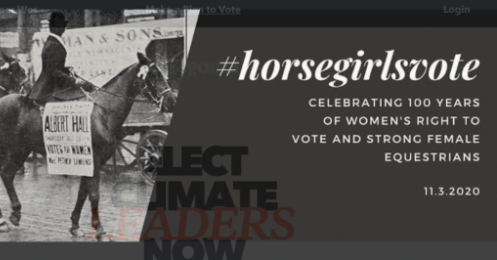 A few nights ago, Shana Gadarian, a political scientist at Syracuse University, was ordering a takeout dinner when the DoorDash app suggested she use the time waiting for her order to “make a voting plan.”

“Thanks, DoorDash,” she said.

As the extended 2020 voting season closes in on Election Day, such messages are inescapable. With banner ads and special photo filters, social media apps like Instagram and Snapchat implore you to vote. Retail clothing companies send emails encouraging civic participation, and they sell merchandise emblazoned with messages to vote.

Large companies like Coca-Cola and Delta Air Lines are incorporating get-out-the-vote messages in their advertising and product design. Even small businesses — the dry cleaners, delis and yarn stores of American cities — are using signs to urge customers to vote.

The ubiquity of the message, along with the wide range of corporate actors embracing it, is new this year, said several researchers and advocates who closely monitor get-out-the-vote strategies. Voting has become cool this year, and nearly every company wants to share in the feel-good glow of a pro-voting message.

The reasons seem to be part pandemic, part the high drama of a highly polarized election, and part pressure from employees and customers.

Susan Tynan, chief executive and founder of Framebridge, which makes custom frames for art and mementos, said she was inspired to expand her company’s civic engagement after talking with other C.E.O.s about surviving the early months of the pandemic.

“There’s just been a shift when C.E.O.s have come together, to say there’s a need for clear communication and planning, and honestly moral leadership,” she said. “So I think we’re all doing our best to try and step in where we can.”

Framebridge has emailed its customers to ask them to vote, and is mailing custom “I voted stickers” in packages with framed art. It’s also one of around 500 companies that have formed a group, the Civic Alliance, to encourage civic participation and to offer workers paid time off for voting.

Many more are offering softer pro-democracy messages. iHeartRadio, which runs local broadcast stations around the country, is encouraging voting in its ads. Craigslist has put a voting request at the top of its classified advertising site. Hooters, the provocative restaurant chain, tweeted a cheeky “vote” message to its customers.

“Corporations are very aware that corporate good will carries with it economic benefits,” said David Becker, the executive director of the Center for Election Innovation and Research. He is also an adviser to the group More Than a Vote, which has recruited N.B.A. teams to offer their arenas as polling places. Mr. Becker, who has been engaged in efforts to expand voter registration and turnout for years, said he recently saw pro-voting messages from a vodka company and a beer brewery. “I don’t care,” he said. “I think it’s great.”

Political science research is somewhat mixed on the effectiveness of this bonanza of electoral encouragement. Get-out-the-vote studies have shown that personal messages about the value of voting are more effective than mass communications. Face-to-face education and discussions tend to work best. Facebook posts from friends seem to help, but not Facebook ads. Handwritten letters are better than impersonal text messages are better than mass emails are better than banners on websites.

“The more authentic and personal, the more effective,” said Donald Green, a professor of political science at Columbia who has conducted dozens of randomized controlled trials of different techniques to boost voter participation.

Snapchat is trying to leverage its popularity as a messaging app to get more young people involved in politics. Four years ago, its campaign to encourage voting featured messages from celebrities, a strategy it didn’t judge to be terribly effective. In the years since, the company has built voter education modules into its program, but it’s also offering special pro-voting stickers and lenses — ways of dressing up photo chat messages — so that friends who communicate using the app can have fun urging one another to participate in the election.

“There’s nothing more powerful than getting these messages from your closest friends,” said Sofia Gross, the public policy manager for Snap Inc., Snapchat’s parent company. Snapchat has helped register around 1.2 million young voters this year, most of whom would be first-time voters; it is working with partners to measure how many of them end up casting a ballot.

A few companies are merging their pro-voting messages with endorsements for particular issues or candidates. Patagonia, the clothing company, has a long history of promoting environmental protection, and its home page now includes an animated plea to “ELECT CLIMATE LEADERS NOW.” David Barrett, the C.E.O. of Expensify, which helps corporate employees file expenses, sent an email to all of the company’s 10 million users asking them to support Joe Biden.

Call Your Mother Deli, a bagel and sandwich shop in Washington, D.C., has asked its customers to support Mr. Biden, though it will give free “Vote” cookies to all who say they have voted. Andrew Dana, the restaurant’s owner, said he was not worried a partisan message would turn away customers.

“I sort of think that’s old-school business thinking, where it’s like toe the line and try not to offend anybody,” he said. “In this day and age, people want to feel a real connection to a brand they support, and if you’re not going to please everybody, you might as well please people who share the same values.”

But over all, the corporate “vote” messages are largely nonpartisan and general, not partisan and specific. Although the country is highly polarized, large and durable majorities of Americans say voting is a good thing. A recent survey from Morning Consult showed that many Americans (including Republicans, although to a lesser degree) would like a company more if it shared a pro-voting message. That means the messages can boost brands while alienating few customers. Whether they will increase voting is less clear.

“There’s very little downside,” said Professor Gadarian, who had already voted when she saw the DoorDash recommendation. “Just the get-out-the-vote message itself, that’s a winner of a message, and it makes them look like they’re socially responsible.”