If Cyrname can run to within 10lb of his best Ascot form on his first start at Wetherby on Saturday, he will make a mockery of odds of around 2-1 for the Charlie Hall Chase.

He looks vulnerable on his first start since February, however, has yet to win left-handed and has not reproduced the huge effort that beat Altior last November in two runs since.

In Vinndication (3.20), Cyrname also faces a potentially top-class young opponent with plenty of scope for improvement. This could be the day when Kim Bailey’s seven-year-old takes a big step towards a run in the Gold Cup in March.

Ascot 1.20 Dr Sanderson is the likely favourite after a win at Plumpton earlier this month but Falco Blitz had the same rating over hurdles, gets 7lb from Dr Sanderson and looks big at around 11-2 for his chasing debut.

Wetherby 1.35 Guy was much improved for a switch to chasing at Huntingdon last time but is up 12lb for a 13-length win. That could leave him vulnerable to Dandolo Du Gite, another first-time handicap winner with plenty of scope.

Ascot 1.55 Plenty with chances but Amoola Gold has a run this season – unlike several rivals – and could be the pick of the prices at around 6-1.

Wetherby 2.10 Verdana Blue would not appreciate any softening of the ground but is a class above her rivals on form and priced up accordingly.

Down Royal 2.25 Several of Ireland’s best staying chasers in opposition, including three who lined up for the 2020 Gold Cup. Presenting Percy, a faller two out, has since joined Gordon Elliott, who also fields Delta Work, fifth at Cheltenham. Chris’s Dream was only 10th there but reverts to three miles today and that could tip the balance.

Wetherby 2.45 Next Destination has not been seen since winning a Grade One novice at Punchestown in April 2018, but he is a fascinating addition to the Paul Nicholls yard and should be fit enough to do himself justice. Shock Stayers’ Hurdle winner Lisnagar Oscar is the obvious danger.

Ascot 3.05 None of these can be ruled out with confidence but fitness could be a factor and Dear Sire arrives off a career-best performance three weeks ago.

Ascot 3.40 Commanche Red did little wrong as a novice and starts his second season over fences on a decent mark, though Black Corton, returning after a wind op with regular partner Bryony Frost, is one of several live dangers.

Envoi Allen extended his unbeaten record to nine races with a convincing success in his first start over fences at Down Royal on Friday, jumping quickly and accurately on the way to a six-length victory at odds of 1-14.

It was stress-free viewing throughout for punters who took the short odds for a return of seven pence for every pound.

Jack Kennedy, who was riding Envoi Allen for the first time, was happy to take a lead in the middle part of the race before taking over on the run to the third last. He let out an inch of rein on the run to the final fence and Envoi Allen lengthened before clearing it impressively to complete a flawless round of 13 jumps. 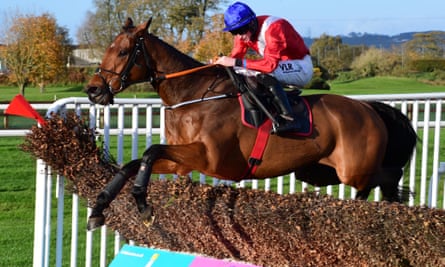 “I was very impressed with him, I thought he did everything right,” Gordon Elliott, Envoi Allen’s trainer, said. “He ought to have won the way he won but the way he jumped, he popped them and down to the last was the most impressive. But as good as it is having these horses, it’s nervous enough watching them.”

“It’s nice to get him back with a clear round, he was bought to be a chaser and he’s a horse to really look forward to.”

Envoi Allen is owned by Cheveley Park Stud, which announced on Friday it will cut its Flat string of around 80 horses by 20% in the 2021 season.

The star of their jumping operation, though, should continue to carry their colours with distinction during the winter and is now expected to step straight into Grade One company in the Drinmore Novice Chase at Fairyhouse – the race in which Elliott’s Samcro was a faller after an impressive start to his chasing career at Down Royal last year.

“It was one of those things with Samcro, he jumped well before and after, he just happened to fall on the day,” Elliott said. “It looks the obvious race to go for now.”

There was a setback for Elliott earlier on the card as Abacadabras, the runner-up to Shishkin in the Supreme Novice Hurdle at Cheltenham in March, failed to justify a starting price of 8-15 for the WKD Hurdle, finishing four and a half lengths behind Henry de Bromhead’s Aspire Tower.

Rachael Blackmore’s mount made all the running and quickened away from Abacadabras after a slick jump at the final flight. The winner was cut to 14-1 (from 50-1) for the Champion Hurdle by Paddy Power, who also pushed out Abacadabras, from 5-1 to 8-1.