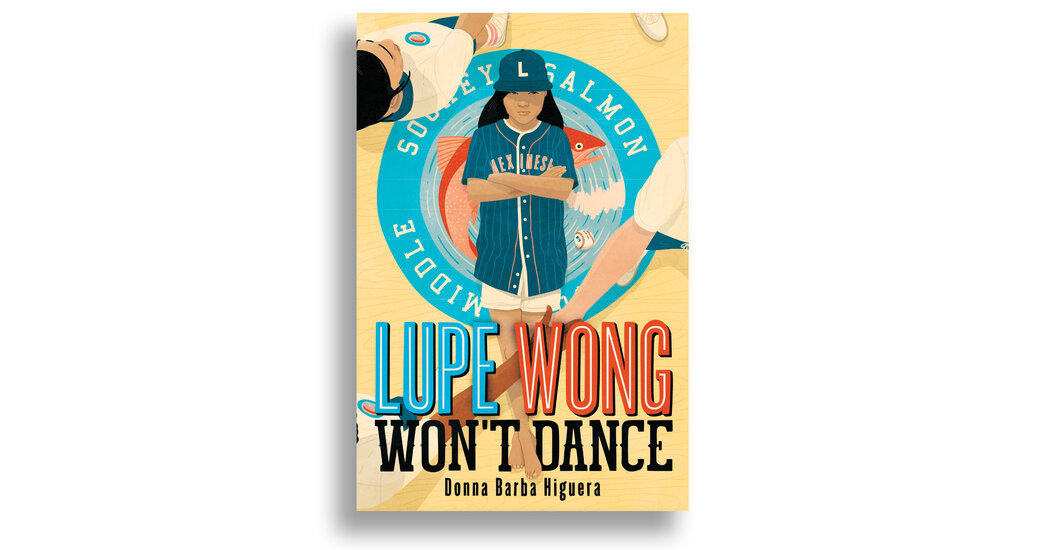 Great works of American literature often begin with an unforgettable sentence. Joseph Heller’s “Catch-22”: “It was love at first sight.” Ralph Ellison: “I am an invisible man.” How about “Call me Ishmael”?

Well, make way for Donna Barba Higuera, whose debut novel opens with “My gym shorts burrow into my butt crack like a frightened groundhog.”

Welcome to “Lupe Wong Won’t Dance,” an uproarious debut about a well-intentioned seventh grader named Lupe who dreams of joining the major leagues. Lupe’s uncle works for the Seattle Mariners and has promised to introduce her to the pitcher Fu Li Hernandez as long as she makes straight A’s.

She’s well on her way to fulfilling her end of the bargain when Coach Solden announces that square dancing will be their next gym activity. Lupe is athletic and competitive — but square dancing? No, thank you. “Square dancing belongs somewhere far away where it can’t embarrass anyone, like the 1800s,” she says.

Lupe may be able to throw fastballs, but she has no rhythm. When square dancing threatens to compromise her straight A’s, she must find a way to make it stop.

Luckily, Lupe has never shied from a challenge. All she has to do is find a reason square dancing is detrimental to seventh graders. But when she makes the case to Coach Solden that square dancing is not recognized as an Olympic sport, Coach reminds her that baseball isn’t, either (though it will be next year). And when she questions the “hygiene aspect” of holding hands, Coach laughs and says, “This coming from the girl who holds the snot-rocket distance record.”

When she learns that only boys can choose their partners — and they can only ask girls, who are obligated to say yes — she believes she has enough fodder to topple do-si-dos for good.

In the context of middle grade literature, Higuera’s novel delivers on virtually every level. It’s remarkably funny, but many of the moments of levity are meaningful. Lupe misses her father, who died years before, and readers learn that her admiration for Fu Li Hernandez is tied to this loss.

The novel is inclusive and authentic. Lupe is a particularly endearing narrator. Like any well-developed character, she is flawed but evolving, unique but universal. The way Lupe interacts with her school tormentor, Samantha, is refreshing. Although Samantha is clearly a bully, Lupe treats her as more of a nemesis and never shrinks in her presence. Lupe can be frustratingly selfish, but she is deeply loyal and kind to her friends.

There are also subtle moments that add richness to the narrative. When Lupe argues against the heteronormativity of square dancing, for example, readers get a glimpse into how this personally affects Coach Solden.

Although Lupe goes so far as to look for “stats on deaths during square dancing,” her research never leads her to the fact that Henry Ford forced square dancing into the national curriculum as a way to offset nonwhite influences on American culture. An interesting omission, considering the overall tenor of the book. Nonetheless, what starts as a self-serving mission for Lupe becomes something far greater for herself and, ultimately, her readers.

This book has wide appeal and offers something we all desperately need: light and laughter. Higuera has knocked it out of the park.