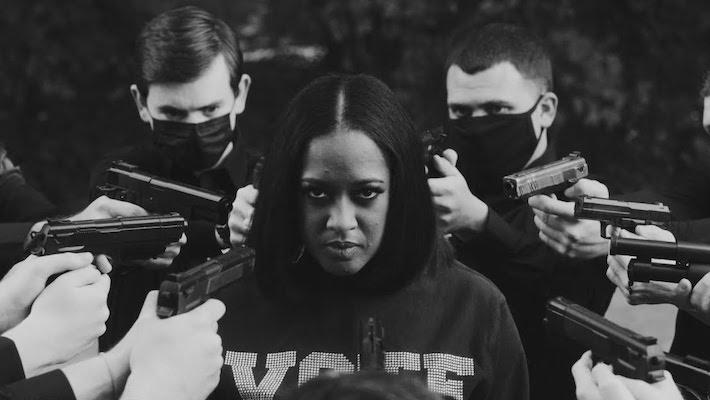 Back in August, Rapsody celebrated the one-year anniversary of her critically acclaimed third album, Eve. While it apparently won’t be a while before Rapsody drops off anything for a future solo project, the rapper did give fans a new song last month with her ominous track, “12 Problems.” The track landed a spot on Roc Nation’s Reprise project, one that also featured Jorja Smith, Ty Dolla Sign, D Smoke, Buddy, and more. More than a month after she gave fans the single, Rapsody returns with a combative video for “12 Problems.”

The visual begins with a young girl dancing in front of a photo shot by photographer Yvette Glasco’s “Don’t Let Go” while Ambre’s “Revolution” plays in the background, a song that also appears on Reprise. After nearly two minutes, Rapsody appears alone at a shooting range where she stands confidently while taking shots at the racial disparities in the world which include police brutality and social injustice.

At this year’s BET Hip-Hop Awards, Rapsody participated in the Political Cypher alongside Flawless Real Talk, Polo G, Chika, and Jack Harlow. At the award show, also went home with a win in the Lyricist Of The Year category.

Check out the “12 Problems” video above. Reprise is out now via Roc Nation. Get it here.