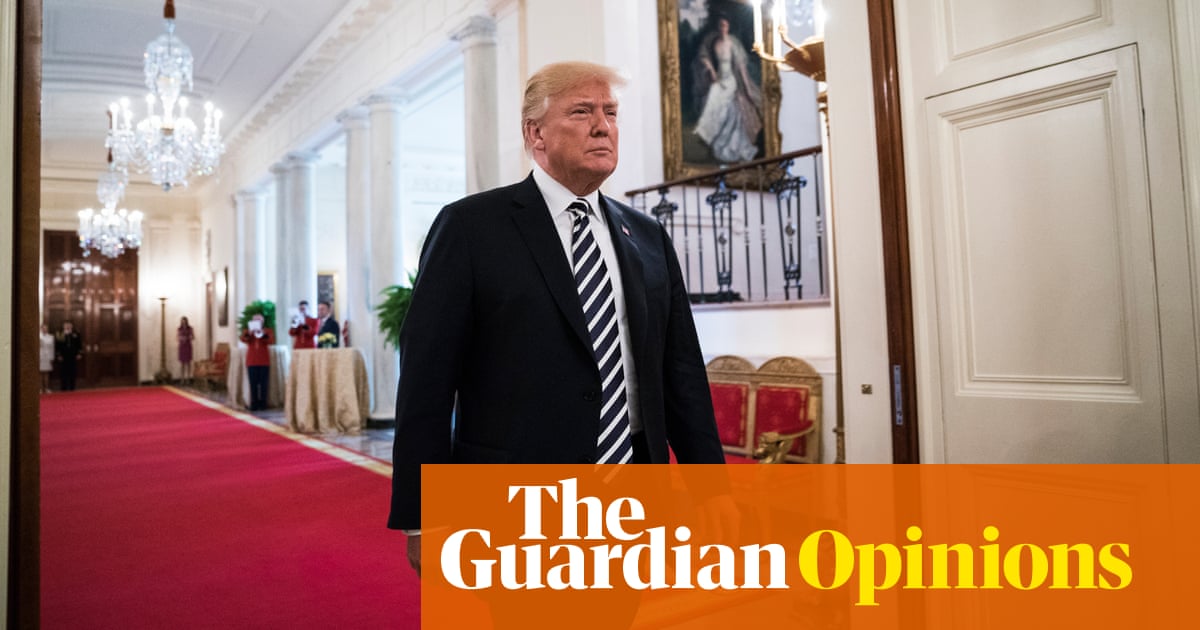 The other night I watched The Trump Show – the new BBC series about, oh, go on, have a guess. I do recommend it as a kind of This Is Your Life experience, and by “Life” I mean “the past four years, which your poor brain, has desperately tried to forget in real time, like the broom dog in Alice’s Adventures In Wonderland, sweeping away the path as he goes”.

You’d think watching a documentary about Trump would pummel you into a state of catatonic depression but, actually, it’s like going through an old school yearbook, looking at photo after photo of people who held such an outsized position of importance in your mind at the time, but whom you’ve totally forgotten about since: “Oh yeah, Sean Spicer! Scaramucci! Reince Priebus! Whatever happened to those guys?” you shout from the sofa. Trump goes through men faster than Jessica Rabbit, and if I had to describe the experience of watching The Trump Show in one sentence, it would be, “Oh yeah, that guy!”

Of course, watching it now, before the election, the question is whether the documentary captures some weird blip in time, or the beginning of the apocalypse. You’ll probably be amazed to know that I’d prefer the former. In fact, if it were really up to me, I’d like the past four years to be like the opening scene in the classic 1991 comedy King Ralph, in which the entire royal family is accidentally electrocuted, resulting in John Goodman becoming the king of England. I’m not saying I want all of the Trumps and everyone associated with them to die (although I wouldn’t say no to Goodman taking charge of the country). But when we all wake up next Wednesday morning, I would very much like the past four years to be erased and for us all to agree to pretend they never happened and never to mention them again.

And so, to achieve that end by legal means as opposed to murderous ones, I sent in my overseas ballot last week. I posted it with my twin boys, who are now five, because these days going to the post office counts as quite an exciting outing, and you don’t say no to one of those during a housebound half-term. But there were other reasons, too. They were barely toddlers during the last election, and I remember thinking – on that innocent, calm-before-the-hellscape day of 7 November 2016 – how cool it was that the first president my children would remember, their formative president, would be President Hillary Clinton. Insert hollow laugh here. Well, now their baby sister is wearing the poignantly tatty Clinton 2016 onesies (tatty, like my hopes and dreams), and the boys are asking questions about who the president is and what he’s like. And I had thought the conversation to dread was how their sister got in mummy’s tummy in the first place. (That one, in fact, turned out to be very easy – like all high-quality parents, I lied and said I ate her, and they accepted that with little apparent surprise. But Donald Trump is harder to explain than maternal cannibalism.)

In the hormonal fug after their birth, it felt desperately important to get US citizenship for my twins, in the same way I was determined to include my surname in their names somehow. It was something to do with stamping an identity on them – my identity, I guess, or the one I’d grown up with. Within a year, I was bitterly regretting the whole citizenship thing, and not just because I realised I’d saddled my kids with the hell that is paying US taxes for the rest of their lives. It turned out I’d also saddled them with a president who outdoes any Philip Roth satire, and who probably paid less in tax at the age of 72 than my children did at the age of one.

So here we are, four years later, and I’m explaining to them why I’m ticking this box on the ballot and not that one. “We’re making good Joe the king, and not bad Donald!” they tell everyone in the post office. And, monarchy aside, that does sum up the situation as I see it. But how will I explain it to them if the bad guy wins? A small part of me broke for ever on the morning of 9 November, when everything I thought I understood about my past, present and future proved untrue and Trump won. If I felt like that at 38, how will a pair of five-year-olds feel if I have to tell them that, contrary to what their parents taught them, being good doesn’t always get you what you want. Sometimes the bad guys finish first. Five seems a little young for innocence to be shattered.

Or maybe not. When I solemnly explained to them that good Joe might not be president next week – it really might be bad Donald – they took the news pretty much in the same way they took the revelation that their mother eats babies: mild consternation, shrugging acceptance, swift uninterest. They then turned back to the more pressing matter of Hey Duggee, and the only person looking anxious, confused, miserable and scared on the sofa was me.