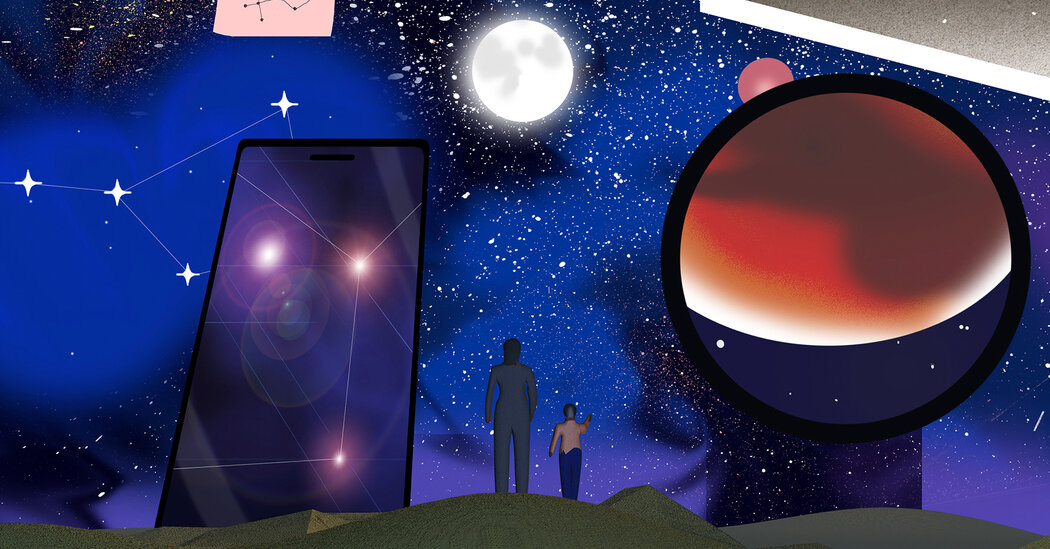 As a little girl growing up in Portugal, Raquel Nuno made birthday wishes upon shooting stars. She was born near the peak of the Perseids meteor shower, one of the most prolific annual cosmic light shows. Every year her father whisked her and her family away to the beach to celebrate under the celestial fireworks. There, she gazed up at the dazzling display amid a backdrop of stars as countless as the grains of sand at her feet.

“I fell in love with the night sky,” said Nuno. “It just made me think about our universe and my place in it.”

Now, a planetary scientist at the University of California, Los Angeles, Nuno ponders the cosmos professionally. She studies impact craters on the moon using tools aboard NASA’s robotic spacecraft orbiting the moon.

“I found my passion — my calling — because he brought me out to look at the night sky,” she said of her father.

She’s not alone, many kids go through an astronomy phase. Even if yours doesn’t dream of becoming an astronaut, taking them stargazing and planet-watching is a great way to spark their imagination and help them fall in love with the universe around them. Astronomers, after all, are grown up kids.

This Halloween weekend is a particularly good time to start looking to the stars — on October 31, there will be a full moon and a parade of visible planets. If you plan to explore the night sky with your kids, here is some advice from astronomers to mesmerize them with that cosmic movie theater in your backyard.

The best way to begin your astronomical adventures is with the moon. It’s easy to spot and doesn’t require any fancy equipment to enjoy. On Saturday, October 31, there will be a spooky full moon — the second of the month, which is called a Blue moon.

“The moon is a really great opportunity for parents to engage their kids in the night sky because it always puts on a show no matter where you live,” said Nuno. Even if you miss it at its biggest and brightest, you can take your kids and look as its phases get progressively smaller: quarter, gibbous and crescent. Try to make a lunar calendar with them by bringing paper and markers and drawing the phases of the moon you see every night for 28 days.

With their naked eyes, your kids can spot its craters and dark regions. While you watch, Nuno said to tell them the dark spots are remnants of ancient volcanic plains that once spewed magma across the lunar surface. Have them imagine what it looked like billions of years ago, an oozing, molten mess.

The next steps for rookie astronomers are the planets. Throughout November eager stargazers will be able to spot five planets in the sky without a telescope.

Start with Mars. Since early October the red planet has glowed like an amber honey drop in the night sky, which you may have already noticed. That’s because the planet neared opposition (the point where Earth was directly between it and the Sun) and its closest approach to Earth around mid-October. Look for Mars in the southeast sky, it will be the brightest thing in the eastern half of the heavens (that isn’t the moon, of course).

After you marvel at Mars, search for Saturn and Jupiter. They’ll be the two bright dots dancing next to each other to the west. Jupiter will outshine its ringed cousin and be the brightest non-moon object on this half of the sky. On December 21 the duo will be at their closest to each other in the night sky since 1623, according to Earthsky. A fun fact to share with your kids, after you tell them about Saturn’s rings, is that the gas giant is less dense than water, meaning if one could find a big enough tub, it would float (though some say its rocky core would sink).

Those three planets will be visible at night, but if your kids are willing to get up early, you can watch Venus before sunrise on Sunday morning (and Mercury later in week, though hard to spot). Venus is the brightest planet so it’ll be easy to spot. If you get them out of bed, tell your kids that it is so hot there, metal melts on the surface of Venus, making it hard to explore with space probes.

Mercury should be meandering somewhere below Venus. It’ll be harder to point out, but with enough patience you should be able to make it out before the sun’s light swallows it.

Zoom in a little.

To take your planetary viewing experience to the next level, grab a good pair of binoculars, said Meg Thacher, an astronomer at Smith College in Massachusetts and author of the children’s book “Sky Gazing: A Guide to the Moon, Sun, Planets, Stars, Eclipses, and Constellations.” (You can find binoculars at a range of price points on Wirecutter, a New York Times company that reviews consumer products.)

Thacher recommended binoculars because telescopes can be expensive and, if you’ve never used one before, frustrating for everyone.

“You can’t just point at a random spot in the sky and expect great things to happen with your telescope,” said Thacher. “It’s mostly black.”

But if you do know how to work a telescope, then come Saturday night, set your sights on Uranus as it nears opposition, when its relation to the Sun makes it particularly bright. The full moon will outshine Uranus, but you might still see it with your naked eye. Then tell your kids how scientists have found hydrogen sulfide up there, meaning that yes, Uranus does smell like farts.

“There is no end to the Uranus jokes,” said Thacher.

Connect the cosmic and cultural dots.

Before you move beyond the planets to the actual stars of the night sky, consider using an app or some software like Skyguide, Stellarium, or Google Sky, that can map out planetary and star positions for you. They take out a lot of the guesswork and allow you to hand your phone off to your kids so they can get better acquainted with the constellations.

Often constellation patterns can be tricky to piece together. If you’re looking for an easy one to spot, Jackie Faherty, an astrophysicist at the American Museum of Natural History in New York, suggested starting with the Big Dipper. Most people in the Northern Hemisphere have seen this, just scan the northern sky for seven bright stars grouped together. Three will be in the shape of a handle and the other four will look like a rectangle.

Once you know what to look for, the Big Dipper comes to life. After you spot it, look at the two stars in the cup that are furthest away from the handle, where the water might pour out of it. These are the pointer stars: Merak, on bottom, and Dubhe, on top. If you draw a straight line from Merak to Dubhe and out of the cup, you’ll land on Polaris, which is the North Star. With Polaris in your sights you now have the handle of the Little Dipper. Faherty suggested mapping this out on paper with your kids in the sky.

Two more stars you and your kids can find, with the help of the Big Dipper, are Arcturus and Spica. If you follow the curve of the Big Dipper’s handle away from its cup, you’ll be led to the beautiful red Arcturus. “You ‘arc’ to the star Arcturus,” said Dr. Faherty. After arriving at Arcturus, go down in a straight line, or as Dr. Faherty said, “Spike down from it to the star Spica, which is this beautiful blue star, very bright.”

Arcturus is in the constellation Boötes and Spica is in Virgo, so you’ve now found two additional constellations.

Dr. Faherty said a fun test to try with your kids now once you’ve found the Big Dipper is to tell them about the stars Mizar and Alcor. Mizar is the second star from the outside, on the Big Dipper’s handle, and hiding behind it is its buddy Alcor. Ancient Romans used to test the eyesight of their troops by pointing to Mizar and asking them how many stars they saw. If someone answered with two, they were supposedly deemed to have good eyesight and could be a guard or archer. See if your kids would pass the test.

Read Stories in the Sky

The best part about finding constellations is all the different stories cemented in their stars.

“The fall season is the big showcase in the sky where there’s a famous mythological story that we tell,” said Dr. Faherty. Look for Perseus riding in on Pegasus. As the story goes, he saved Princess Andromeda from Cetus the whale, while carrying Medusa’s head, all of which appears in the stars.

Stargazing is also a wonderful opportunity to introduce children to cultures they might not be acquainted with. What many call Orion’s Belt, for example, is known to the Lakota Native Americans as “Tayamni Cankhu” or as the spine of a bison. Those same stars are seen by the Chinook Native Americans as a canoe racing another boat — what many people know as Orion’s dagger — in the Big River, or the Milky Way. The Ojibwe Native Americans have a constellation that includes Orion called Biboonkeonini, or the Wintermaker.

The Wiradjuri people, an Australian Aborigional nation, referred to the Milky Way as Gugurmin, a giant celestial Emu, said Kirsten Banks, an astrophysicist at the University of New South Wales in Australia and a member of the Wiradjuri nation. Its position in the sky helped inform people about the best time to go hunting for emu eggs, said Banks.

Wait for the Show.

Perhaps the best time to bring your kids to stargaze is during a meteor shower. The Orionids are tapering off, but the next shower to peak will be the Leonids around November 16 and 17.

Not everything that streaks across the night sky is a falling star. Some are satellites, blinking in the dark. Searching for satellites with your kids also allows you to reflect on something called “space debris,” pollution caused when spacecrafts break down and clog up space.

“We probably track about 26,000 things, ranging in size from a cell phone to the space station,” said Moriba Jah, an astrodynamicist at The University of Texas at Austin. “Of the 26,000, only about 3,000 things work, and everything else is garbage.”

Light pollution also obstructs the night sky. About 80 percent of Americans cannot simply gaze upon the Milky Way from home. If you’re fortunate enough to live somewhere very dark, or you can travel to a dark spot, take the time to talk with your kids about how our night sky needs protection. “If we’re losing all those stars, we’re losing all those stories,” said Banks.

The best way to preserve those stories is to pass them on to the next generation. Stargazing is an opportunity to show and share the wonders of astronomy with kids who are already interested in space and those who just need a little push. Make it fun and encourage them to play with their imaginations as they look up. “That will make them want to do it more,” said Nuno, “and it’ll become a special thing that you did with your kids that they’ll always remember.”

Are your kids more into dinos than the night sky? Check out a paleontogist’s guide to playing with your dino-obsessed kids here.

Nicholas St. Fleur is a former science reporter for The New York Times and the author of the children’s book “Did You Know: Dinosaurs?”