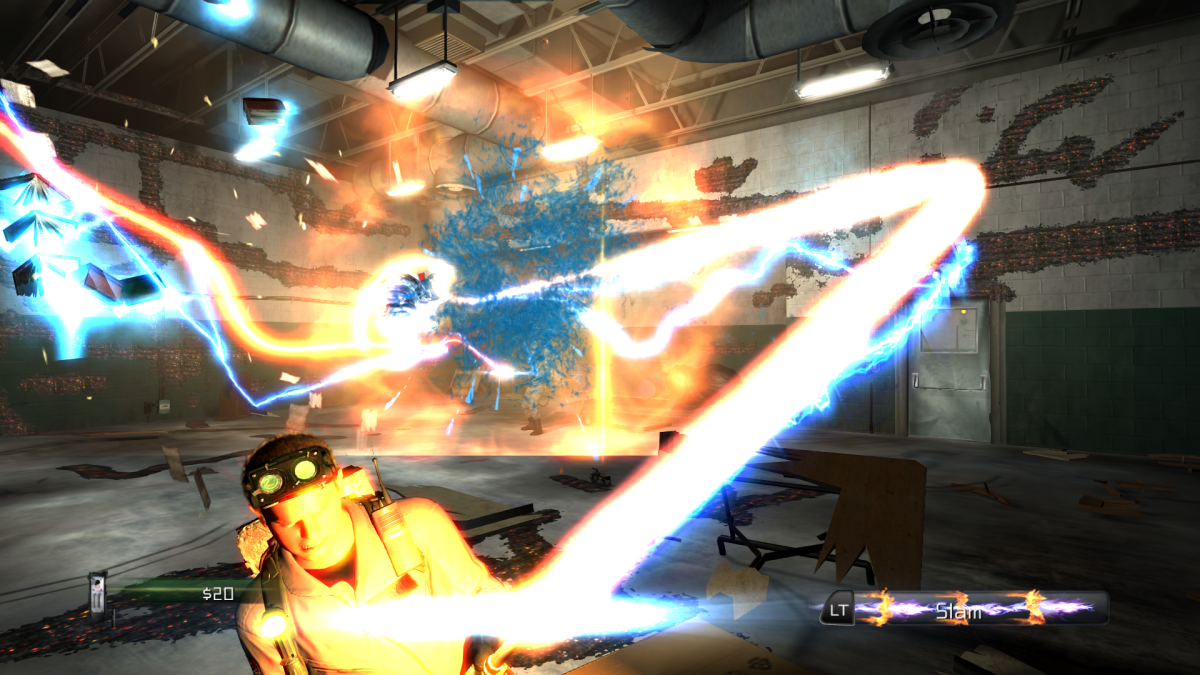 This Halloween Epic Games is giving away Ghostbusters Remastered for free, and do not pass this opportunity up. I wouldn’t go as far as to call it a classic, but this is the Ghostbusters 3 we never got, and now never will.

Ghostbusters: The Video Game Remastered adds only one thing to the 2009 original: a title card at the end of the opening sequence which reads ‘Dedicated to the memory of Harold Ramis.’ Ramis died in 2014. Dan Aykroyd and Ramis were the co-writers, lead actors, and animating spirits behind Ghostbusters, and played off each other as actors: Ray Stantz bursting with energy and almost childishly excitable, Egon Spengler the deadpan genius who collects spores, molds and fungus.

There is a leaked script for Ghostbusters 3: Hellbent, written by Dan Akroyd and Harold Ramis, which spent the ’90s in development hell, and never got off the ground. There are other, later scripts that aren’t known outside of the fact that they exist. And then there’s Ghostbusters the Video Game, which seems to have come along at just the right time.

Ghostbusters Remastered is not Hellbent, and I obviously don’t know what it shares with the other unmade scripts: It seems fair to speculate that the latter part of the game is inspired by some of these ideas. But what is special about it is that, Rick Moranis and Sigourney Weaver aside, all of the original cast reprise their roles. This comes with the smart decision to make the player part of the team, but not one of the original team: an anonymous, mute rookie.

Ghostbusters was always about the team: Stantz and Spengler riffing on intellectual phantasmagoria, while Venkman and Zeddmore believed but lived more in the real world. Perhaps this seems like over-thinking something like Ghostbusters.

Here’s a making-of documentary where Akroyd and Ramis discuss the game, and what is abundantly clear is that they cared about it. The perception was always that Bill Murray would never do another Ghostbusters… but he did this.

Next year’s Ghostbusters: Afterlife looks to be constructed around Egon’s legacy, and perhaps with some digital trickery we’ll see Ramis’s ghost, and that could be nice. But Ghostbusters Remastered is both a love-letter to the movies, and the final time the Ghostbusters rolled-out as the original four-piece.

The game does it justice. The first half is a re-run of everything you loved from the movies, with the first mission having you bust Slimer in a hotel, destroying a ballroom in the process, before zapping the Stay-Puft Marshmallow Man while dangling from a skyscraper on a bungee cord. If this sounds like fanservice it’s exactly what it is, and what I wanted from it.

Ghostbusters Remastered is not a shooter, even though you aim your proton wand at things and press fire, and generally that works. You’re almost always with a team, who help whittle the ghost down and then it becomes a lasso game: the most fun part, as you wrangle intractable ghosts into the trap. This is why Ghostbusters the videogame works. It understands what makes this particular team unique, and how to build a game around it. You don’t kill ghosts, you wear them down and trap them.

The game also asks the player to switch to the first-person PKE mode frequently, and delights in using this to pop out some scares. At some times you’ll be with all the Ghostbusters, and at others only with one or two—or even alone. Uh-oh.

There are games that age badly, and then there’s Ghostbusters. At the time many, quite naturally, focused on what it didn’t do well. Over a decade later it’s clear that it got the most important things right. This has the atmosphere, it stands up now, and you should download it for free because… we’re ready to believe you!