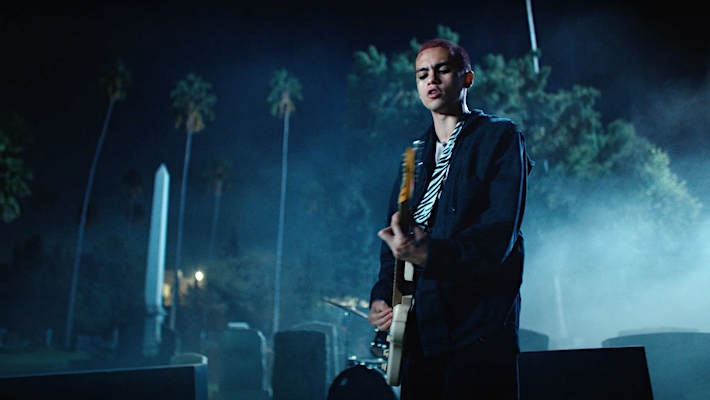 Dominic Fike released his aptly-titled debut record What Could Possibly Go Wrong in July. Though having his first record drop during a pandemic has hindered much of his original release plans, Fike is still making the most of it.

In the last few months, the singer joined Halsey to film a video for her Manic track “Dominic’s Interlude,” appeared in Anderson .Paak’s hit visual “Lockdown,” and even performed an hour-long concert in Fortnite. Now, the singer returns just in time for Halloween with a spooky visual to his track “Vampire.”

Directed by Jack Begert, the visual depicts Fike as a real-life vampire. The singer and his entourage hit up a costume store to find the perfect disguise for a party, but he instead ends up finding the perfect date. Before showing up to the event, Fike leads his new love interest to a graveyard where he gives a brief performance of the track, complete with an impressively staged backflip.

Once at the party, Fike’s date realizes something is awry when a cut on her finger causes the entire crowd to look hungrily in her direction. The visual also pays brief homage to Michael Jackson’s iconic “Thriller” video as the cast busts out a few of the iconic moves in formation.

What Could Possibly Go Wrong is out now via Columbia. Get it here.