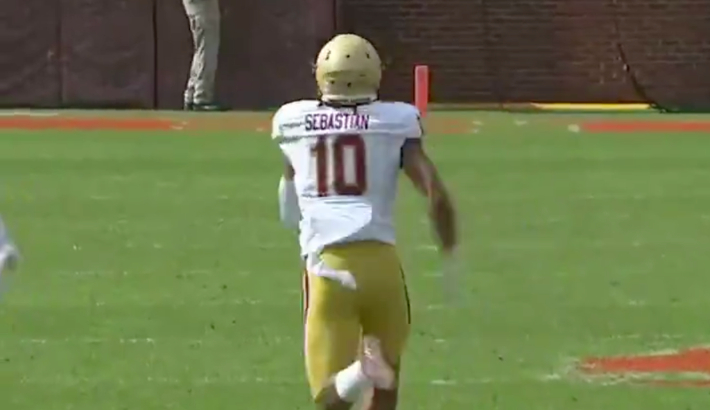 Clemson had to go into Saturday afternoon’s tilt against Boston College without star signal caller Trevor Lawrence, who was sidelined with COVID-19. In his stead, the Tigers turned to former five-star recruit DJ Uiagalelei, and while there were some obvious concerns about sliding a youngster in during any conference game, a Eagles defensive touchdown had more to do with the Tigers’ usually sure-handed running back making a mistake.

Facing a 14-7 deficit, Clemson had the ball on the doorstep and turned to standout running back Travis Etienne. While he is usually as reliable as they come in these moments, the Boston College defense blew up Clemson’s front at the point of attack and swarmed the All-ACC back. As a result, the Eagles forced a fumble, which was scooped up by Brandon Sebastian.

Instead of falling on it and retaining possession, Sebastian was able to scoop the ball up and burst in the opposite direction. No one on Clemson’s offense was able to lay a finger on him, and as a result, the Eagles went up two scores.

Obviously it was an outstanding play by Sebastian, but even more impressive was what this meant for the Tigers. Not many teams have been able to get any separation from them in recent years, but for the first time since 2014, a team went up on them by two scores in a regular season tilt.