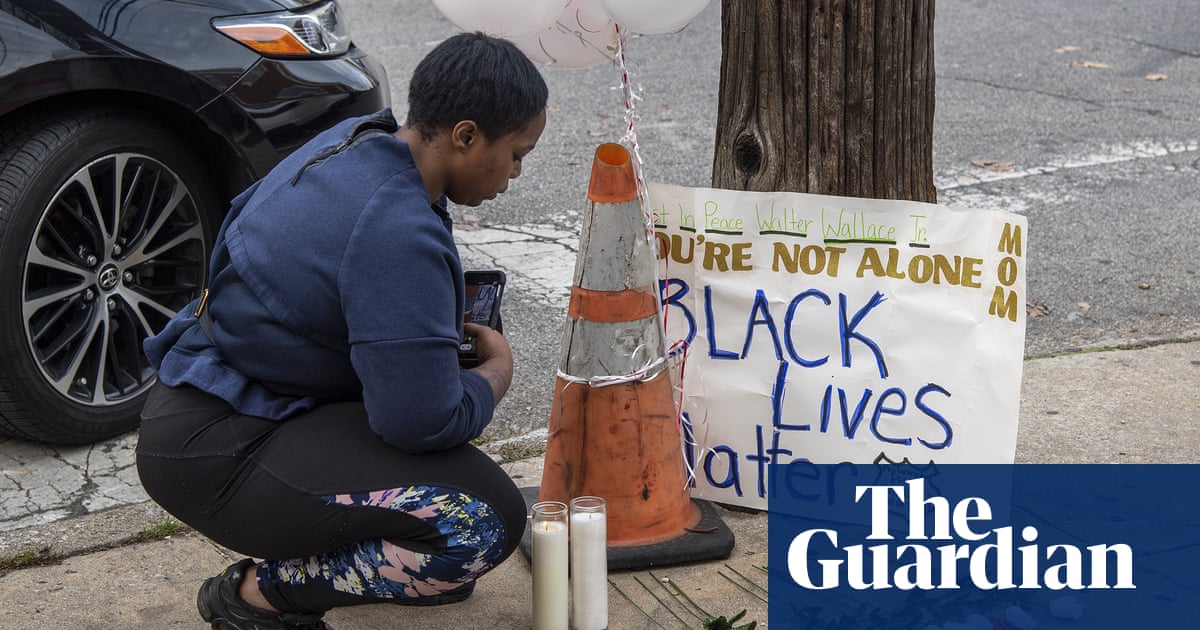 Footage from the body cameras of the police who fatally shot Walter Wallace Jr in Philadelphia earlier this week shows a person in “obvious mental health crisis” before an officer told the other to “shoot him” and they both opened fire, the family’s lawyer said.

Attorney Shaka Johnson, who watched the footage on Thursday, said it also shows chaotic scenes in which onlookers, including Wallace Jr’s wife and mother, alerted Philadelphia police to his mental state and pleaded with them not to open fire before they shot at him 14 times.

The death of Wallace Jr, a 27-year-old Black man, who was killed outside his home in west Philadelphia after his family called for an ambulance, has prompted protests in Philadelphia, as well as other US cities, as police admitted they do not have the right resources to handle mental health problems.

Johnson said Wallace was almost immediately incapacitated after the first shot by police, who were positioned “approximately a car length-and-a-half” away from the victim.

“What, other than death, did you intend when you shoot a man, each officer, seven times apiece?” he said at a press conference on Thursday afternoon, also attended by Wallace Jr’s mother, Kathy Brant, and his father, Walter Wallace Sr.

He said when Wallace came out of the house and on to the street, where, seconds later, police shot him, he did not appear to say anything.

“It seems to be a person in sort of a cloud or a stupor or just not appreciating the gravity of that particular moment,” he said.

The family has said Wallace had bipolar disorder and had been taking a mood stabiliser, lithium.

Johnson said he had “grave issues” with the way police handled the situation. While he said Wallace Jr was holding a knife, it “does not give you carte blanche to execute a man”. He said the video did not show him “lunging at anyone”.

Amid screams not to shoot and that he was mentally ill from his family, and an attempt by his mother to grab him, Johnson said: “What you will hear from one of the officers is ‘shoot him’.”

Although Wallace’s family, who have also watched the footage and listened to 911 audio recordings, believe they have been failed by the city, they are not calling for police officers to be charged with murder, Johnson said.

“Here’s why: they were improperly trained and did not have the proper equipment by which to effectuate their job,” he said.

The officers did not have Taser stun guns, police commissioner, Danielle Outlaw, has said.

Philadelphia’s mayor, Jim Kenney, and district attorney, Larry Krasner, said the calls, footage and a history of police responses to the home would be made public by the end of next week. Johnson said he had hoped they would release the footage on Thursday.

Johnson said Wallace’s funeral has been scheduled for 7 November.

Following protests and some incidents of looting and burglary earlier in the week, the city was put under curfew, which ended on Thursday, and Kenney has said he plans to deploy the Pennsylvania national guard on Wednesday to guard businesses and assist police.

It comes as the nation’s largest police union has been accused of taking a young boy from the back seat of a car after breaking the windows and violently arresting and injuring his mother, who was later released without charges, during Tuesday’s unrest in Philadelphia, and then misusing a photo of the child as “propaganda”.

The Fraternal Order of Police (FOP) reportedly shared a photo of the boy, in a now deleted tweet and Facebook post, in the arms of a Philadelphia police officer with a caption claiming the child was “lost during the violent riots in Philadelphia, wandering around barefoot”.

“The only thing this Philadelphia police officer cared about in that moment was protecting this child,” it reportedly said.

But lawyers for the boy’s family say the story was completely made up, reported the Washington Post.

Philadelphia police said they had no comment about the picture, but that an investigation was under way into the incident and that “the officer(s) involved is on restrictive duty pending the investigation.”

A FOP spokeswoman said the photo was immediately taken down after it “learned of conflicting accounts of the circumstances under which the child came to be assisted by the officer”.