The two US presidential candidates swung through northern battleground states on Friday amid signs that the coronavirus pandemic was once more threatening to overcome hospital capacity in several US regions.

Donald Trump was due to hold a succession of airport rallies in Michigan, Wisconsin and Minnesota, while Joe Biden was scheduled to have drive-in rallies in Iowa, Minnesota and Wisconsin.

The trip to Minnesota marked a rare defensive move for the Democratic challenger, who held a low double-digit lead in new polls published with four days left of the election campaign. Hillary Clinton narrowly held Minnesota in 2016 and the latest polls show Biden with a five-point margin.

But he told reporters: “I don’t take anything for granted. We’re going to work for every single vote up until the last minute.”

The president insisted the state was vulnerable.

“I think it’s going to flip for the first time since 1972,” he said, claiming he had stopped rioting there following the police killing of George Floyd in May, which sparked the Black Lives Matter protests.

Before setting out from Washington on Friday morning, Trump railed against the supreme court for ruling to allow election officials in North Carolina to accept votes received by 12 November as long as they are postmarked by 3 November.

“This decision is CRAZY and so bad for our Country. Can you imagine what will happen during that nine day period,” Trump said on Twitter.

He has been similarly critical of a parallel supreme court decision this week to allow Pennsylvania to extend its count. His new appointee to the court, Justice Amy Coney Barrett, did not take part in the decisions as, according to the court, she had not had time to review the arguments.

Behind in the polls, the Republicans have put significant effort in campaign endgame focusing on procedural and legal attempts to suppress the turnout or the vote count. Trump has said he wants a result on 3 November, but by law states have until 8 December to finalise their returns. 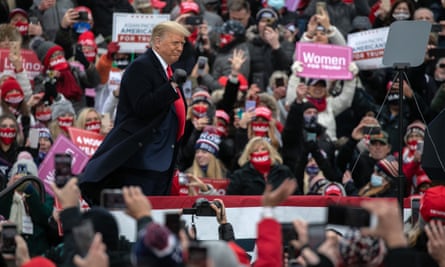 The president has sought to concentrate his message on law and order and on the economy, highlighting economic data that showed a substantial rebound in the third quarter of 2020. But the shadow of coronavirus was hard to avoid.

The number of new daily cases reached a record high on Thursday,

There were 88,521 new cases of the coronavirus reported in the US on Thursday, according to data from Johns Hopkins University – 9,540 more cases than Wednesday. Total US cases were expected to hit 9m, with the death toll closing in on 230,000.

Healthcare statistics, which the Trump administration classified but were obtained by National Public Radio, showed hospitals in Atlanta, Minneapolis and Baltimore, reaching 80% capacity, while certain hospitals in Tampa, Birmingham and New York were over 95% capacity in intensive care beds.

Trump’s standing has been hit by his insistence on playing down the seriousness of the pandemic but he showed no sign of changing course on Friday, complaining that the Minnesota authorities had limited the size of his rally there to 250.

He told a mostly mask-free crowd in Waterford Township: “You have to open up your states. We gotta get our governor to open up our state here, don’t we? Don’t worry, on November 4, all these Democrat-run states will be open.”

Recent coronavirus testing in the state has shown a 12% positive rate, and large numbers of hospital staff are reported to be off work because of infection.

The president’s son, Donald Trump Jr, told Fox News on Thursday night that the Covid-19 death toll now was “almost nothing” and that critics of his father’s hands-off approach were “truly morons”.

The contenders embarked on their northern swings with the election already more than half over, in voting terms. About 84 million people are reported by the US Elections Project to have already voted, by postal ballot or early voting in person, 61% of the total turnout in 2016. In Texas and Hawaii, that figure was over 100%, meaning more people had already voted than the total turnout four years ago.

Going into the weekend, Biden held a comfortable, nine-point national lead in polling averages, and multiple recent polls have depicted an even larger lead in the popular vote for Biden. In the latest Opinium Research/Guardian poll, released on Friday, Biden led Trump by 14 points, 55-41.

The poll, which surveyed 2,009 US adults online from 26-29 October, found severe deterioration for Trump among some of his most reliable supporters, including white voters, a group he won by 15 points in 2016, and which no Republican presidential candidate has lost for 50 years. Biden holds a narrow, 49-47 lead among white voters, the poll found.

The poll additionally found that a 57% majority of likely 2020 voters who did not vote in 2016 supported Biden.