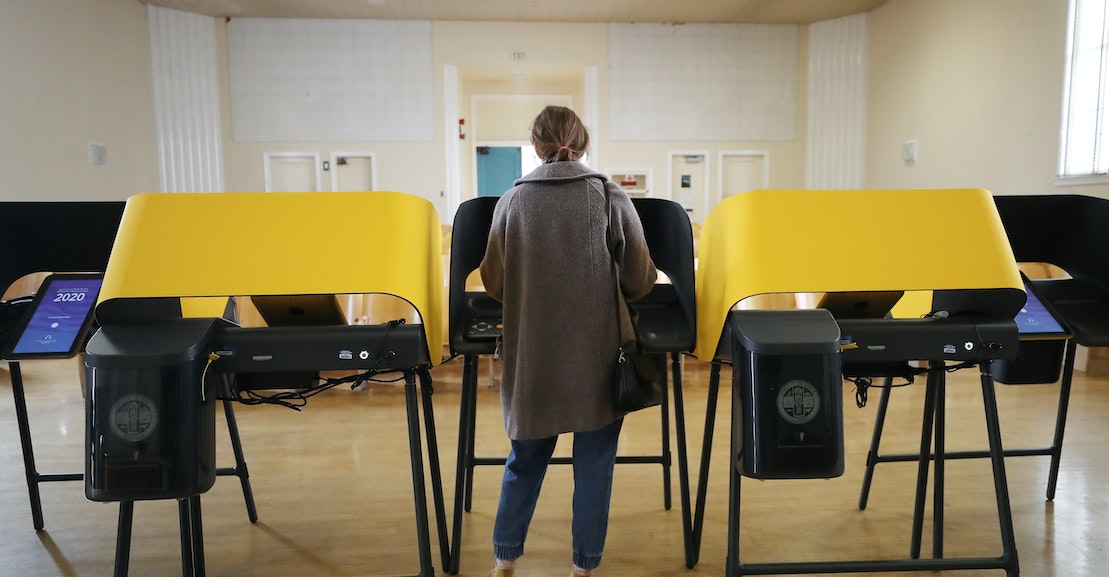 Voter intimidation is not always easy to identify or to document, something voting rights advocates have emphasized this year. “It is often subtle or context-dependent,” as a fact sheet from Georgetown University’s Institute for Constitutional Advocacy and Protection advises. It’s also shaped by the kinds of intimidation voters might already experience outside the polling place. Have they been able to get a form of legal identification that satisfies the voter ID requirements in 35 states, without being challenged based on the name or gender markers on their other identification? What could happen when a polling place worker reads the name on that ID out loud, in front of the other people in line? If you thought you might face harm as a result, would you risk going to the polls? “Trans people don’t know if that polling place is going to be safe,” said Kit Malone, an advocate with the American Civil Liberties Union Indiana. “We don’t know if any place is going to be safe.”

In addition to the other barriers people are up against voting this year—Covid-19, confusing restrictions on absentee and mail-in voting—trans people can’t trust that they’ll be able to vote and not also be outed or harassed. “Poll workers themselves might not be educated,” Malone, who works on voting rights for trans people, told me by phone. “You may hand over an ID … but you haven’t had the money or the resources to update that ID, and you may find—and we have heard stories—poll workers may loudly announce that your ID doesn’t match what you look like, and they may say insulting things, calling you ‘it’ to other poll workers.” Compounding that intimidation? There could be other voters watching and hearing this: “People who may know you, people who may already be biased against you, using that opportunity to intimidate you when you are out in public.”

As of the 2020 election, there are more than an estimated 375,000 trans people who are eligible to vote in states where elections are not conducted entirely by mail and who do not have IDs that show either their correct name or gender marker or both, according to an analysis by the Williams Institute. That’s around 42 percent of eligible trans voters in those states who may face this kind of intimidation at the polls. At the same time, around 260,000 trans voters live in a voter ID state, where they could be disenfranchised for lacking proper identification.

Voting in a state even without such laws doesn’t mean trans and nonbinary people won’t be challenged at the polls. Precinct officials have demanded ID in those states, as one did in 2019 in North Carolina, telling a trans woman who was trying to vote she had to show him her ID “because your face does not match your name.” She asked, “Is it because I’m transgender?” The voter has filed suit against that county; her attorney said that despite being treated that way, “she’s determined to vote.” And she’s not alone: A trans woman in Vermont, Sade Viscaria, was turned away from her polling place in 2018. She said a poll worker accused her of having a fake ID and not being a woman. An advocate went with her to another polling place, where she was able to vote. It was the first governor’s race with a trans person running as a major-party candidate. In the last presidential election, a poll worker in Allegheny County, Pennsylvania, reportedly told a trans woman she couldn’t vote unless she could show her legal name-change documentation. Jesse Rise went home and returned to the polling place with her ID. She told the local paper that poll workers asked her boyfriend, a trans man, for photo ID, as well—none of this is required in the state.

In light of this pattern of trans voter disenfranchisement, and the escalating attacks on voting rights generally, for trans and nonbinary people, “this election is feeling more complicated and more burdensome than ever,” said Arli Christian, a campaign strategist at the national ACLU. Some states have removed more strict requirements for acquiring a legal name change and updated identity documents: In 19 states and the District of Columbia, Christian told me by phone, people seeking to change their gender identity marker can do so by self-attestation—declaring it themselves. Gender-neutral markers are now available on IDs in 19 states and D.C., as well. At the same time, there’s been a “progression of stricter voter ID laws,” Christian said. The two sets of laws are “clashing with one another.” Still, though, “gender presentation is not a valid reason to turn someone away at the polls.”