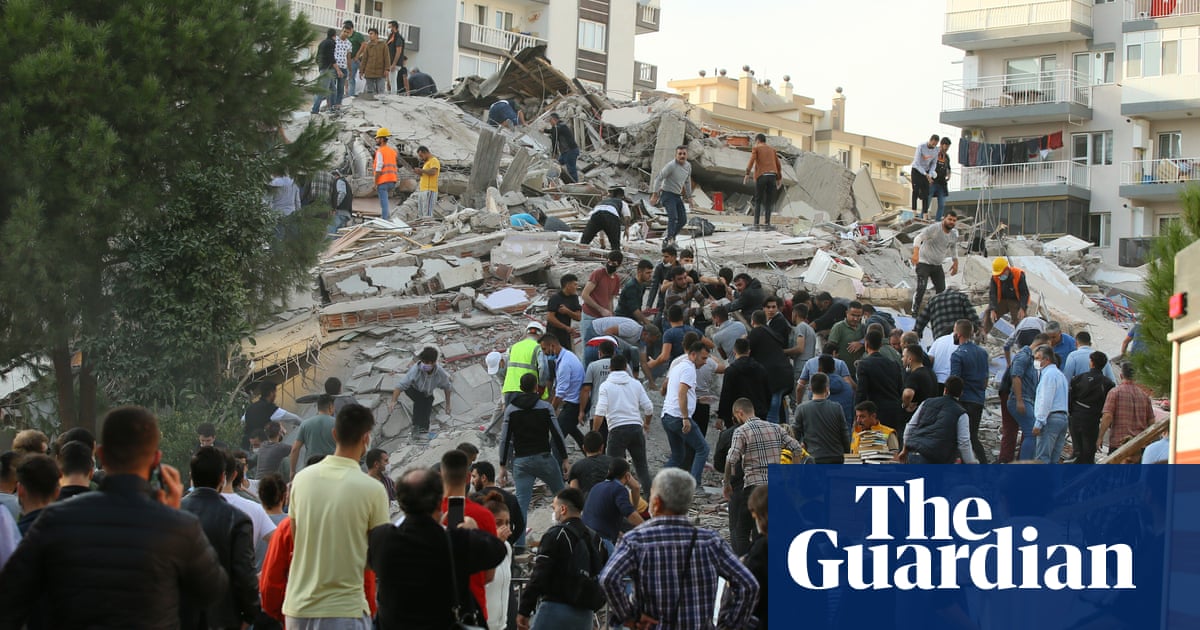 At least six people have been killed and 202 injured after a powerful earthquake in the Aegean Sea toppled buildings in the Turkish city of İzmir and created sea surges on Greek islands. .

Turkey’s disaster management authority said six people had died when the quake, measuring about 7.0 in magnitude, struck at 14.51pm local time on Friday. One of the dead had drowned, the authority said.

The number of dead is expected to rise, with the mayor of Izmir telling the television channel CNN Turk that at least 20 buildings had collapsed in the city, which is home to 4.5 million people.

The epicentre was about 11 miles (17 km) off İzmir province and eight miles northeast of the Greek island of Samos, at a relatively shallow depth of about 10 miles.

Turkey’s disaster and emergency management agency put the magnitude lower than the US Geological Survey, at 6.6, while the European-Mediterranean Seismological Centre said the quake had a preliminary magnitude of 6.9.

Significant damage has also been reported in the cities of Bornova and Bayraklı, the Turkish interior minister, Süleiman Soylu, tweeted.

Greek media reported rockfalls and some damage on the island of Samos, which is home to 45,000 people and where buildings are mostly lowrise. Local residents have been urged to stay away from coastal areas in case of a tidal wave or further tremors, Efthymios Lekkas, the head of Greece’s organisation for antiseismic planning, told Skai TV. Eight people have suffered light injuries on Samos, officials said.

Dramatic footage broadcast by Turkish television and shared on social media appeared to show flooding and sea water receeding in the Turkish coastal city of Seferihisar and Greece’s Samos and Chios, which Seferihisar mayor described as a “small tsunami”.

Cars and household contents such as refrigerators, chairs and tables were dragged through Seferihisar’s streets by fast-moving water.

Mazlum Vesek, a reporter for local newspaper Ege Telgraf in Izmir, told the Guardian that he had visited a hospital emergency room and counted scores of wounded people.

Vesek said he was walking down the street when the quake struck and “the ground flipped under my feet like a rug,” sharing photographs and video of people screaming and trying to dig out survivors from one of the city’s collapsed apartment blocks .

“There are no numbers for deaths and casualties yet but the hope of not having any is really low looking at the buildings collapsed here in [worst hit neighbourhood] Manavkuyu, he said.

“People are all out on the streets because they don’t want to go inside.”

The Turkish president, Recep Tayyip Erdoğan, said “all of our state’s capabilities” had been dispatched to help those affected by the earthquake. Search and rescue operations are now underway across Izmir province, the governor said, with medical helicopters and more than 100 personnel from the rest of the country on their way.

Local residents used chainsaws to cut through the wreckage of collapsed buildings while shouting for onlookers to be quiet so they could hear people trapped inside. At least one woman appears to have been rescued alive from the rubble so far.

The foreign ministers of Turkey and Greece have spoken by phone and are ready to help one another, Ankara said, despite skyrocketing tensions between the two countries over hydrocarbon exploration in the eastern Mediterranean.

Some shaking was also felt in both Istanbul, Turkey’s largest city, some 500km away, and Athens, the capital of Greece, although no damage was reported in either city, and as far away as Bulgaria.

Turkey, which encompasses several active fault lines, is no stranger to deadly earthquakes. The most devastating in recent history was a 7.4-magnitude quake, which hit the western Marmara region in 1999, leaving more than 17,000 dead.