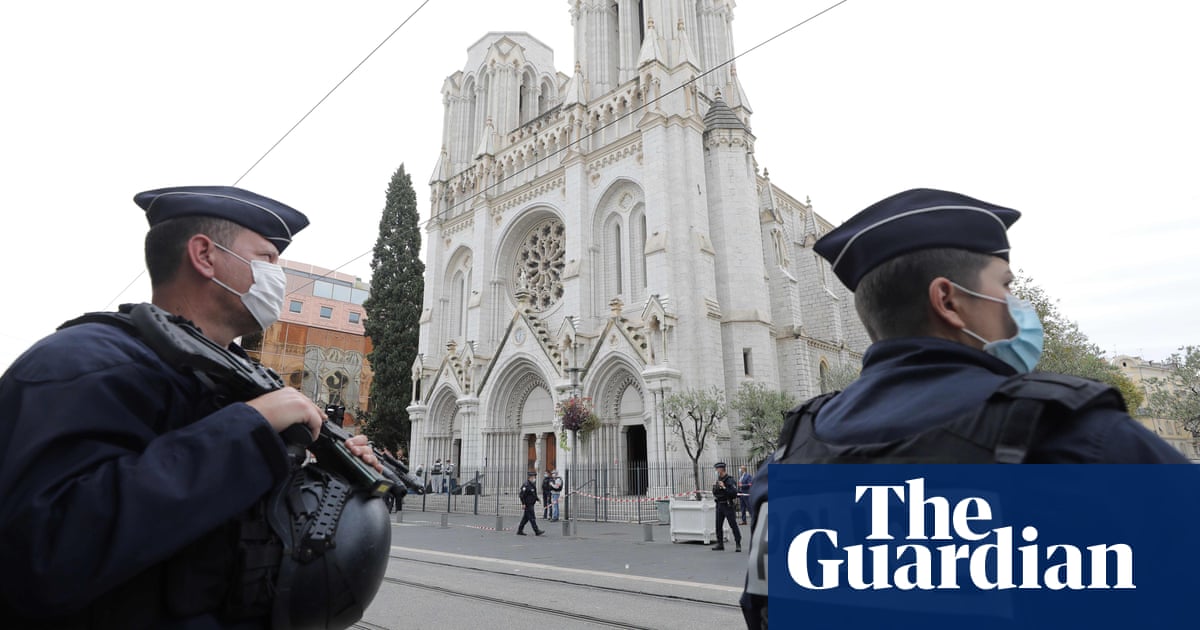 Police in Nice are questioning a 47-year-old man who is reported to have been in contact with the suspected basilica knifeman hours before the attack that left three people dead.

The man was taken into custody late on Thursday evening. Police have given no more details and say there is currently no evidence that the knifeman had an accomplice. The suspected attacker, 21-year-old Tunisian man Brahim Aouissaoui, was shot by police and is in a serious condition in hospital in Nice.

On Friday, the first day of France’s new Covid-19 lockdown, Emmanuel Macron held an emergency defence council meeting. Macron announced on Thursday that France’s security threat alert had been raised to the highest level and an extra 4,000 soldiers were being deployed across the country as part of Operation Sentinelle, bringing the total number of troops mobilised in France to 7,000.

‘Tell my children I love them’: the victims of the Nice attack

Local police officers have been praised for their quick response in confronting the attacker. The incident lasted 28 minutes and officers afterwards described the scene as a “vision of horror”.

Richard Gianotti, the Nice municipal police chief, said six of his officers were inside the basilica “quasi instantly” after the alarm was raised. A police patrol was passing the basilica at the time and was approached by a person who had come out of the building saying someone had been “seriously stabbed”, Gianotti said.

The patrol was quickly joined by reinforcements. One team went in through the main entrance and a second entered via the sacristy door. “Those that went in the main entrance saw the 60-year-old woman who was stabbed on the ground. Those who went into the sacristy came immediately across the man who was holding a knife,” Gianotti told BFMTV. “He had just killed three people, he was shouting ‘Allahu Akbar’. One officer shot but missed him. It was done in legitimate defence.

“The corridor was quite narrow and he [the attacker] continued to advance. He was quite determined. A second police officer shot at him and brought him down, neutralised him.”

Gianotti said two officers used their guns, and they fired around 10 times. “He [the attacker] was neutralised on the ground. The only words he pronounced were ‘Allahu Akbar’.”

The police chief said his officers had no idea at that point whether the attacker was wearing a suicide vest or had an accomplice. “We checked him on the ground, he was not wearing a vest. Rapidly a second municipal police team arrived with a national police team. It’s hard to imagine but it happened very quickly, in three or four minutes.”

Macron was among those who acknowledged the bravery of the police.

Gianotti said: “When they entered [the basilica] they were going into the unknown. They took measure of the situation and the legal framework of such an intervention … it was a situation of legitimate defence, and they knew they could fire their weapons. They saved lives by being at the scene quasi instantly.”

He said Nice police were well equipped with bulletproof vests, the means to fire rubber bullets, and semi-automatic 9mm Glock pistols with 15 bullets.