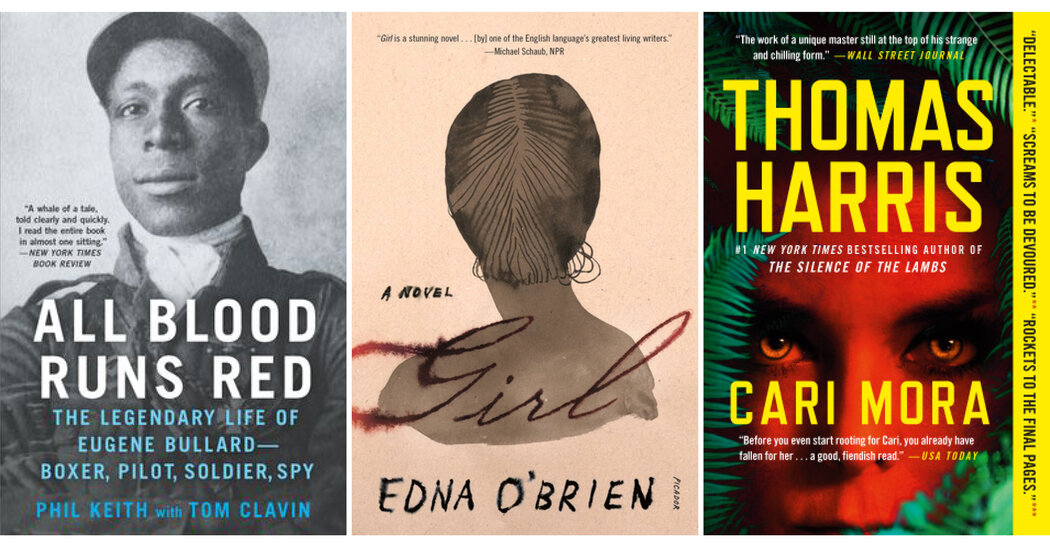 ALL BLOOD RUNS RED: The Legendary Life of Eugene Bullard — Boxer, Pilot, Soldier, Spy, by Phil Keith with Tom Clavin. (Hanover Square, 352 pp., $17.99.) This “absorbing” biography of the first Black American fighter pilot “reads like a picaresque novel,” our reviewer, Thomas E. Ricks, noted. Bullard fled the Jim Crow South as a boy by stowing away on a freighter to Europe, where he fought for the French Foreign Legion and ran a Paris nightclub, among other exploits.

GIRL, by Edna O’Brien. (Picador, 240 pp., $17.) Our reviewer, Francine Prose, praised both “the grit” that inspired the Irish O’Brien, “a woman in her 80s, to travel to Nigeria to listen to people’s stories” before writing this novel in the voice of a schoolgirl kidnapped by Boko Haram and “the skill with which she makes us care.”

CARI MORA, by Thomas Harris. (Grand Central, 320 pp., $16.99.) The title character in this thriller by Harris (“The Silence of the Lambs”) — a Colombian refugee and former child soldier living in Miami and caretaking a mansion once owned by Pablo Escobar — “proves a woman to chew on,” our reviewer, Vanessa Friedman, quipped. “Metaphorically speaking, of course.”

ATTICUS FINCH: The Biography: Harper Lee, Her Father, and the Making of an American Icon, by Joseph Crespino. (Basic, 272 pp., $17.99.) This “illuminating” study of the “virtuous” lawyer in “To Kill a Mockingbird” and his real-life model, Lee’s “genteel white supremicist” father, our reviewer, Howell Raines, wrote, concludes that both Harper and A. C. Lee “wanted the world to have a better opinion of upper-class Southern WASPs than they deserve.”

THE CANCER JOURNALS, by Audre Lorde. (Penguin Classics, 96 pp., $14.) Reissued with a foreword by the Pulitzer Prize-winning poet Tracy K. Smith, this mix of journal entries, poetry and prose — which the Times critic Parul Sehgal referred to as a “genre-defining” work — records the first stage of Lorde’s 14-year battle with breast cancer, from her diagnosis through her feminist denouncement of post-mastectomy prostheses.

FRANKISSSTEIN: A Love Story, by Jeanette Winterson. (Grove, 384 pp., $17.) “Far, far more than a reimagining of Mary Shelley’s 19th-century monsterpiece,” according to our reviewer, Sarah Lotz, this “fearless” novel “toys with timelines,” “veers from the Gothic to the satirical” and “seamlessly interweaves” commentary on everything from gender to social media and future tech.