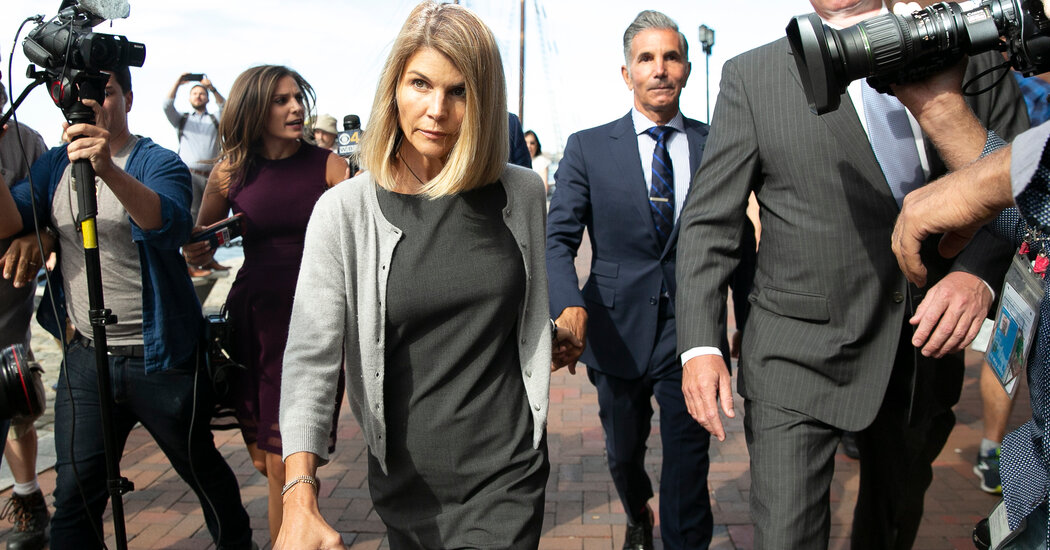 The actress Lori Loughlin reported to federal prison on Friday, five months after she and her husband pleaded guilty to charges that they conspired to have their two daughters admitted to the University of Southern California as rowing recruits, even though neither participated in the sport.

Ms. Loughlin, 56, reported to the federal prison in Dublin, Calif., to begin a two-month sentence, according to prosecutors, who said Ms. Loughlin had agreed that she would not seek early release because of the coronavirus pandemic. She had initially been scheduled to report to prison on Nov. 19, but prosecutors said they had reached an agreement to allow her to begin her sentence early.

The actress Felicity Huffman, who admitted in May to paying $15,000 to arrange for a proctor to illicitly correct her daughter’s SAT responses, served 11 days at the same prison, 35 miles east of San Francisco, which houses more than 870 female inmates.

Ms. Loughlin has also been sentenced to two years of supervised release, during which time she must complete 100 hours of community service and pay a $150,000 fine, prosecutors said.

Ms. Loughlin and Ms. Huffman were among the highest-profile defendants in the nationwide admissions prosecution, in which financiers, lawyers and celebrities were charged with conspiring to cheat on exams or bribe coaches, showing the lengths to which some wealthy parents go to get their children into prestigious colleges.

More than 50 people have been charged in the sprawling case, which was orchestrated, prosecutors said, by William Singer, a Newport Beach, Calif., businessman who has been cooperating with federal investigators since September 2018.

Ms. Loughlin, best known for playing Aunt Becky on the 1990s sitcom “Full House,” and her husband, Mossimo Giannulli, 57, a fashion designer, became the 23rd and 24th parents to plead guilty in the case in May. Prosecutors said the couple had paid $500,000 to have their children admitted to U.S.C.

Unlike Ms. Huffman, who released a lengthy, emotional statement expressing shame about her actions and apologizing to hard-working students and their parents, Ms. Loughlin did not make any public statements when she entered her guilty plea via Zoom.

But at her sentencing in August, Ms. Loughlin tearfully apologized. She said she had believed that she was acting out of love for her children but she realized she had only undermined them, as well as contributed to inequities in society.

“That realization weighs heavily on me,” Ms. Loughlin said, “and while I wish I could go back and do things differently, I can only take responsibility and move forward.”

Mr. Giannulli is expected to report to prison for a five-month sentence on Nov. 19, according to prosecutors. He has also been sentenced to two years of supervised release, during which time he must complete 250 hours of community service and pay a $250,000 fine.

One of the prosecutors, Eric S. Rosen of the U.S. Attorney’s Office for the District of Massachusetts, said in May that Ms. Loughlin and Mr. Giannulli had known that Mr. Singer was falsely presenting both of their daughters to U.S.C. as experienced coxswains, and that they had both taken pains to keep staff members at the girls’ high school in the dark.

After their younger daughter was provisionally admitted to U.S.C. as an athletic recruit, Mr. Singer told the couple to keep it “hush-hush,” Mr. Rosen said. Ms. Loughlin sent her younger daughter a text, the prosecutor said, warning her that telling her high school counselor that U.S.C. was her top choice might be “a flag for the weasel to meddle” and not to “say too much to that man.”