Liam Wright likes to put himself in other people’s position when thinking about different political issues. But when it comes to Marcus Rashford’s campaign to extend free school meals into the school holidays, he doesn’t need to. “I come from a sort of similar background. We saw struggles, and we had to pay for school meals and things like that when we were growing up.”

Wright, owner of the Homemade Deli in Middlesbrough, immediately wanted to offer help hungry children in his area after he heard that a motion to provide 1.4 million disadvantaged children in England with £15-a-week food vouchers during half-terms and holidays until Easter 2021 was voted down by the government last week. The small business had supported around 40 families by Thursday.

“I’m quite successful now, so I just like to give a little bit back to help the people who were in a similar position to myself,” Wright said. 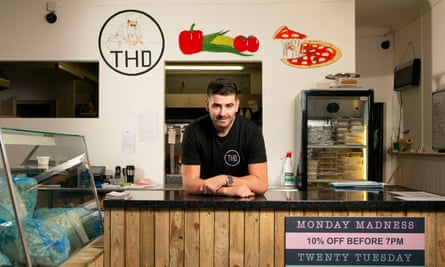 He isn’t alone. More than 2,000 businesses from every corner of the UK responded to the appeal by Rashford – the footballer and campaigner who became an MBE this month and turns 23 on Saturday/today – and announced they would be stepping in to provide a free lunch meal to children in their local area over this week’s half-term, according to an interactive map by the volunteer group All Of Us Together.

Stephen Way, of All Of Us Together, said at least 20,026 meals were provided by 411 organisations in the first few days of the week. The data is preliminary, and he urged organisations to fill in their online form “so we can help authorities understand the needs in our communities”.

Alice Bane, co-owner of the ReFill Store in Cornwall, said she joined the campaign out of kindness and as a rebuke to the government’s decision-making. “It really did make us angry what the government decided to do. We’re quite a small community down here in Cornwall, and so we just wanted to do what we could to support the local people.”

The store was able to raise £1,500 to deliver more than 60 packed lunches. As well as donating money, people in the local community provided produce and offered to deliver the packages to those who needed it. “It’s been hugely encouraging and good to see the best of humanity,” Bane said.

The team was also able to gain insight into the difficult circumstances that some families are going through: one woman thanked the cafe and told them she didn’t know how else she’d have been able to feed her three children during the school holiday. “It is absolutely heartbreaking, and we’ve cried,” Bane said.

In Liverpool, Shino, who runs Shino’s Coffee Lounge, has been providing warm meals such as nuggets and fish fingers this week. “I’m happy to see them happy as well, especially the kids. It’s been really nice.”

He couldn’t believe it when he heard the government wouldn’t be extending free school meals despite the economic fallout from the coronavirus pandemic, and urged ministers to visit communities like his to see the need.

Though the decision on free school meals only affects England, businesses in Scotland, Wales, and Northern Ireland have also joined Rashford’s campaign.

Pauline Fitzsimons of the Now Group, which runs Loaf Catering and Cafes in Belfast, a social enterprise working with people with learning difficulties and autism, said the pandemic has greatly increased the need for support in the community. The cafe has provided more than 300 packed lunches this week.

“There’s a lot of families that are actually probably not on free school meals traditionally but at this moment in time find themselves in a situation of having to go to places like food banks, and they would never have gone to that before,” Fitzsimons said.

In the Welsh port of Holyhead, the well loved local chip shop, Chippy Chippy, has been overwhelmed with requests to help after they announced they would be providing free meals to children in need.

Lora Jones, a partners at Chippy Chippy, said they initially planned to provide sausages, fish fingers and beans. “And a guy turned up with like a massive carrier bag full of beans and then a lady asked if she could bring a sweet treat down. People started donating cake bars, smoothies, and apples,” Jones said.

She then started to worry about the number of parents who would go hungry and decided to provide adult meals as well. Staff had driven across Holy Island, at times making hour-long trips, to ensure families were fed.

It’s not just been businesses who have backed Rashford’s campaign. Ben Fisher, the chairman of Middlesbrough Women FC, is proud of how many different organisations in the community have responded. The issue of free school meals is felt deeply here; the area saw the biggest increase in child poverty, according to a report published earlier this month.

With the food donated by fans, Fisher has been able to deliver 100 food parcels. “It’s hard to see first-hand how people are struggling and people do need help,” he said. “It shouldn’t be happening and there’s no hiding from the fact it is helping.”

On Tuesday, a mum of five phoned the Homemade Deli to ask what the cheapest thing on the menu was and see whether she qualified for free school meals. Wright told her to come down and he’d give the children pizza or pasta dishes of their choice.

“When she came in you could see she was really struggling to get by. I think one of the little girls had her mum’s coat on,” Wright said. As well as the meal, the staff collected donations among themselves and will send the woman a hamper to support the family.

He called for ministers to put themselves in these families’ position. “If they didn’t have money, and their children went to school and they got free school meals, and then somebody took that away from them and they couldn’t afford to pay … I think they would think about things twice,” Wright said.