England are in line for a much-needed windfall of around £5m if they clinch a third Six Nations title under Eddie Jones on Saturday. A bumper bonus-point win against Italy would put England in the box-seat before France host Ireland in the evening kick-off and would deliver a welcome financial boost for the Rugby Football Union if Jones’s side end up as champions.

The decision to cancel last week’s match against the Barbarians is set to cost the RFU up to £1m in lost TV money and sponsorship, and the union laid bare the financial strife caused by the pandemic in its annual report on Friday, which showed an operating loss of £10.8m recorded for the last financial year.

It is understood, however, that despite disruption caused by the pandemic, the division of TV and sponsorship earnings according to finishing position in the Six Nations table has not changed. Jones’s side begin the day as odds-on favourites to clinch the title and a bonus-point win by a sizeable margin will almost certainly see England crowned champions.

To demonstrate how much has changed since England last played nearly eight months ago, they will run out at an empty Stadio Olimpico, barring the 400 or so people working at the venue. The players will be obliged to stand at least one metre apart for the socially distanced national anthems, before which they will be given the opportunity to make an anti-racism gesture. The England squad have been given the personal choice as to whether they wish to take a knee or mark the moment in some other way.

History suggests England should keep their part of the bargain – in their two previous visits to Rome under Jones they have won by a margin of 31 points, which would leave Ireland needing to beat France by more than a score or Les Bleus having to thrash Andy Farrell’s side. England have not been helped by the Barbarians fiasco, however, and would do well to remember that in their final World Cup warm-fixture at home to Italy last year, they led at half-time just 9-0.

The dangeris that having spent all week inside their Teddington bubble – not allowed to leave the hotel – they seek top gear from the first whistle, rather than attempt to move through them. Ireland scored four tries in the final 19 minutes against Italy last week and, patience will be the fundamental virtue for Jones’s side as they seek to put a “smile on people’s faces” back home. 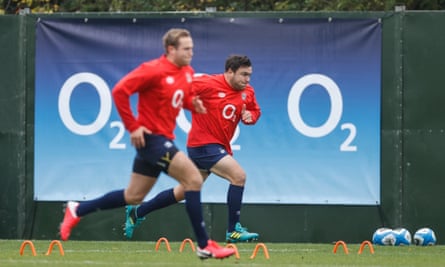 “We have been waiting for this opportunity for a long time. It would mean the world to us to win it,” said Jamie George, who admitted he was “gutted” that his family would not be in attendance to see him win his 50th cap. “We are fully aware of all the repercussions and how we need to go about it, and what our mindset needs to be going into the game. For us, mostly, it has been amazing to be back together, more than anything. We know everyone is going through a very difficult time at the minute, so we feel very privileged to be able to do that and we want to show how happy we are and how privileged we are to be in this position. Hopefully we can do that by lifting the title. We need to be very confrontational and physical at the start of the game and I think that’s when English rugby’s at its best, and when this team’s at its best. Hopefully points will come off the back of that.”

Billy Vunipola, who makes his first appearance for England since the World Cup final having missed the start of the Six Nations, echoed those sentiments. “The biggest inspiration we can provide for the country is giving them something to smile about with a trophy,” he said. “Everyone smiles with a trophy. Hopefully we can do that but we need to start with a platform that shows we’re serious about it and we’re not just going to go there and play offloading rugby from the off. It might come later on but we have to lay the foundations to start with.”

Vunipola is not expecting to take a knee before kick-off, having previously explained why doing so before Saracens’ Premiership matches was at odds with his religious beliefs. He did, however, explain that the England squad have had a number of discussions over how to take an anti-racism stance and that the final decision will be up to the individual. “We talked about it the first week we got in and we broached the matter before we were going to play the Barbarians,” Vunipola said. “Like anything in life, it’s a personal choice and the leaders made that clear.”