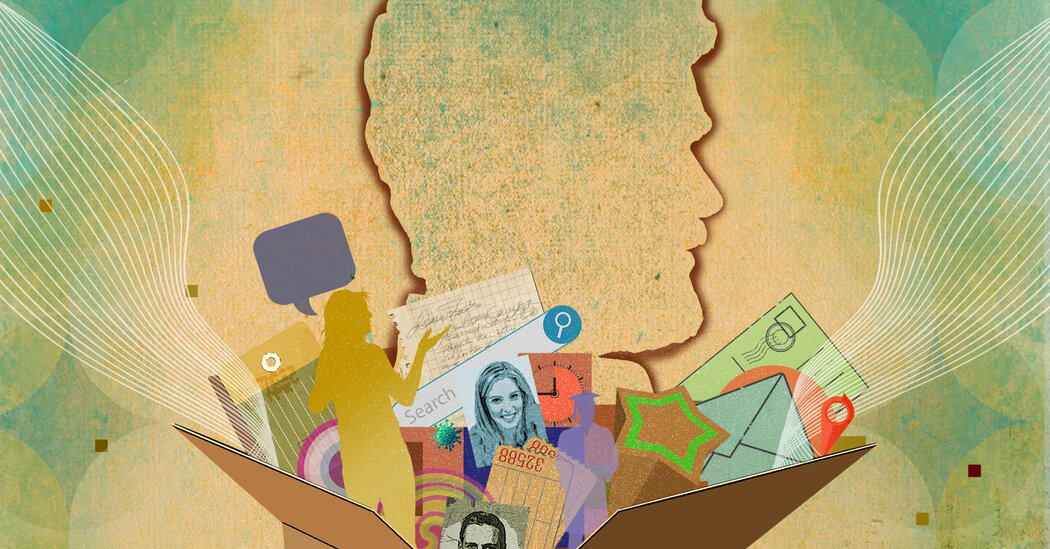 The huge cardboard box had been in my mother’s basement for decades until she said, “When are you going to move that crap to your house?”

The box sat in my basement for a few more decades, until my wife said, “When are you going to clean out that crap?”

Such language, but I got the message.

So while I have been trapped at home, I have joined the huddling masses that have decided to try to declutter, starting with my overflowing basement, with plans to tackle my closet next. Throwing stuff out is so liberating. Ancient computer parts, old shoes, cameras, things I clung to for seemingly no reason are now out the door.

But I didn’t have the emotional heft to tackle the dreaded box, about the size of a window air-conditioning unit, because I knew what was inside.

A few weeks ago, I finally lugged the box up to my office to start weeding it out. During Google video meetings, while my co-workers have tasteful books and art in the background, I have an old box. They are too nice to visibly wrinkle their noses.

Inside the box is a record of my past: mementos from high school, from my service in the U.S. Navy and from college. There are term papers (trash), hall passes (oddly, keep), clippings from my track meets (keep, my high school team actually played against Bruce Jenner’s) and 50-year-old Marvel comic books (keep and cash in some day). From the Navy, in which I served on the U.S.S. Sacramento in the South China Sea off Vietnam, I had plans of the day (keep one), Navy magazines (trash), photos (keep) and a performance evaluation (keep the good one).

I don’t know why I saved all of this stuff, but in 2020 it has become a wonderful time capsule.

There are hundreds of letters from friends who wrote to me while I was overseas — Lydia, Nancy, John, Pat, another Pat, Ray, Marilyn, Walter, Trish. And Susan, the high school girlfriend I almost married.

Reading the letters, I rediscovered these forgotten friendships, remembered my teenage angst and the loneliness of a sailor far from home. As I read, I realized that I suddenly longed to find these people from half a century ago and see how their lives turned out. Maybe this feeling came from the pandemic. All of us are at least in our 60s and vulnerable to the virus. I didn’t want to wait another five decades.

So I searched their names on Google. I found several obituaries, nonworking phone numbers and, yikes, a police report or two. I had no luck finding people at first, but when I finally did, it opened doors to others. Pretty soon, I was calling everybody. Am I the only person whose social life has improved during the lockdown?

I started having “Do you remember me?” phone calls and catching up on lives. I learned about grandchildren, deaths, many divorces, successful careers and major surgeries. It was as if I had started reading a book at 18 and finished it 50 years later.

I found captain’s mast punishment papers (Report and Disposition of Offenses) for Mario, a Vietnam buddy who had violated Article 86, unauthorized absence. Twice. “I had forgotten what a troublemaker you were,” I said, laughing, when I reached him. He married a nurse, who changes her clothes in the garage when she comes home from work because of Covid-19. They have two children, neither a troublemaker.

I caught up with Chuck, the highly educated Navy pal who badgered me into going to college after my discharge. My debt to him is enormous. I tried to reach our former lieutenant, Alex, but he never picked up.

Trish and Walt’s letter in 1972 was about their upcoming wedding. “The bridesmaids’ gowns are going to be brown and white, so you guys will be wearing brown tuxes,” she wrote. They divorced a few years later. I found her through her mother’s obit, sadly, and Trish told me she had remarried, but divorced after 30 years and four children.

There was a letter from my mother, although it could have been from any of our mothers, written just 24 hours after I left for boot camp in 1970. She bizarrely wondered why she had not received a letter from me and asked me to call, writing down our phone number as if this teenager who had lived on the phone had actually forgotten it.

My departure was also her chance to declutter, but she found straightening my room too sad. “I have tried to clean out your clothes,” she wrote, “but find it extremely difficult. You will be happy to know that the dirt you accumulated, that I could not wait to clean up, is still there.” As I read the letter now as a parent, the pain over her youngest leaving home breaks my heart.

I found tons of letters from Susan. She had been impossible to locate until I found Ray’s letter, in which he offered to pick me up at the airport when I came home on leave in 1971. I got home some other way, but considering that he ended up as her boyfriend for a while, I wonder what he would have wanted to talk about had I taken his ride. He still lives in my hometown and was easy to find. Not surprisingly, he had Susan’s phone number.

She was shocked to hear from me (“OMG! Jim?”). She had promised to wait for me during my four-year enlistment, but smartly bailed. She went from “My ideas on what I want after high school may have changed, but not my love for you,” in one of her first letters, to “I have lost the love and respect I once held for you” exactly a year later. (“My mother helped me write that,” she told me, sounding apologetic, when I called her.)

Then she spoke the words every dumped guy wants to hear: “I never should have broken up with you.”

So much soap opera. You can’t dig through the past without tears. Mine came when I found the letter from John. He and I were such good friends in high school that, with the Vietnam War still raging, he crazily joined the Navy with me on the buddy system. We went through boot camp together, and I still have the photo of us in dress whites when we graduated.

His letter was full of plans for the future. He was a wonderful writer, and the Navy was considering sending him to journalism school. “Take it easy, ace,” he wrote, signing off. “Things will get better.”

His wife was pregnant with a girl the last time I saw him in the 1970s. He never did go to that school. And life doesn’t seem to have gotten better for John. He and his wife divorced, and I have been told that he has had serious health issues. John is totally unreachable, but I thrillingly found his daughter on LinkedIn.

I considered reaching out to her to help me find her dad, but hesitated. I had choked up as I read John’s letter, and I suspected she would, too. Would she want a glimpse of her dad as a hopeful young man or would it knock her down as it did me? “Who are you again, and why are you making me cry?” I can hear her asking.

The past is tricky and can be fat with regrets. I didn’t marry Susan, but I did marry my sweetheart. I became the journalist that John didn’t. Both of our daughters are on the West Coast. I wish I could share that with him.

But with the present so deadly and the future uncertain, I decided to let John remain unfound, and put his letter back in the box.

It’s still not empty and may never be. It will head back to the basement, where my other decluttering will make me feel less guilty about holding onto it.

James Schembari is a senior staff editor for the Times based in New York.