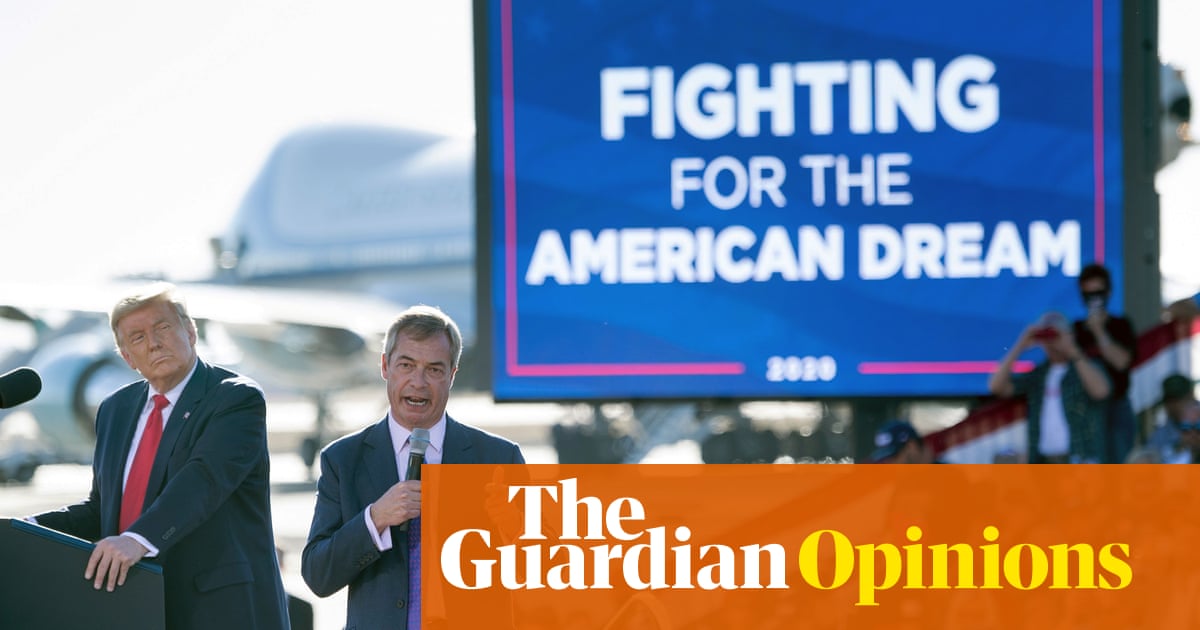 How poignant to see KentgaragisteNigel Farage interfering in the US election, much in the way a drop interferes in the ocean. Farage is appearing at the odd rally for his emotional support president, Donald Trump, which tells its own story about where the US leader is at, psychologically speaking, for the final days of his campaign. On Wednesday, Trump gibbered to a crowd: “I’m glad I called him up.” So is Nigel’s agent.

Nigel was brought on stage in Arizona by Donald, where the latter introduced him as “the king of Europe”. In fairness, he could just as easily have got away with passing Farage off as the duke of Ruritania or the sultan of Jupiter. Still, in for a penny, in for a pound, and Trump went on to hazard that Farage was “one of the most powerful men in Europe”, even though Nigel’s an unemployed radio DJ and has spent a good part of the past four years hanging round the old US-of-A hoping to get a 40-minute 6pm “dinner” invitationto eat a well-done steak with a self-confessed sex offender.

By way of recompense, Farage rubed his way on to the rally platform and took the microphone to declare Trump was “the single most resilient and bravest person I have ever met in my life”. That is probably the only truthful thing to have been said on stage that night. Yes, Trump received five draft deferments – first for college, then for something called “heel spurs” – and once described the business of avoiding STDs in Manhattan during the 1980s as “my personal Vietnam”. But you have to remember that Nigel is himself a wildly overemotional nervous Nellie who would have been interned for spreading panic during the second world war he self-owningly fetishes. There is no one more histrionic, more whiny, and – let’s face it – more willing to make alliances with far-right German politicians. We simply couldn’t have risked him failing to keep calm or carry on among the general populace.

Anyway, this week, he was giving it his best Lord Haw-Haw, informing Trump’s crowd: “You’ll be voting for the only leader in the western world with the real courage to stand up to the Chinese Communist party.” Stand up to them? He pays more tax to them than he does to the US. Later, Nigel justified his media credentials by explaining to Daily Telegraph readers that Trump had “what Americans call ‘the big M’ – momentum”. Is that what Americans call momentum? We’ll have to take this latterday Alistair Cooke’s word for it, I suppose.

Then again, engaging with Farage on his own terms is like trying to debate a fart or conduct a symposium with cystitis. Though operationally pointless and redundant now, he somewhat horrifyingly endures – a vestigial tail on our body politic. It is increasingly accepted that Nigel will always be with us, like far-left antisemitism or a mutating respiratory virus.

It is probably more helpful to step back and see him for what he represents in this case, which in some ways is nothing particularly new. British politicians have always nursed a certain desperation to be noticed by Washington power.

The trouble for Boris Johnson’s government of superforecasters is that they seem not to have forecast in time that it was at least a remote possibility this Joe Biden guy could win the presidency instead of Trump. Thus, with no meaningful bonds forged at all with the current favourite, the omens for the UK should Biden prove victorious are not what you’d file under encouraging. Any appearance of Farage within a restraining order’s distance of Trump simply serves as a reminder to Biden’s Democrats of their long-held conviction that Brexit and Trump are of a piece.

Furthermore, Johnson’s government still fails to understand that there IS a special relationship, it’s just that it’s between the US and Ireland. So when Biden last month warned that the Good Friday agreement must not become “a casualty of Brexit”, there was a very urgent need for the Conservative administration to do and say precisely nothing. As so often, alas, Iain Duncan Smith failed to get the memo, or certainly to understand the words crayoned on it, and consequently could be found across the airwaves honking that Biden shouldn’t be lecturing the UK, but should be trying for “a peace deal in the US” to stop “the killing and rioting” in cities following the death of George Floyd at the hands of a police officer. Quite what power Duncan Smith thought Biden would have at that point to strike a “peace deal” is unclear, but details aren’t exactly Iain’s strong point.

Nor are they Farage’s. It was during the EU referendum campaign, you’ll recall, that Nigel lost his rag about Barack Obama “interfering”, after the US president announced that Britain would be “at the back of the queue” for a trade deal. This didn’t go down enormously well at the time, it must be said, but has regrettably increased in accuracy as we near the conclusion of the Brexit process, a full four-and-a-half years after the event and without a trade deal lined up. Unless any agreement with the US is signed by April, the legislation allowing it to speed it through Congress will have expired, meaning we will be at the back of a queue of queues. Already, our ability to strike a deal has by all accounts been hampered by the failure to put the NHS on the table, while the need to have anything at all on the table means the table is now heaving with heavily chlorinated chicken shit. Ah well. Perhaps Britain has had enough of exports.

Speaking of chickenshits, you can be sure Nigel Farage will be a million miles away from that queue and all the other queues when they come to pass. What does he care? He’s a wrecker, not a builder. Perhaps the UK will live up to a vision “the king of Europe” couldn’t even be bothered to sketch on the back of one of his fag packets – or perhaps it won’t. Perhaps our chlorinated chickens will come home to roost.

• Marina Hyde is a Guardian columnist