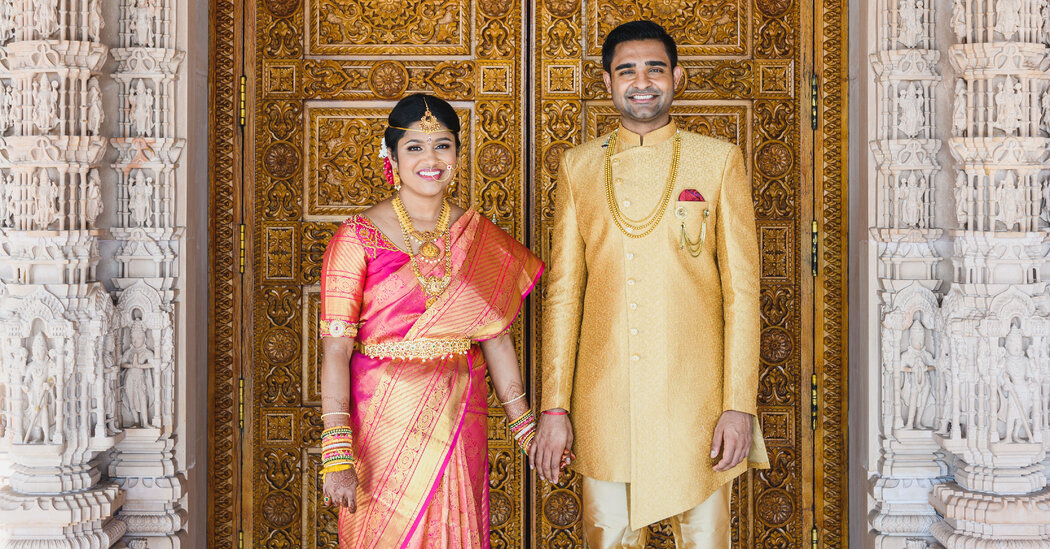 “Mohit misspelled my name, which in all fairness is a hard one,” Dr. Mullangi said. “I remember thinking, ‘Do I want to keep going with this?’”

She did. “We texted through the app for a few days. I said, ‘If you’re in New York and want to get together, let me know.’ Then he disappeared.”

“I got busy with work and I didn’t get back to her, then I felt bad about that,” he said. “I wanted to take her up on the offer and see if she was still willing to meet.”

She was. They connected a week later for brunch at Effy’s Kitchen, a cafe a block away from Dr. Mullangi’s Upper East Side her apartment. The meal turned into a six-hour date.

“He was the most interesting person I’d ever met,” she said. “Everything felt easy and familiar.”

A second date at a Thai restaurant, also in Dr. Mullangi’s neighborhood, happened the following week. After the fifth date he asked her to be his girlfriend. For the next year Mr. Agrawal traveled from Connecticut to New York on Friday night and returned home on Sunday evening.

“Commuting was a small price to pay to have a relationship I cared about,” he said. “I was seeing myself becoming a better person and growing in her company.”

In June 2019, Mr. Agrawal met Dr. Mullangi’s parents when the couple traveled to Los Angeles for the wedding of a friend of Dr. Mullangi’s. A trip to Greece for another friend’s wedding followed in July.

“On that trip we talked about what our future looked like and if we saw our future together,” she said. “We confessed we had known the other person was the one early on.”

“I purchased the ring two months earlier on Brilliantearth.com,” he said. “I watched YouTube videos for inspiration and considered an escape room but I’d set a deadline for that day, so I asked her in her apartment.”

“I was at my computer and when Mohit swiveled my chair around he was on one knee,” she said. “When his friends showed up they thought we had a fight because I was crying. I’d never cried from happiness before.”

Within the first month a wedding date was set for June. Venues were booked. Vendors were hired. And 600 invitations were sent to family and friends.

Then came the coronavirus pandemic. Mr. Agrawal took up temporary residency with Dr. Mullangi so the couple could quarantine together. Mr. Agrawal still retains his home in Connecticut. Once in-person work resumes, the couple will go back to their original commuting arrangement.

“It became clear we’d have to pick a new date,” Dr. Mullangi said. “We really wanted to get married and start our life together.”

The couple were married before 20 family members on Oct. 11, at the BAPS Shri Swaminarayan Mandir, a Hindu temple in Chino Hills, Calif. Pandit Santosh Prasad performed the ceremony. On Oct. 13, Bianca Vasquez, an employee of the San Bernardino County Assessor-Recorder-Clerk office, officiated at the legal marriage there.

“Sam makes me smile everyday,” said Mr. Agrawal. “I find happiness with her. This is the relationship I want to have with the person I want to have it with.”

“I know my life with him will always be bigger and better than what I could have accomplished alone,” Dr. Mullangi said. “He was the person I’ve been waiting for my entire life.”