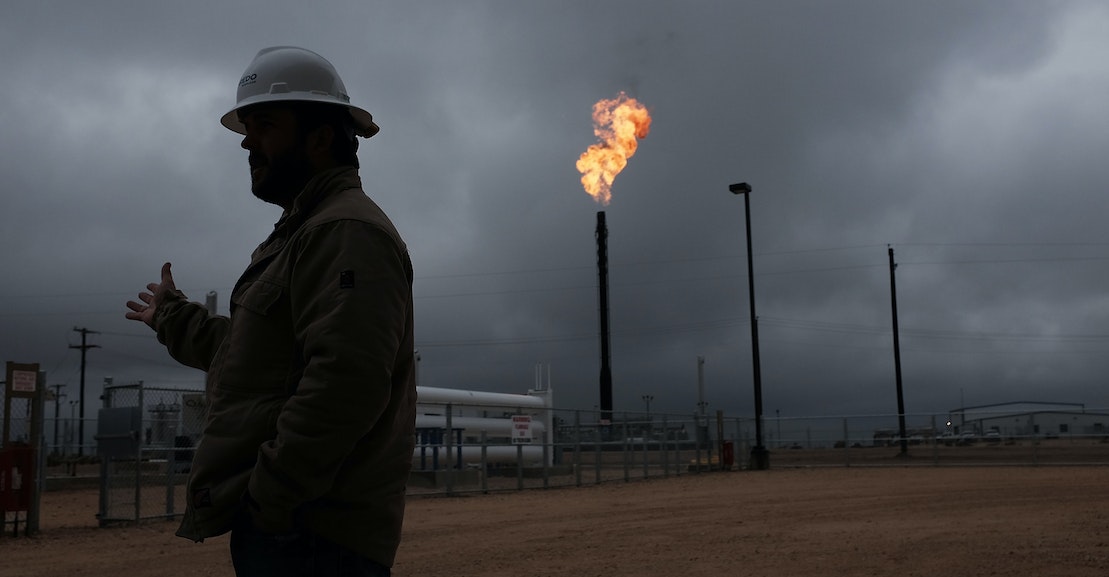 In recent weeks, Texas—long considered reliably red—has become a toss-up in the presidential race. That has interesting implications for one of the most important and under-covered climate races in the country. Engineer and lawyer Chrysta Castañeda is running for one of three seats on the GOP-controlled Texas Railroad Commission, the primary regulator for the state’s expansive oil and gas industry. Castañeda wants to restrict gas flaring, the practice by which drillers burn off fuel they can’t sell, releasing prodigious amounts of methane. If the new blue momentum holds, it could allow her to become the first Democrat to win statewide office in Texas since 1994.

Castañeda’s Republican opponent, Jim Wright, is in the oil industry. And so far, the obscurity of this race has allowed his wackier statements to escape national attention. During a podcast interview earlier this month, he wondered aloud whether climate change was just another example of the planet “evolving,” suggested—despite Texas being the top wind power producer in the nation—that he doesn’t believe real wind and solar energy are viable, and explained that he’s mostly running for the Railroad Commission (commonly abbreviated as RRC) to allow his industry to write its own rules.

Wright owns four businesses, including an oil field service company. A prior oilfield waste management company he founded and sold off but continued to be listed as president of, according to court filings—Dewitt Recyclable Products—had its main facility shut down by the RRC in 2017 for storing waste directly on the ground and in un-permitted pits, and allowing frac fluid (a chemical mixture used in drilling operations) to leech out. As the Houston Chronicle reported, the Commission held Wright responsible for $181,000 worth of violations. Wright and his attorney argued that he didn’t have operational control of the facility, though he ended up paying the fine.

“I don’t want that dude running anything—even if that means voting Democratic.”

Wright also faces an accusation of fraud from the oilfield services firm Petro Swift LLC, which alleges in a lawsuit that he engaged in “fraudulent transfers” to avoid paying Petro Swift for construction work. As a result, the head of Petro Swift has denounced him. “I always thought the Democratic side is anti-oil, anti-fracking, so let’s have a Republican on the Railroad Commission,” Petro Swift co-owner Travis McRae recently told a local Texas newspaper, the Corpus Christi Caller-Times. “In this particular case, based on personal experience, I don’t want that dude running anything—even if that means voting Democratic.”

The podcast on which Wright aired his climate skepticism was “Oil and Gas Startups,” hosted by Colin McLelland and Jake Corley. Likening regulations to the Bible, Wright told them that “there are a lot of interpretation” in regulatory language, and complained that “inexperienced” regulators—those who haven’t had extensive careers in the industry—create delays that he says have cut into “my customer base.”