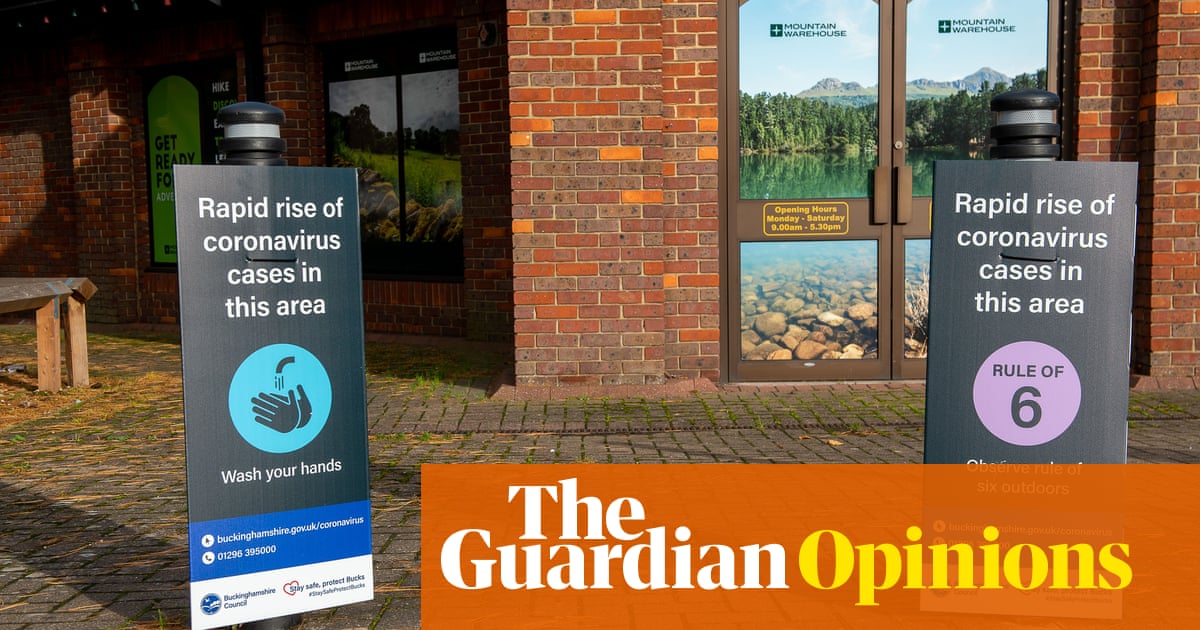 The decision not to implement a two- or three-week “circuit breaker” lockdown in October, using the school half-term to minimise the inevitable disruption, can now be added to a list of paths not taken by the UK government in its coronavirus response. As the French and German leaders have gone before their people in recent days to explain new measures to try to inhibit a rising second wave of infections, the British public have instead been subjected to a barrage of conflicting opinion and interpretation from national and local politicians, scientists, business leaders and the former supreme court justice Jonathan Sumption, who is among supporters of a new campaign set up to oppose what it describes as curbs on “essential freedoms”.

With Wales and Northern Ireland (as well as the Irish Republic) already under stricter regimes than England, and a system of five tiers operating in Scotland in contrast with England’s three, the UK seems headed in the opposite direction to our European neighbours. The French president, Emmanuel Macron, used a televised address on Wednesday to summon a “collective effort” to apply a brake to the disease’s spread during a four-week period of tough restrictions. After a video conference with Germany’s 16 state leaders, Angela Merkel announced similar measures. Challenged by rightwing critics in parliament, her apt retort was that “freedom is not every man for himself, it is responsibility – for oneself, one’s family, the workplace. It shows us we are part of a whole.”

Like the UK, both nations have their divisions. Thursday’s terrorist attack in Nice, which saw three people killed in horrifying circumstances, was a grim reminder of the many challenges facing Mr Macron. But in neither country has the policy response to the pandemic become so mired in such intensely political argument. The bitter row over Marcus Rashford’s school meals campaign, and the extent to which the government should extend financial support to poorer children, is one example. The stand-off between the mayor of Greater Manchester, Andy Burnham, and Whitehall over funding is another.

But these are just two pieces in a bigger picture. Fragmentation has set in as a national mood – along party and regional lines, but also between those who take different views on the importance of public health versus measures to protect jobs and businesses. On Thursday, the sandwich chain Pret a Manger publicly distanced itself from remarks by its founder, Julian Metcalfe, to the effect that another lockdown would be “impossible”. There is talk of Conservative backbenchers forming a new group modelled on the pro-Brexit European Research Group, to make the case for a less economically restrictive approach by government.

This column has argued before that the dichotomy is false. As the scientist, Dr David Nabarro, pointed out on Thursday, lockdown-type measures should be viewed as a last resort. Nobody is advocating a second shutdown of schools (in France and Germany they will remain open). The whole point of the test, track and trace system on which the government has so far spent £12bn was to suppress the virus so that life could go on as close to normal as possible. Yet the failures continue to mount, with reports of minimally trained call centre workers drafted into clinical casework roles the latest indication of the system’s disastrous mismanagement. A worst-case scenario drawn up by scientists describes a winter in which there are 500 deaths a day for three months. Already, the number of infections has doubled since last month, with illness spreading beyond 18- to 24-year-olds, where it had been concentrated, into older age groups. In the south of England, the R number has risen above two.

A prime minister who idolises Winston Churchill, one might have imagined, would seize the opportunity to imitate him. Yet the irony now facing the UK is that its prime minister seems less suited to steer his country through a crisis than almost anyone else. Strong action and clear communication are needed. But instead we seem at growing risk of being shipwrecked on the rocks of Boris Johnson’s libertarian instincts.