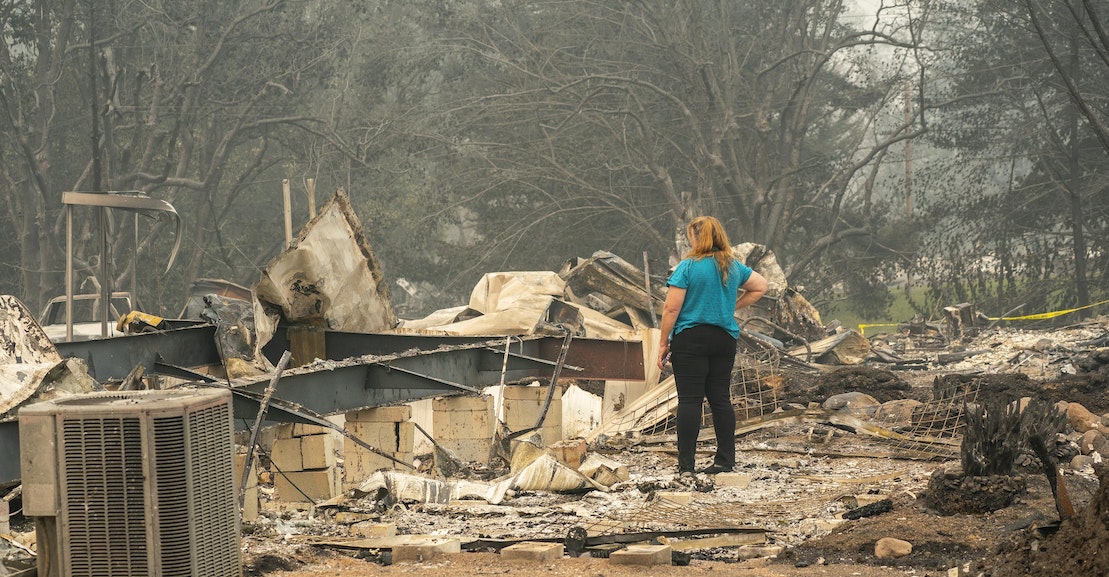 For 13 years, Erica Ramírez lived with her children in a house in Medford, Oregon, a small city in the southwestern corner of the state. It was a modest two-bedroom, painted blue with white accents. She’d saved up to purchase it after coming to the United States from Guatemala in 1993 seeking political asylum, working various jobs, often as an RV cleaner. On September 8, when the Alameda wildfire began north of Ashland and raged into the outskirts of her neighborhood, Ramírez was on a walk some 45 minutes away; she got call alerting her and began running back, panicked about her pitbull, Rosie, who was still at the house. The roads were closed and police blocked her entrance, but her son made it back. He got Rosie out and tried to use the hose to stop the flames. The house burned anyway.

“I worked for many years to get what I have, a roof, a home,” Ramírez told me. “I miss it a lot. All the memories that burned, the memories of my children, of my family, my whole family. We couldn’t rescue anything.” Ramírez is now living about a half an hour away with a friend who she used to work with and, for the moment, apart from her youngest son and seven-year-old grandchild. She is one of thousands of people who are now unhoused in the wake of the wildfires that, since August, have destroyed more than 4 million acres across California, Oregon, and Washington.

Officials in Jackson County, one of the eight Oregon counties named in the president’s major disaster declaration in response to the fires, estimate that approximately 3,000 people were displaced by the fires and around 2,357 structures were destroyed—three quarters of which were mobile homes where many elderly, Latinx, and immigrant communities lived. “Some folks are staying in parking lots and living out of their cars, even though we have the Red Cross,” said Virginia Camberos, the Rogue Valley Regional Director of Unite Oregon, an organization serving rural communities and people experiencing poverty across the state. Others are living with family or friends, in shelters, hotels, and other temporary situations—in some cases throwing “Covid out the window,” Camberos said.

And yet, despite the anguish and uncertainty, many are still thinking about the November 3 election and how to cast a ballot without a stable address. “Even though folks have lost their homes and all that, they say, How am I going to get my ballot? These are first time voters,” Camberos said. “It’s so important to them.”

Ramírez, who became a U.S. citizen last October, is one of those voters. She told me that while a lot of information is readily available about wildfire relief and voting, very little is written in Spanish. This is her first election; she’s anxious about the process.