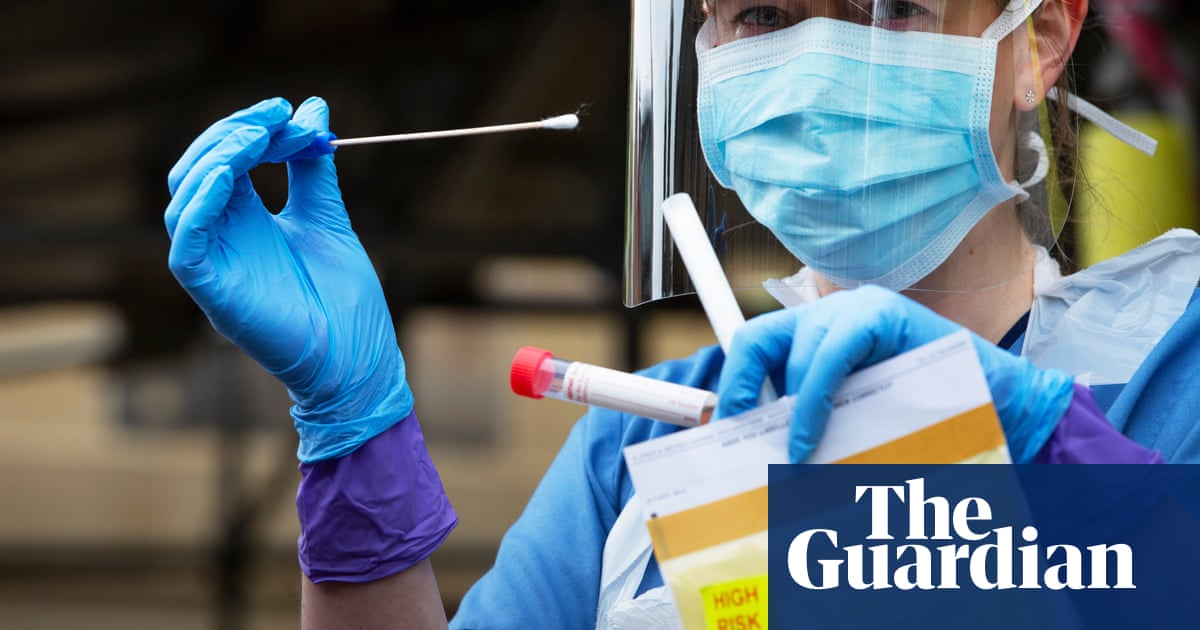 Up to 10% of England’s population could be tested for coronavirus every week after government officials asked local health chiefs to deploy 30-minute saliva kits in an acceleration of Boris Johnson’s controversial “Operation Moonshot” mass screening plan.

In a letter seen by the Guardian, NHS Test and Trace asked all directors of public health to sign up to receive rapid-result test kits for up to a tenth of their populations every week as part of “an exciting and important new front in our fight against coronavirus”.

If delivered, it could result in a huge increase in national testing – up to 5m tests weekly from the current rate of about 300,000 so-called PCR tests a day, carried out by swabbing the nose and throat.

But local health chiefs raised serious concerns over the logistical challenge and cost of rolling out the tests and tracing the contacts of those who test positive. It came as UK coronavirus deaths surpassed 300 for the second day in a row, with 24,701 more cases and more than 9,500 people in hospital.

Last week Matt Hancock, the health secretary, told parliament the government had bought “many millions” of saliva tests made by the company Innova. Johnson said on 16 October that the tests would become available “to help control localised outbreaks” but the latest strategy also extends beyond saliva test trials announced for schools, universities and care homes.

In the leaked letter, Alex Cooper, director of rapid testing at NHS Test and Trace, said: “Each director of public health will be eligible to receive on a weekly basis the number of tests equivalent to 10% of their population.”

The roll-out will be “phased” with areas under tier 3 restrictions – such as Liverpool and Manchester – prioritised, with the potential to test the whole local population every 10 weeks.

But Cooper said: “It is our ambition that we will be able to make this technology available for local areas to roll out at pace,” adding that the programme will go nationwide “as quickly as possible”.

Some local public health directors have dismissed the idea already. One said he would refuse to take part because the tests were “short on scientific backing” and his stretched staff lacked the capacity to deliver at such scale. Another said the lack of any proposed support to track people’s close contacts if they test positive rendered it pointless.

The saliva tests, known as lateral flow tests, deliver results far faster than PCR tests, which are taking longer than 48 hours to process in many cases. They are aimed at testing asymptomatic people to “protect those at higher risk, find the virus, break transmission and enable wider social and economic activity,” NHS Test and Trace told public health directors.

Aside from key workers, PCR tests are only available to people with symptoms of Covid-19.

The saliva antigen tests do not require a laboratory-based RNA extraction. They have been clinically validated, according to NHS Test and Trace, but still require operational validation. The government has purchased up to 20m of the £15 tests according to reports.

The first details of Operation Moonshot emerged in September when leaked documents showed how it is using private consultants including Deloitte to potentially spend up to £100bn on mass screening.

On Wednesday, academics at Glasgow, St Andrews and Newcastle universities warned its stated target of reaching 10m daily tests “will generate 10,000 people testing falsely positive a day and result in unnecessary isolation and hardship for them and their contacts”.

Local authorities were asked to express interest in the programme by Monday this week. Eugene Milne, Newcastle’s director of public health, said he wants to explore using the tests for screening relatives of care home residents across north-east England so visits can restart and care workers can work between nursing homes and houses.

However, others are less keen. “I’m going nowhere near it,” said Greg Fell, director of public health in Sheffield. “It is an interesting idea, but is short on scientific backing and has huge logistical challenges. I don’t have the capacity for that. We ought to focus on delivering on stuff there is scientific basis for as opposed to taking out attention to things which aren’t yet established.”

Another senior director of public health, who asked not to be named, said: “They have come to us with a proposal that is poorly thought through. It is not clear what the cost is or the amount of work involved and there is nothing about contact-tracing.”

NHS Test and Trace, headed by Dido Harding, wants local authorities to “be responsible for site selection and deployment of [lateral flow] testing in line with their priorities”.

Local health chiefs will also have to recruit and train their own workforces to carry out the tests and will have liability for clinical protocols. Councils will have to provide digital notification of positive tests and organise standard PCR swab tests to confirm results.

The anonymous director of public health continued: “There is no point in testing large numbers of the population unless you do something with the results. We really, really want to improve testing and tracing, but once again this is the wrong way to go about it.”

The offer comes as NHS Test and Trace has seen its performance worsen in recent weeks. After last week’s figures, the prime minister expressed “frustration” at the system’s shortcomings and Sir Patrick Vallance, the government’s chief scientific adviser, admitted rising caseloads are “diminishing its effectiveness”.

A senior public health source who has been on calls about the project with the Department of Health and Social Care (DHSC) said the attempted national roll out appeared rushed.

“We don’t know who does the contact tracing or how the workforce [to carry out the tests] is resourced,” they said. “We are trying to work out how this fits with the test and trace strategy with PCR testing and how any positive results are followed up and people are isolated.”