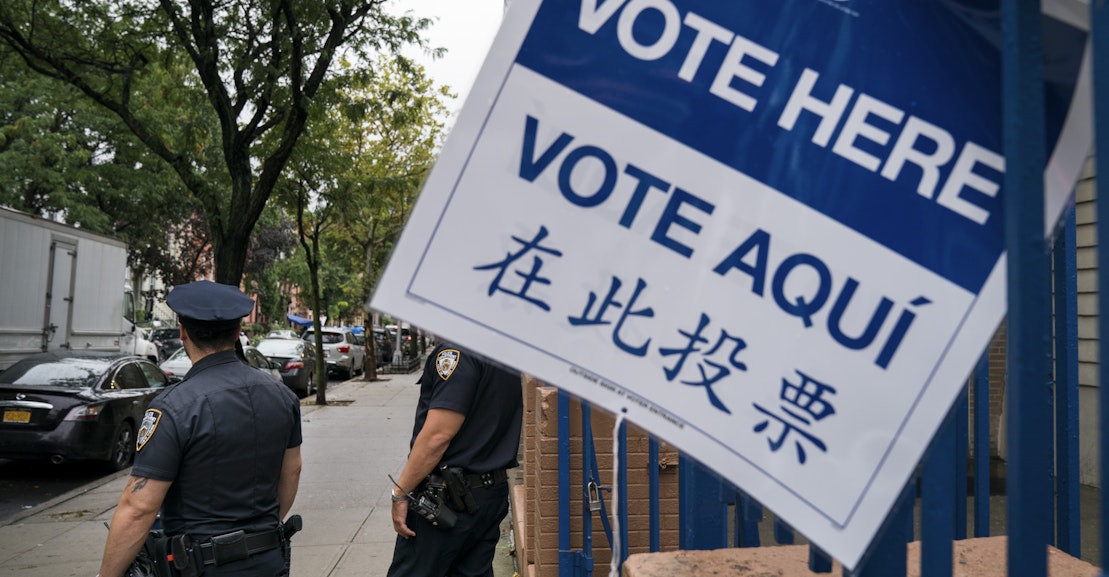 Police are struggling “to protect voters and avoid intimidation at the polls,” The Wall Street Journal reported Monday, by which they meant that at least some of the law enforcement officers they spoke to understood that police presence could itself be a tool of voter suppression. “I feel like I’m walking on the edge of a razor blade,” a rural Virginia police chief told NBC News which noted, “He’s spent the past several weeks trying to figure out how to provide security at the polls amid the threat of armed troublemakers without scaring away the kind of voters who might be put off by the sight of uniformed policemen.” Nevertheless, as a retired police chief of Montgomery County, Maryland said to the WSJ, the only response to such violence from private actors that police can conceive of is the threat of violence they can wield. “The question is, are you going to have people who are self-appointed security people who just show up to these places with guns?… That is just a nightmare for police to handle.”

It is already too late to speculate. In St. Petersburg, Florida, two armed people wearing private security guard uniforms who said they were working for Trump showed up at a polling place. “I noticed his gun, that was the first thing that I noticed as a voter was that this man was carrying a weapon,” one voter told the local news. “He wasn’t there to vote, he was standing there to make his presence known.” The Pinellas County sheriff said he didn’t think it was voter intimidation, because the guards were standing outside the no-electioneering zone. (The Trump campaign denies involvement, and a representative for the private security firm where the guards worked did the same.) In Fairfax, Virginia, Trump supporters with big Trump flags, part of a “Trump Train” car parade, also stayed outside the zone, chanting “four more years,” lined up outside an early polling place. Polling staff felt intimidated, election officials said, and had to open up more indoor space so voters could wait without interference from them.

Given reports of “inappropriate campaigning and possible voter intimidation” in at least 14 states, according to the The Washington Post, perhaps police are not—in this case, anyway—over-stating the threat. And they were not wrong, either, to admit that they could also be the election threat. In Miami, a uniformed officer inside a polling station wore a “Trump 2020” mask. Another cop, on the first day of early voting in New York this weekend, used his patrol car to blare “Trump 2020” at people in the street, taunting them for recording it. The city’s largest police union, which has endorsed Trump, blasted the city and police officials after that officer was suspended without pay.

Most tactics to challenge voter intimidation take for granted that it is coming from private actors without the tacit support of public officials. Election officials tell polling place staff to call the police if they need them to respond to voter intimidation. Yet what about those officers who may plausibly believe they are following orders from the president when they side with the Trump supporters trying to intimidate voters? After all, Trump promised that law enforcement would be dispatched as poll watchers. It’s clear this is a partisan effort for Trump, who sees the police as “his” police. But neither is it outside his party’s purview—a Republican election 2020 plan reported earlier this year included dispatching retired military and law enforcement officers as poll watchers. It’s long past time for election officials to reckon with the reality that the police may be a threat to free and fair elections. Any effort to challenge voter intimidation has to account for that.

Who are voters supposed to report voter intimidation, then, particularly when police are part of the problem? Representative Elissa Slotkin of Michigan told Politico that she is getting calls from people concerned that local sheriffs won’t respond to armed people at the polls—and some elections officials say they are hearing the same thing from their respective city and county officials. The response from the state attorney general? If local police won’t respond, call the state police.