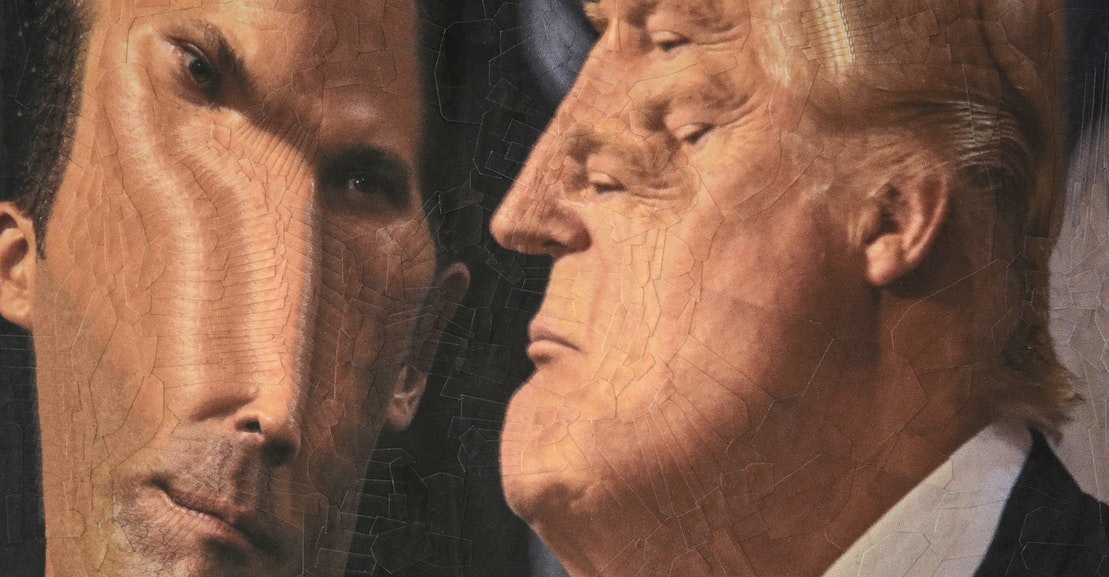 It is someone’s birthday, and everybody is dressed up. At the business end of an expansive buffet, an exhausted lump of beef perspires as if under great duress beneath a heat lamp; a man in a chef’s hat saws flaps from it until guests signal him to stop. A pale tide of mashed potatoes ripples thickly from within a chafing dish; the long-handled spoon that revelers use to serve themselves sits on a little plate in front of it, next to a sign attesting in flouncy cursive that those are indeed mashed potatoes. On a bed of ice cubes, oysters puddle in their shells next to a sliding pinkish moraine of shrimp.

It is quite a room, so painstakingly grandiose that it looks somehow like an expensive stage set of itself. The environs are so ferociously air-conditioned that it could be described as windy. There are columns everywhere, and a huge chandelier squats over everything, leering. The president of the United States is there—this party is not necessarily for him, but it is in every meaningful sense his party—and he moves through the room making strange jokes that mostly scan like insults, about how much the guests have all paid him for the privilege of being there. They don’t mind, and laugh as much out of reflex as anything else. The faces look up at him, powdered or dusty or unaccountably wet, and President Donald Trump lets those people thank him—for his hard work, for saving the country, for whatever they can think of to thank him for in that moment. They don’t really know, and he doesn’t know, either. They are mostly thanking him for being there, in the room with them. Great to see you, he says. Enjoy. And then he moves on to some other pod of swells, all waiting to thank him, too.

The party is the same every time because the sameness is the whole purpose. Everyone there honors Trump not just with their words and applause and fulsome laughter but through the shape their celebration takes. Every bit of venal gossip shared between guests about other people in attendance, every garbled rehash of some vague outrage they saw on television or scrolled past online or heard through the grapevine, every urgent and heated personal taking of offense at some faraway abstraction—all of that is a tribute to Trump. It’s a tribute both because this type of instinctive mirroring really is the sincerest form of flattery, but mostly because every line of that conversation, every toast made ostensibly in someone else’s honor, will invariably wind up being about Trump. The thing celebrated, on Christmas Eve or the Fourth of July or some random Friday in April, is victory, and the ultimate winner—the one no one thought would win, the one they all wanted to lose—is always the same. There’s nothing and no one else to talk about, by definition and by design.

When Trump brings this party elsewhere and shows up gleaming to some swing-state rally, he generally talks about what’s troubling his damp and roiling mind—what he saw on television last, how unfair his enemies are to him, whatever lines that worked last time—and is thanked wherever the pauses fall. At a rally on September 10, when he reached the end of a meandering riff about the miraculous effects of Sending in the Authorities to quell protests in cities around the country, the crowd began chanting, “We love you.” Trump pantomimed wiping away tears and told the crowd they were going to make him cry, then noted that crying would be bad for his image. In its coverage of the event, Fox News described the moment like this: “Trump, who is famous for rarely showing emotion, could be seen taking a step back from the rostrum while he seems to collect himself.” The story also noted that Democrats criticized Trump for holding the rally, at which few attendees wore masks, during the coronavirus pandemic.

This is Trumpism as it exists at the end of Trump’s first term in office. The long victory party continues even as the country is everywhere sickened, burning, drowning, starving, poisoned, bludgeoned, evicted. Actions and their consequences seem to have slipped out of their binaries; there is a level of irresponsibility so profound that it threatens a baseline understanding of causality. The problems are ignored or exacerbated by the state, and the chaos that results is haphazardly leveraged by powerful people for advantage and profit. On conservative television, the very existence of the problems is qualified or dismissed, with a furious but deeply sincere cynicism that reflects Trump’s own, as the dark work of the president’s many enemies. The country is failing in terrifying and undeniable ways, but Trumpism—which is not a politics or an ideology so much as it is the belief that nothing matters beyond how it relates to Donald Trump himself—remains unscathed.