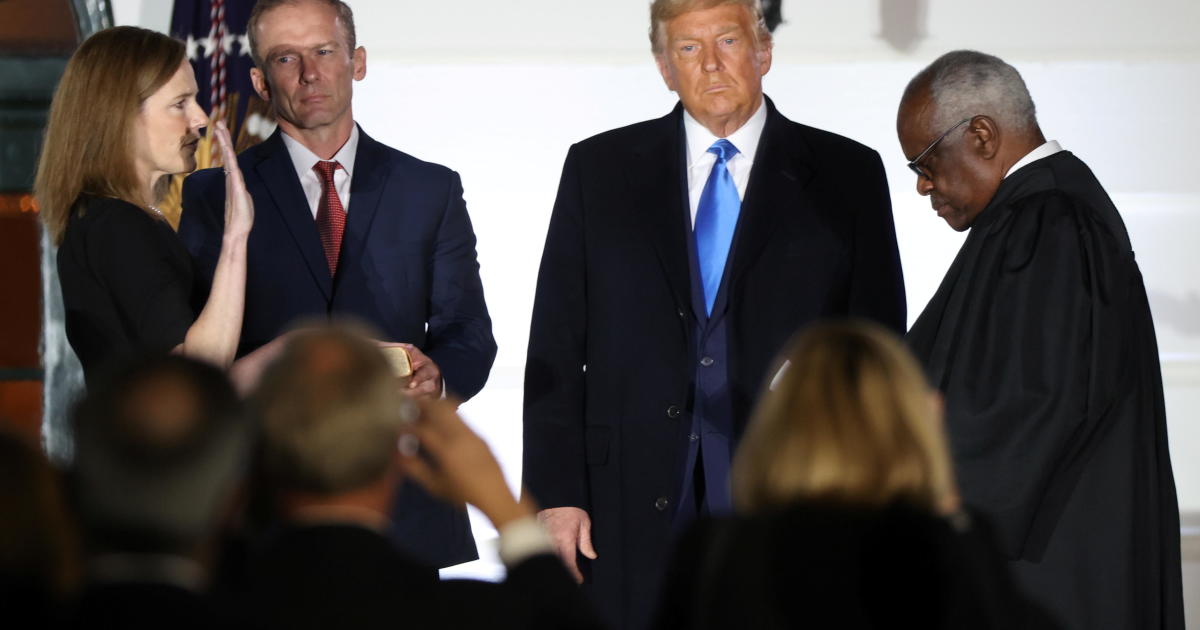 The Senate confirmed Judge Amy Coney Barrett to the Supreme Court on Monday, just days before Election Day, solidifying the conservative majority on the court as it is set to consider several high-profile cases in the coming months. She was sworn in shortly thereafter by Supreme Court Associate Justice Clarence Thomas at the White House.

Barrett was confirmed by a vote of 52-48 on Monday evening, after Democrats exhausted the procedural maneuvers undertaken to delay her confirmation. Only one Republican, Senator Susan Collins, voted against confirming Barrett to the Supreme Court. All the Democrats voted against her, including red state Senators Doug Jones of Alabama, who is up for reelection this year, and Joe Manchin of West Virginia, who voted to confirm Brett Kavanaugh in 2018.

Barrett’s confirmation has left Democrats concerned about the fate of the nation’s health care law, the Affordable Care Act, and Roe v. Wade, the landmark decision allowing women to have access to abortions. The court will be hearing a case on the constitutionality of the ACA’s individual mandate in November. Barrett could also end up weighing in on a general election-related case involving the man who nominated her, should the results of the race between President Trump and Joe Biden come before the Supreme Court.

Immediately following her confirmation, the White House held an event to celebrate, this time, with attendees spread out and mostly masked, unlike the event to celebrate Barrett’s nomination. Justice Thomas administered the constitutional oath to Barrett, with President Trump standing in between Thomas and Barrett.

“I am grateful for the confidence you have expressed in me, and I pledge to you and to the American people that I will discharge my duties to the very best of my ability,” Barrett said after she was sworn in.

Barrett emphasized that she will be independent from the legislative and executive branches, as she made her confirmation speech from the White House grounds.

A senior White House official told CBS News face coverings were required, and the chairs were spaced out, in contrast to the nomination ceremony in the Rose Garden earlier this month. Several attendees of the ceremony, including the president, tested positive for COVID-19 after that “super-spreader” event.

The Trump campaign celebrated Barrett’s confirmation in a statement.

“Justice Amy Coney Barrett is a reminder to millions of Americans why they voted for President Trump in the first place. She is now the third solid, conservative Justice appointed to the Supreme Court by the President and she will apply the Constitution and not turn the Court into a super legislature,” Trump campaign legal adviser Jenna Ellis said. “Her nomination and confirmation exposed the radical leftist plan to pack the Court by expanding its size, and also put Joe Biden on the spot. He must now come clean with the American people, reveal his list of prospective justices, explain his position on court packing, and stop telling voters that they ‘don’t deserve’ to know what he thinks.”

Republicans have praised Barrett’s qualifications and her judicial record, but Democrats have slammed Republicans for pushing Barrett’s confirmation so close to Election Day after Republicans blocked Merrick Garland’s nomination to fill Justice Antonin Scalia’s vacant seat in 2016. Republicans argued at the time that a Supreme Court nomination should not be considered in an election year, that voters should be able to weigh in by choosing their president. The newly elected president, they said, should select the justice.

Scalia died nine months before the 2016 election. Republicans had a new argument after Justice Ruth Bader Ginsburg died a month and a half before the 2020 election — when some states had already begun early voting. Now, they say it’s appropriate to fill the vacant seat before the election, because one party currently controls both the Senate and the White House.

McConnell also noted that the confirmation process for Barrett was entirely legal and constitutional, despite Democratic claims that it was “illegitimate.”

“All these outlandish claims are utterly absurd, and the louder they scream, the more inaccurate they are,” McConnell said. McConnell also argued that while Democrats often complain that Mr. Trump does not accept outcomes he does not like, “they’re flunking that very test right before our eyes.”

In his speech on the Senate floor ahead of the vote on Monday, Senate Minority Leader Chuck Schumer excoriated Republicans for pushing the vote through ahead of Election Day. He hinted that he may support ideas such as adding justices to the Supreme Court if Democrats take the majority next year.

“You may win this vote. And Amy Coney Barrett may become the next Associate Justice of the Supreme Court. But you will never get your credibility back,” Schumer said. “And the next time the American people give Democrats a majority in this chamber, you will have forfeited your right to tell us how to run that majority.”

During her confirmation hearings, Barrett followed the time-honored tradition of refusing to weigh in on cases that could come before her as a justice. Barrett will be the third justice nominated by Mr. Trump, after Justices Neil Gorsuch and Brett Kavanaugh.

Democrats questioned her judicial philosophy during her confirmation hearings, since Barrett has said she aligns herself ideologically very closely with the late Justice Antonin Scalia, for whom she once clerked. Scalia dissented in cases that upheld the ACA and expanded LGBT rights, raising concerns she might vote in a similar fashion.

“I assure you I have my own mind. Everything that he said is not necessarily what I would agree with or what I would do if I was Justice Barrett,” Barrett said about Scalia.

However, Democrats were disappointed by her refusal to answer simple questions with clear answers, such as whether it is constitutional for a president to move Election Day or prevent anyone from voting.

Collins and Senator Lisa Murkowski were the only two Republicans in the Senate to express opposition to filling the vacancy left by Justice Ruth Bader Ginsburg’s death so close to the election. Murkowski announced on Saturday that she would vote to confirm Barrett, but Collins will oppose the nomination “because this vote is occurring prior to the election.” Collins made clear her plan to vote against confirming Barrett was not a reflection of the judge’s qualifications, but rather being “fair and consistent.” Both voted Sunday against limiting debate on Barrett, a break from the rest of the GOP.

In a speech on the Senate floor on Friday, McConnell argued that “every escalation has been initiated from the other side.” He blamed former Democratic Majority Leader Harry Reid for invoking the “nuclear option” in 2013, a procedural move that changed the Senate rules so that instead of a three-fifths majority, only a simple majority of 51 votes would be needed to confirm presidential nominees — except for Supreme Court nominees.

In 2017, McConnell applied the “nuclear option” to Neil Gorsuch’s Supreme Court nomination, enabling him to be confirmed 54 to 45. He also argued Republicans had acted within the rules and within the Constitution in blocking Garland’s confirmation in 2016.

But Schumer on Friday told McConnell that he doesn’t “have the right to argue consistency when you’re doing what you’re doing now.”

“The Republican majority’s monomaniacal drive to confirm this justice in the most hypocritical, the most inconsistent of circumstances, will forever defile the Senate and even more importantly, curtail the fundamental rights of the American people for generations to come,” Schumer said.