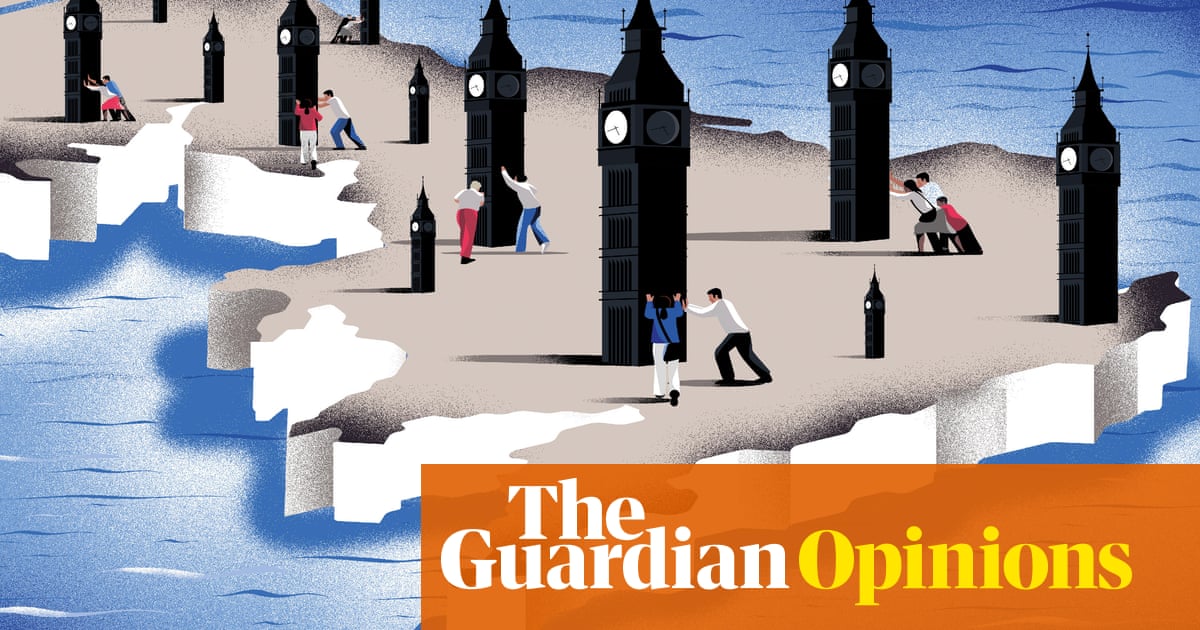 For those of us who have always longed for British politics to shift its focus beyond Westminster, last Tuesday afternoon brought a tantalising glimpse of an alternative reality. A gathering of press and politicians outside Manchester’s Bridgewater Hall produced one moment of solid-gold drama: when the mayor of Greater Manchester, Andy Burnham, suddenly received confirmation that his region would soon fall under tier 3 of the government’s Covid-19 restrictions via a message on a mobile phone, and pronounced the decision “brutal”.

But even without that jaw-dropping incident, the occasion was full of symbolism, and the sense of things that had long been kept on the political margins suddenly bursting into the foreground. “Manchester is a city which has witnessed a great many stirring episodes, especially of a political character,” wrote Emmeline Pankhurst in 1914; here was another example of its talent for the kind of moments that speak unanswerable truths.

Next to Burnham stood the deputy mayor and leader of Manchester city council, Richard Leese, the holder of the latter role since 1996 – and, whatever the controversies that swirl around the latter-day reinvention of the place he serves, someone who has led a miracle of regeneration and economic success. Not for the first time, he and his colleagues were on the receiving end of grim treatment from ministers in London with none of their experience or knowledge. The same story flared up through the New Labour years, turned utterly toxic with the arrival of austerity, and since the spring, has defined much of England’s experience of the pandemic. But this time, elements of the media and politics who usually fixate on Westminster were suddenly listening.

It would be nice to think that some observers got a sense of the stupidities that Burnham, Leese, and scores of other regional and local leaders have to navigate on a daily – or, in times like these, hourly – basis. People who ought to be carefully listened to repeatedly find themselves being lectured to by nonentities, something pitifully encapsulated in a recent report from the Manchester Evening News’s Jennifer Williams about council leaders logging on to a Microsoft Teams call with the local government secretary, Robert Jenrick, and finding that they could not unmute themselves.

There remains an overwhelming sense that policy on Covid restrictions and economic help is being landed on places at a moment’s notice. Sooner or later, this kind of condescension had to be challenged, and it is entirely fitting that Manchester has led the charge.

The very British malaise this story highlights (which is most clearly manifested in England, although all four countries of the UK now have over-powerful administrative centres, and weak local government) goes back more than a century, to a diminishing of civic leadership by national government that began in the early 1900s, and reached a peak in the Thatcher era, with a sustained assault on city and local government, and the idiotic abolition of England’s metropolitan county councils.

During the coalition years, George Osborne’s creation of so-called metro mayors was presented as an act of rebalancing: when the 2015 Conservative party conference was held in Manchester, he drew attention to the city’s town hall as “a great civic cathedral, where the decisions affecting this city would be taken – not remitted to a committee in London”.

But the powers held by a new crop of regional leaders were far too limited. And besides, the idea of a great civic rebirth across England was always rendered unconvincing by Osborne’s catastrophic spending cuts, a policy that did not only lead to a savaging of local services that is ongoing, but – in forcing Westminster’s priorities on councils that wanted no part of them – also represented a direct attack on democracy and accountability.

So it was that many of the places destined to experience the worst of the pandemic were denied the means to cope. As the government flails around, it is telling that politics is haunted by the contrasting example set by Germany, where regional and local politicians have a level of authority that the average minister here would think terrifying.

Consider, for example, the southern German town of Rosenheim, which has a population of around 65,000, and was one of the virus’s early German hotspots. To quote the country’s health minister, as the authorities there got to work, “there were really no instructions from Berlin. Decisions were made locally, on the spot.” This is the very opposite of the approach taken here, a difference reflected in the fact that the UK’s death rate is around six times higher than Germany’s. But will anyone learn?

The government now wants to shake up the British state, but in a way that will leave its chronic power imbalances unchanged: Dominic Cummings’ quest to upturn the civil service has received a lot of attention, but masks an intention to guard centralised power as jealously as ever. Over the summer, ministers floated plans to abolish district councils in England and increase the number of elected mayors, but they were vague and contradictory, and have since been postponed.

Whatever its outward posturing, the current administration’s basic instincts are exemplified by very real proposals to strip councils of planning powers, and recent Tory noises about ending their responsibility for social care. Last week, moreover, brought the news that unless the London mayor, Sadiq Khan, accepts a larger congestion charging zone, increased council tax and fare rises, the government is minded to seize control of Transport for London: proof of the fact that the politics of centralised banditry damages the capital just as much as anywhere else.

There is an alternative to all this dysfunction, but the Conservative party led by Boris Johnson will never go near it. Labour also has longstanding centralising instincts that always make conversations about redistributing power far too difficult, when the outlines of a different system actually seem pretty straightforward.

Mayors and councils need decent tax-raising and borrowing powers. A whole range of responsibilities – over health and social care, education, housing and transport – ought to be spread across regional, city and local government, not on the basis of the current model of ad hoc “deals”, but a uniform shifting of power and resources. With the benefits system and so-called welfare-to-work now colliding with rising unemployment, most of the things overseen by the Department for Work and Pensions should be pushed in the same direction. On any matters of national emergency or strategic importance, politicians at the centre should always bring in leaders from outside. And decision-makers from all sides need to embrace one key matter of consensus: that austerity will never again be visited on local councils.

Last week, my Manchester-based colleague Josh Halliday offered some advice to the national media: “If you want to know what’s going on here – to be really plugged in – then you have to be here.” As a basic guide to action, that might as well apply to just about every aspect of how we run things, right up to the top of government. Such is the key lesson of the first phase of this crisis: that power and responsibility have to be radically relocated, before our age of failure and rupture finally breaks the system for good.

• John Harris is a Guardian columnist