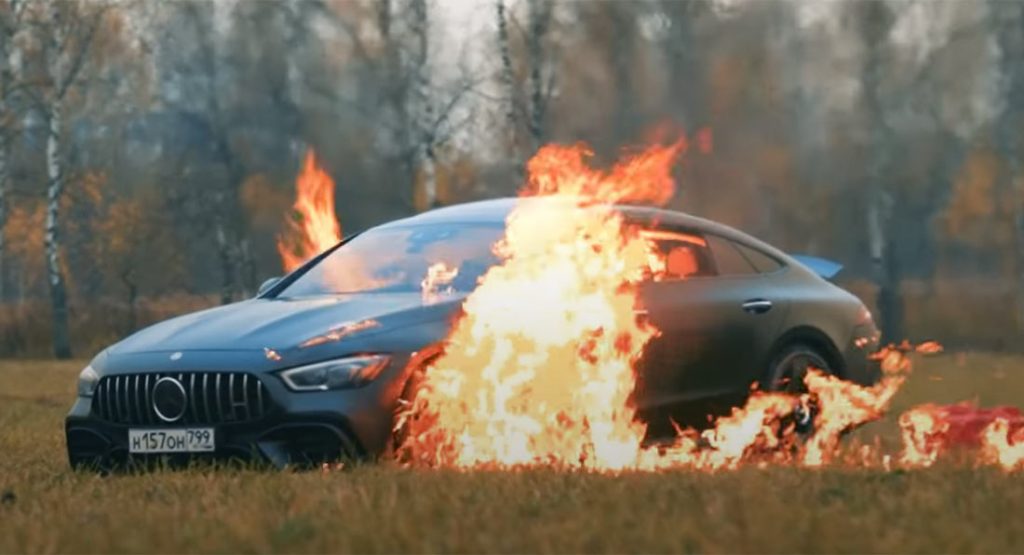 The Russian owner of a Mercedes-AMG GT 63 S has set his luxurious four-door alight in a protest directed at the German car manufacturer.

This particular GT 63 S is owned by a Russian vlogger by the name of Mikhail Litvin who has almost 5 million subscribers on YouTube. In just a couple of days after being posted online, the video of him destroying the car with fire has attracted over 8 million views.

It is claimed that Litvin encountered a host of issues with the expensive Mercedes model and claims to have sent it to a local Mercedes dealership five times but the dealer apparently refused to repair it (we’re having a little difficulty believing this…).

Regardless of the reason, the video shows the GT 63 being parked in the center of a grassy field before the vlogger starts to pour gasoline across the exterior of the car, and then, throughout the interior. He then pours gasoline across the grass in a trail leading towards the AMG. He proceeds to use the remaining gasoline to cook up some sausages before lighting the gasoline-soaked grass.

While the vlogger may claim to have destroyed the car in a protest to Mercedes, we think it is far more likely he simply did it as a publicity stunt to attract views and subs. If this video gets enough views and he attracts lots of new subscribers (we’re talking millions of counts for both), he just might earn enough down the road to replace the car.

Interestingly, this isn’t the first time we’ve seen a popular Russian YouTuber destroy a Mercedes-Benz as last year, another social media influencer dropped a G63 from a helicopter.