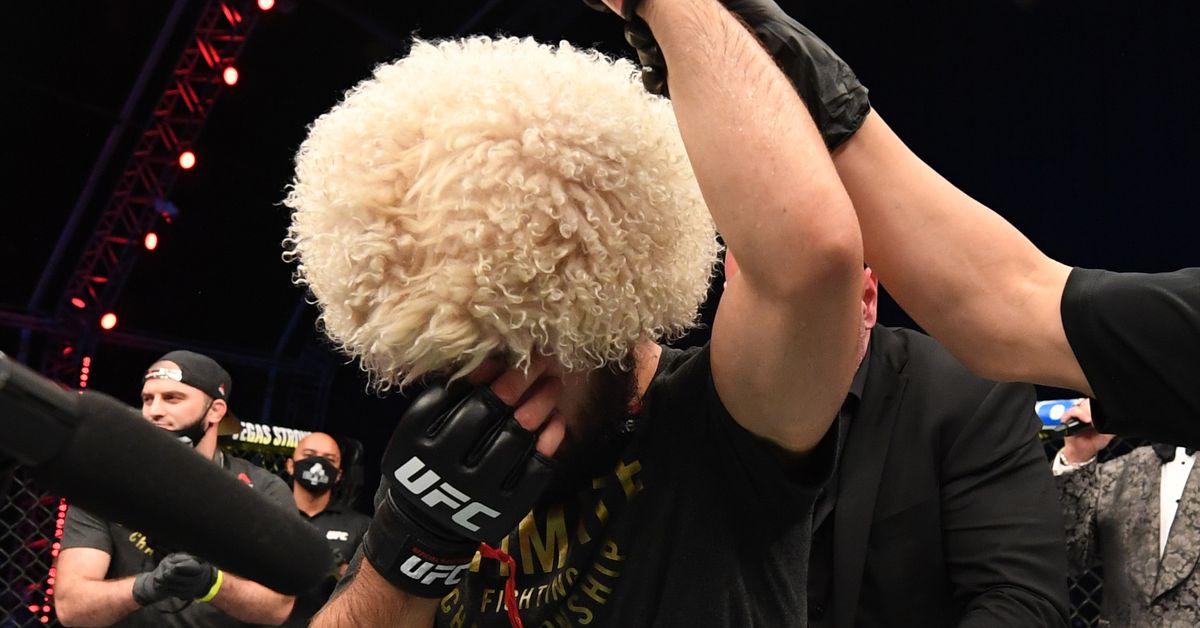 When UFC lightweight champion Khabib Nurmagomedov laid his gloves on the canvas after beating Justin Gaethje at UFC 254, fans weren’t the only ones shocked.

Nurmagomedov’s longtime coach, American Kickboxing Academy’s Javier Mendez, said he had no idea Nurmagomedov would call it a career this past Saturday in Abu Dhabi.

“He played the best poker face on the planet,” Mendez told Submission Radio.

Throughout a difficult training camp for the lightweight title unifier, Mendez said the 32-year-old champ never gave an inkling of his plans after the fight. Of course, the coach wasn’t eager to “touch on that subject” given the enormous personal tragedy Nurmagomedov had suffered just three months earlier when his father and longtime coach died due to complications from COVID-19.

“I didn’t want to get him sad, because I never really got to talk to him about his father about how he felt, because it was passed and I figured, that’s in the past, I’m not bringing any of that up,” Mendez said. “So all of this was a total shock to me. I’m listening to him going, ‘Oh man, father’s plan, great.’ But mother’s plan works in the end.”

There were more immediate issues to focus on in camp. From Nurmagomedov showing up with a case of the mumps, to a broken toe suffered in the weeks before camp, to a fight against a foe many expected to be the toughest of his career, the coach and fighter had a lot on their hands. Even in the final moments before the pay-per-view headliner, Mendez said, there were moments where he didn’t know if his fighter was in the right head space.

Mendez said the absence of Nurmagomedov’s father, Abdulmanap, was the obvious difference in preparing for the champ’s 29th fight. Even though Mendez only worked in person with Abdulmanap Nurmagomedov for his son’s previous fight, a title defense against Poirier, he noticed the fighter’s behavior was not the same.

“As a coach, you notice your fighter’s antics and what they do and don’t do,” he said. “But I understood why.”

Mendez also addressed a briefly simmering controversy from the event that stemmed from Nurmagomedov’s weigh-ins. It appeared the champion did not stand on the scale long enough before the UFC official operating the scale declared him on weight. Fans and journalists questioned whether Nurmagomedov, who’s previously struggled with weight-cutting, had pulled a fast one and dodged a miss that might have changed the stakes of the fight.

On Thursday morning, one day prior to the weigh-ins, Mendez said Nurmagomedov weighed, 161 pounds, or six pounds from the 155-pound mark required of the title fight. The team was going to do a second weight cut on Thursday evening, but Nurmagomedov said he was instead going to wake up early on Friday morning and cut the remaining weight. Mendez didn’t attend the weight-cutting session – he doesn’t do so in general – and after getting a positive report from Nurmagomedov’s teammates, he started getting calls about a potential problem on the scale.

“I’m like, what the hell are people talking about? He was right on point,” Mendez said. “There’s no way something went wrong. And then I watched the weigh-in, and the guys that were doing the scale thing, man, those guys were speedy Gonzales? What the hell were they doing? That was so damn quick the way they did that. I would think something’s up myself, personally.

“If you watch [the weigh-in], which I did watch, Khabib grabbed both of those guys hands, he steps on the scale, and as soon as he releases his hands, the guys are like already. It’s like, what the f*ck? Why’d they go so fast with the scale? He was on weight. He was on point.”

Mendez said a close review of the video shows Nurmagomedov was on weight, but admits the episode “did look suspicious.” The responsibility for the bad look, however, rests with the weigh-in officials, not Nurmagomedov.

In the end, the lightweight title fight was certified, and Nurmagomedov went on to have a brilliant performance against Gaethje. If it’s the last one the world sees, Mendez said he’s fine with that; he hasn’t spoken to the champ about the decision and won’t because he respects his fighter.

“This sport is not a longevity sport,” he said. “It’s come in and come out. He’s coming out at the time he feels is the right time for himself and his family. Myself, I would have liked to have seen him go 30-0, like his father wished. But he loves his mother so much in his family he decided, no, it’s fine. And financially, he’s set. So he’s not a greedy man.

“If he hung on for one more fight, it would have been a monster payday. But obviously, family means more to him than money. That’s why people love him so much. That’s why the Middle East has gotten so huge in popularity. It’s all solely because of Khabib. There’s other factors, but he’s the main reason.”

Moving forward, the coach plans to work with Nurmagomedov as a fellow coach, shaping up-and-coming talent. But he doesn’t expect the champ will change his mind about leaving the sport as a fighter.

“He’s never been somebody that said something and not meant it,” Mendez said. “For me, I’d have to say that part’s done. Anything’s possible. As much the fans and myself as a coach would love to have him back, no, I think he’s done. And you’re not going to get me to convince him otherwise.”

Check out the full interview: