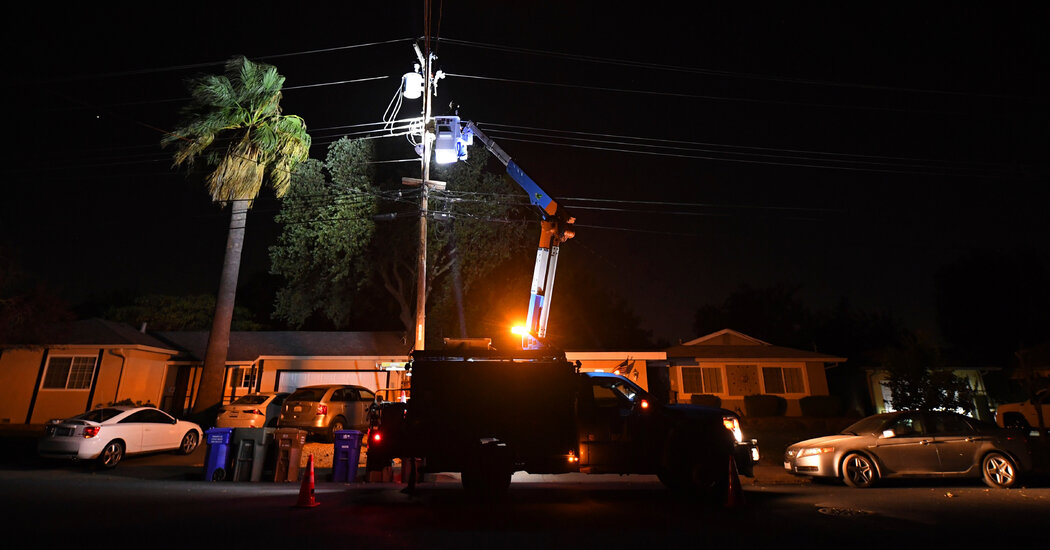 A new fire in Southern California forced tens of thousands of people to evacuate on Monday, and the state’s biggest utility cut off power for hundreds of thousands to try to prevent more fires in this year’s devastating season.

A vegetation fire called the Silverado Fire broke out around 6:47 a.m. local time on about 10 acres, according to the city of Irvine, Calif. By about midday, it had already burned about 2,000 acres, the state fire agency, CalFire, said.

The agency said on Monday that about 4,000 firefighters were fighting 22 wildfires across the state. So far this year, more than five million acres have burned in Oregon, Washington State and California.

“The fire started in Silverado Canyon, and helicopters and fixed wing aircraft are on the way,” Mayor Christina Shea of Irvine said in a statement on Monday. “The wind is making it move very quickly.”

The Orange County Fire Authority said that about 60,000 people were affected by evacuation orders in the Irvine area, and that flames had jumped a highway, State Route 241, forcing part of it closed.

The evacuations came as hundreds of thousands of people in California lost power on Sunday because of what CalFire called “extreme fire weather conditions” such as high winds and low humidity that could increase the risk for more wildfires. The agency said that in Northern California, winds would be between 20 to 30 miles per hour, with some gusts of up to 70 m.p.h. In Southern California, it said, gusts associated with the Santa Ana winds could reach up to 80 m.p.h.

Videos shared by the Orange County Fire Authority showed a thick haze of brownish smoke blowing over charred debris and lines of fire by roads.

The state’s biggest utility, Pacific Gas & Electric, began shutting off electricity to 361,000 customers in 36 counties, including Alameda, Alpine and Amador, on Sunday, the company said in a statement. The shut-offs were expected to continue into Monday evening.

The company said that the shut-offs were in response to a “significant, offshore wind event starting Sunday that is forecast to have the driest humidity levels and the strongest winds of the wildfire season thus far.”

The company added that the weather was expected to subside Monday morning “for the majority of customers, and by Tuesday morning for the remainder.”

On Monday morning, the National Weather Service in San Francisco issued red flag warnings, meaning that fire weather conditions were occurring or would be shortly, from Santa Rosa to Santa Cruz. The service said that winds would be strong enough “to down weakened trees and power lines.” The service added that “extreme caution should be taken to prevent new fire starts.”

Pacific Gas & Electric, which emerged from bankruptcy in June after incurring an estimated $30 billion in wildfire liability, has increasingly used shut-offs to prevent its equipment from causing fires during extreme weather conditions.

The utility expects to begin restoring power on Tuesday. PG&E, which provides electric and gas service to 16 million people in Northern and Central California, has used the “public safety power shut-offs” more broadly than other utilities in the state after it filed for bankruptcy in January 2019. Southern California Edison and San Diego Gas & Electric, the state’s two other investor-owned utilities, have taken a more surgical approach, with fewer power shut-offs.

Earlier this month, PG&E reported to state regulators that its equipment might have been involved in the cause of the Zogg Fire, which killed four people, destroyed more than 200 homes and businesses and burned 56,338 acres. Last week, fire investigators announced that PG&E’s equipment had caused the 2019 Kincade Fire, which destroyed 374 buildings and burned more than 77,000 acres.

Experts have linked the worsening fire season to climate change. Warming caused by emissions of carbon dioxide and other heat-trapping gases from burning of fossil fuels has led to warmer and drier conditions — making trees and brush more prone to burn.