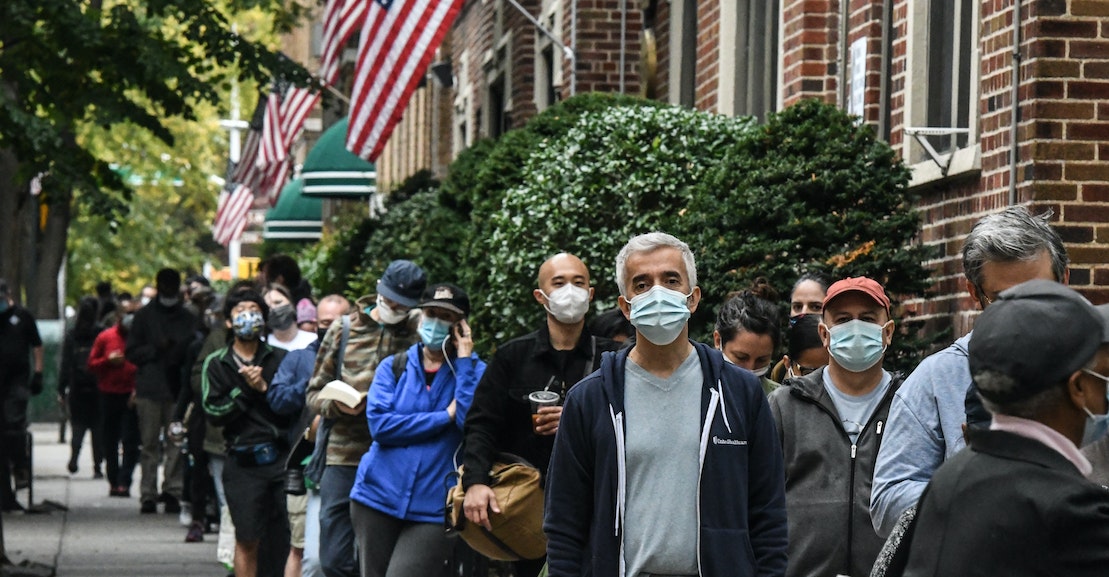 Standing in front of a gaggle of press on a New York City sidewalk, Representative Alexandria Ocasio-Cortez assessed the situation playing out during the city’s first three days of early voting in the 2020 general election—lines wrapping around the block, people being forced to stand for hours just to cast their ballot—and called the mess for what it was: voter suppression. “There is no place in America that two-, three-, four-hour waits to vote is acceptable,” Ocasio-Cortez said. “Just because it’s happening in a blue state doesn’t mean that it’s not voter suppression.”

The pandemic has upended all kinds of otherwise mundane activities, including how we vote. Already, voters in major swing states and elsewhere have turned in absentee ballots and showed up for early voting at record rates. And it would be nice, relatively speaking, to believe that the pandemic was the main reason voting is such a slog this year. But this isn’t a new problem. Disenfranchisement and voter suppression have been a consistent issue for years in New York, and mismanagement has run rampant throughout New York City’s Board of Elections. It’s part of the same anti-democratic tendency that animates conservatives in red states, but with a liberal twist: Low turnout serves Democratic incumbents well in safely blue states. That’s why we’re in this mess.

In January 2019, New York Governor Andrew Cuomo finally put his pen to voter-participation legislation drawn up by the state Assembly. With his signature, the state enacted a series of bills aimed at opening up the ballot box. One bill provided the option of in-person early voting up to 10 days before an election. Others preregistered teenagers applying for a drivers’ permit, automatically transitioned voters who moved in-state, moved the primaries up three months, and limited LLC campaign contributions. In effect, the New York election systems were given a decades-overdue overhaul. It couldn’t have come soon enough.

The year before, in 2018, New York’s byzantine system was on full display. The primary elections for state and federal offices were scheduled on two separate days—making New York the only state in the nation to follow such a calendar. The state also didn’t have an early voting program in place, one of just a dozen states on that list, leading to monstrous lines on Election Day. There were also widespread reports of broken voting machines, further extending the process for voters. The same was true for the 2016 elections.

This had become the norm for New Yorkers, a necessary evil that voters in the city had to learn to live with and navigate around, lest they forgo their participation. Prior to the election of President Trump in 2016, it was difficult to imagine the electoral calculus in the state Assembly changing in a drastic enough manner to result in the updates.