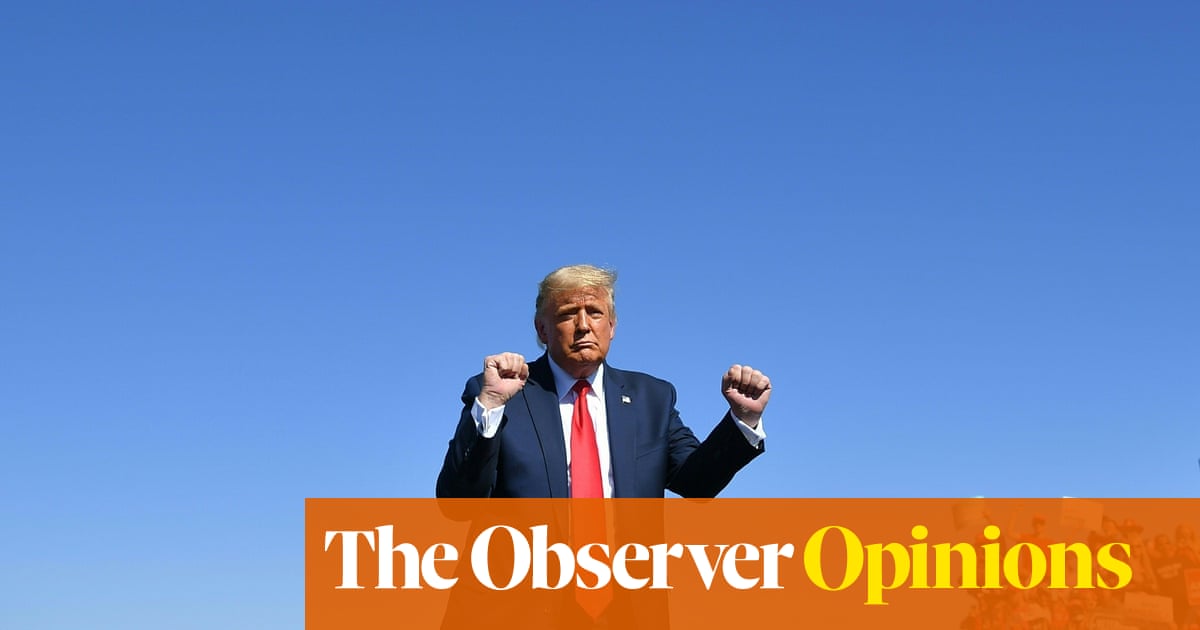 We have heard lectures on why radical rightwing movements win for what feels like an age. A more pressing subject gains less attention. Like catching a glimpse of the path from a dangerous mountain when the mist parts, we can begin to see how they may lose.

When liberals treat their enemies as evil geniuses, they bestow a backhanded compliment. They imply that, however wicked it may be, the right has a supernatural power to manipulate the electorate and rig the system. Donald Trump is many things, but he’s no genius, evil or otherwise. If Trump were a beggar screaming at passersby on a Washington sidewalk, rather than a billionaire in the White House, we would have no difficulty in saying he was mentally ill. I accept Boris Johnson has the superficial charm and rat-like cunning of the journalist-conman. But if he were a political mastermind, he would never have confirmed the deep suspicion of northern voters that southern snobs view them with contempt.

One day, their obituaries may record that Trump and Johnson destroyed the base of their support without realising they were doing it; that they no more understood the forces that brought them to power than plastic sheeting blowing down a street understands the wind.

Age does not bring wisdom and before it is anything else Trump and Johnson’s base is old. Sixty per cent of voters over 65 supported Leave in the 2016 Brexit referendum. American pensioners preferred Trump over Hillary Clinton 53%-45% in the 2016 presidential election. You don’t need me to tell you that Covid-19 targets the old. And you don’t need to be a genius to know that politicians shouldn’t give their supporters the impression they are happy to see them die. Trump’s failure to get a grip on the pandemic and the Republican party’s dismissal of basic health protections gives exactly that impression. Joe Biden can now tell old, white voters, whose backing Trump could once have counted on: “You’re expendable, you’re forgettable, you’re virtually nobody. That’s how he sees seniors. That’s how he sees you.”

US polls bear out the staggering political insight that voters don’t want to die by showing that Biden has taken a substantial lead among pensioners. Far from making the clever choice and downplaying an issue that only harms him, Trump reveals his compulsive narcissism by refusing to let Covid-19 go. Moving on to talk about, say, the economy would entail accepting that he was in the wrong about the pandemic. Rather than bite his tongue, last week he was ridiculing the head of the National Institute of Allergies and Infectious Diseases, whom Trump loathes for the childish reason that Americans trust his medical advice more than they trust Trump.

Perhaps you have to be from the north of England to understand the suicidal politics of behaving as if the south can humiliate the north. I moved away from Manchester in the 1980s and even I found myself overcome by volcanic rage as ministers issued ultimatums that Manchester must accept the government’s miserly Covid-19 relief or pay the price. Johnson’s behaviour is incomprehensible because he knows the power of northern resentment. Since the Brexit referendum, the right has spun the story that elitist Remainers, lounging in their Islington ivory towers, had the nerve to denounce honest northerners as “thick” for backing Leave. The opinion pages of the Daily Telegraph have been filled with little else these past four years.

Exploiting anti-metropolitan feeling helped the Conservatives win. Now northern Labour politicians can turn the years of physical and economic suffering that coronavirus will bring into the story of how Westminster’s Tory elite refused to treat the north with common decency. The Manchester Evening News’s Jennifer Williams wrote of her incredulity that, as reports of Tories refusing the support the north needed cut through to such an extent that pubs were offering free pints to Andy Burnham, not a single cabinet minister visited Manchester to make the government’s case. Perhaps it isn’t such a puzzle. This government hates and wants to crush anyone who argues back: judges, broadcasters, civil servants, regional mayors. When the mayor of Greater Manchester stood up for his region, the right’s hatred of a rival source of power blinded it to the danger of confirming every northern suspicion about the south.

A deterministic explanation of contemporary society has taken a deep hold. The corruption and incompetence of governments do not matter, we are told. The material reality of whether you have a job or are unemployed, whether you expect to live or die, no longer determines how you vote. If you went to university, you back the left. If you didn’t, you back the right. Or so the story goes. Johnson can break his promises about Brexit bringing a new dawn. Trump can break his promises about fighting for working-class Americans. It doesn’t matter. Trump’s boast that he could “stand in the middle of Fifth Avenue and shoot somebody and I wouldn’t lose voters” encapsulates our age.

If Trump wins, the cultural determinists will be vindicated. If he does not, however, the reasons for his defeat won’t be a mystery. Astonished US journalists won’t be wondering how to explain it. They will know that, far from helping him, Trump’s vicious culture war politics alienated white women, who came to find him repulsive, and his mishandling of the Covid-19 crisis alienated elderly people and many others besides.

Northern Labour politicians I speak to still believe that Corbyn and the far left gifted the Conservatives another 10 years in 2019. But even they are wavering now and, like lost walkers when the mist parts on the fells, are catching the faintest glimpse of a way through the murk.