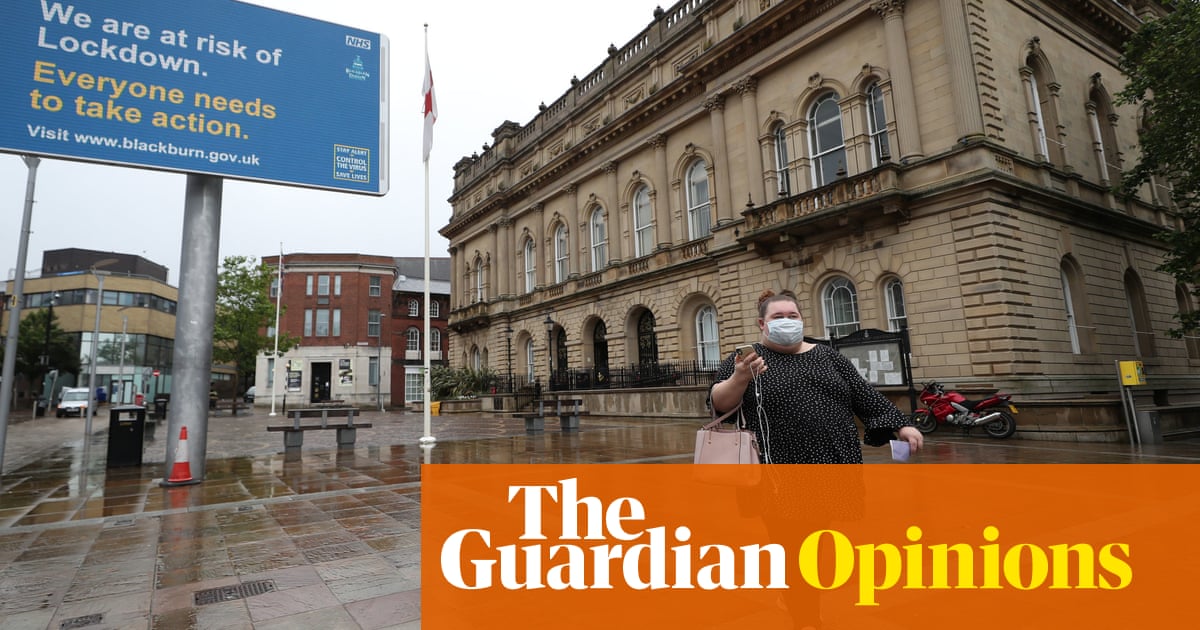 On 21 September, Sage issued urgent advice to the government. It was unequivocal. It recommended the immediate introduction of a “circuit breaker” (a short period of lockdown), warning that “not acting now to reduce cases will result in a very large epidemic with catastrophic consequences in terms of direct Covid-related deaths and the ability of health services to meet needs”.

As with the first, the burden of a second wave would fall disproportionately on the frailest in society, but also on those with lower incomes and Bame communities.

The advice was not taken, the science not followed, and the north is facing the tragically predictable outcomes. On the same day as the Sage report was announced, data reviewed by the local authority public health team showed that Blackburn with Darwen borough had 51 Covid cases, meaning a case rate of 110.8 per 100,000 and a positivity rate of 5.8%.

Local authority analysis showed East Lancashire Hospitals Trust had 16 in-patients and the borough had the 11th highest case rate in England. By Friday 16 October, Blackburn with Darwen had a confirmed case rate of 445 per 100,000, and a positivity rate of 13.3% and the surrounding area of Lancashire went into tier 3. According to local public health data the hospital had 120 Covid in-patients, with Bame residents disproportionately affected.

This all could have been avoided if the national test-and-trace system was able to contact more than just over 50% of local cases. It also only managed to identify an average of about three close contacts per case. A large number of residents were not directly contacted and will not subsequently have self-isolated. This will have contributed very significantly to rising rates over the summer. By late July, in response to rising rates and concern from national government, Blackburn with Darwen brought in a rapidly escalating range of local control measures. As cases reached a rate of 60 per 100,000 by mid-August eight out of our 17 wards were in an almost total social lockdown.

The borough locked down earlier and at a lower case rate than the rest of the UK, and this has had a disproportionate economic impact on the area. Two weeks after the first special control measures came into place, footfall was reported as down 15% in the town centre, despite none of the control measures restricting town centre trading. Other data confirms the unequal impacts in the wider Lancashire area as universal credit counts rose rapidly this year.

Analysis by The Health Foundation concludes that “those living in the nation’s most deprived areas, who already had poorer health, are now at risk of worsened long-term health outcomes and intense financial hardship as a result of the pandemic”. The higher infection rates are also compounding educational inequality. Children in the north are experiencing an increasing number of Covid-related school absences, exacerbating existing educational disadvantage.

The north is not short of entrepreneurial spirit or skills, as is demonstrated by Blackburn’s Issa brothers recently taking over Asda, but it is short of its fair share of government investment. Northern towns are also among those UK areas most at risk from a no-deal exit from the EU.

When a ship is going down, what matters most is not how much of the bow is under water, but how fast it is sinking. The latest data from Cambridge University suggests that the R rate across the country is rising fast. The south east region has the same R rate as the north west, at R=1.48. London is not far behind at R=1.37.

This indicates that a national circuit breaker lockdown is both necessary and inevitable, but many fear it may only be triggered when London gets to the same confirmed case rate risk level as the north. By that time, the region will have more deaths, a longer trajectory to exit, higher economic costs, higher unemployment and greater educational disadvantage. To recover, the north is going to require levelling up of investment, not just rhetoric.