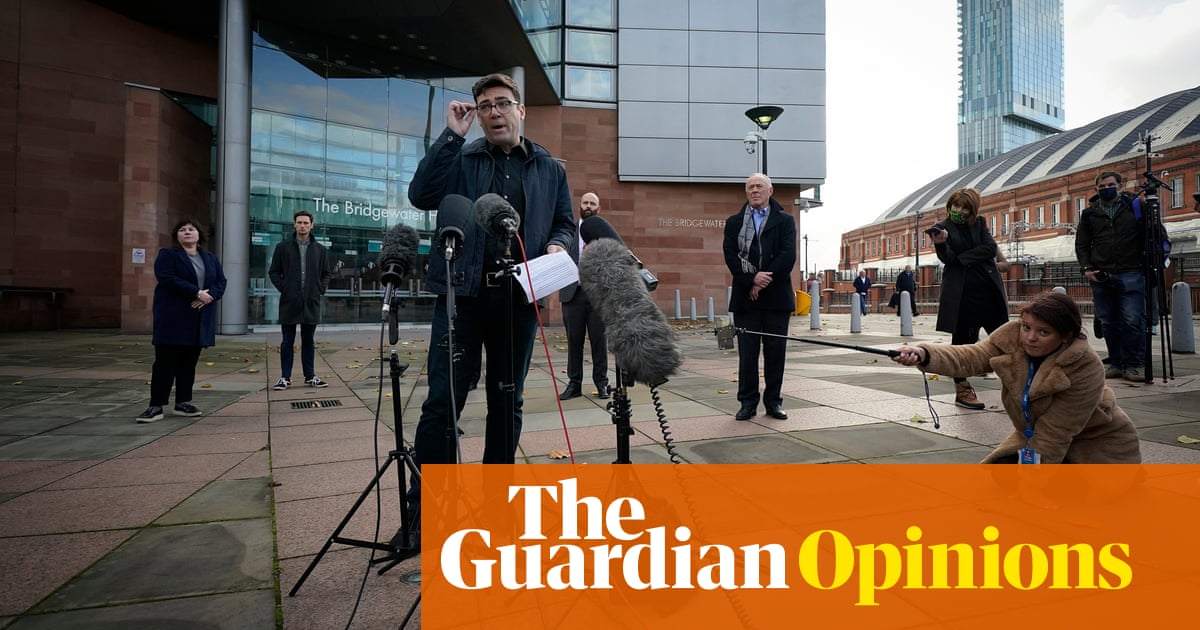 Five million pounds. A huge amount of money. But, in the national scheme of things, £5m is tiny. It amounts to an almost infinitesimal 0.0005% of what the British government budgeted to spend during the current financial year. Spread among the 2.8 million inhabitants of Greater Manchester, £5m works out at £1.78 per head, less than the price of a one-day off-peak travelcard on the city’s trams.

Yet by refusing to come up with this £5m on Tuesday, Boris Johnson’s government finds itself in a state of political warfare with Manchester. More, it stands accused of abandoning a city that has been the cornerstone of Conservative efforts to rebuild the party’s credibility in northern England. Above all, it faces charges that, in their hour of need, it turned its back on the northern voters upon whom Johnson’s party depends. As recent political follies go, this is among the worst – and there is already a bulging shortlist for that award.

All this could easily have been avoided, and it is important to try to understand why it was not. On the face of it, both the Johnson government in London and the local authority chiefs, headed by Greater Manchester’s mayor, Andy Burnham, wanted almost exactly the same thing: tighter public health restrictions in the face of rising Covid cases, combined with preventing, where possible, a second shutdown of the local economy. They also wanted to protect local hospitals and to keep schools and universities functioning. And they recognised the need for extra financial support to ease the pain.

What remained was therefore to agree the details and the price, just as had happened in other parts of the north in the preceding days. Granted, that would not have been a gimme, because Greater Manchester is so big and influential that any deal Burnham secured would soon become the gold standard across the whole UK, including for those areas with inferior deals already in place. Granted also, there was probably no way – short of an improbable national U-turn – in which Burnham could have forced Johnson and the chancellor, Rishi Sunak, to extend the full furlough scheme for the duration.

Nevertheless, that left plenty of room to agree forms of special funding support, such as a free school meals package, for example. The gap between the two was not immense. Johnson was offering £60m. Burnham wanted £90m, but came down to £75m. Later, he reduced that still further, to £65m. That’s hardly a confrontational approach. Given the shared interests and some shared will, a deal could surely have been struck. Yet Johnson did not budge. The £5m stayed in his pocket. The talks broke down.

Why did Johnson do this? From the government’s own point of view it appears counterintuitive. Johnson has staked his premiership on holding on to former Labour voters in the north. Yet these “identity conservative” voters – as they are dubbed by Maria Sobolewska and Robert Ford in Brexitland, their defining new bookof changing British voting patterns – are often in the frontline of the Covid crisis. Johnson ought to have hugged their interests close, if only for reasons of political self-interest. Tory MPs in the north-west, led by the backbench 1922 committee chair, Graham Brady, were urging him to do so. Instead, Johnson’s actions re-empower Burnham, and through him the Labour party, to speak for the very voters on whom the post-Brexit Tory party depends.

The episode has wider lessons, too, of which the most immediate are the defects it exposes in Johnson’s tiered local Covid restriction strategy. But the most striking lesson is that Johnson lacks, and indeed spurns, what were seen for generations as indispensable political skills, especially in a prime minister. Johnson talks a lot about bringing the country together as one nation. Yet it turns out that he is no good at negotiating with that nation – or with any other. He doesn’t know when or even how to compromise. He seems incapable of making concessions in pursuit of agreements and then sticking by them. His version of coming together involves no serious acknowledgment or concession to other interests. It simply means accepting his terms and allowing him to do things his way.

Johnson’s Manchester debacle is an exemplary illustration of the wider failing. For this is how he operates. The failure over Manchester has coincided, most catastrophically of all, with his continuing refusal to get any kind of a grip on the Brexit withdrawal talks with the European Union. This caused disbelief among business leaders when he gave them 15 minutes of his time this week. The failure also comes against the backdrop of an equally abject inability to negotiate the kind of post-Brexit trade arrangements for Britain that he has promised since 2016. And it is all of a piece with the negligent inability to engage seriously with Ireland, north and south, with Scotland or with Wales. We can now add northern England to that list.

No other prime minister of modern or not-so-modern times would have taken this insouciant and slovenly approach to such a serious matter. From David Lloyd George in the 1920s to Theresa May in the 2010s, prime ministers of all stripes have mostly taken negotiations seriously. They haven’t always been very good at it, it hasn’t always worked, and there are one or two obvious exceptions, such as Margaret Thatcher – though in Arthur Scargill she was faced with a much more ruthless opponent than Burnham. Nevertheless, trying to find workable solutions to serious and divisive national problems with people who you did not agree with went with the job of being prime minister – from Stanley Baldwin during the general strike to Gordon Brown during the financial crisis. Not any more.

What makes this change possible? Part of the problem lies with an electoral system that delivers parliamentary majorities to parties with only a minority of electoral support (Johnson got 44% of the vote in 2019 but 56% of the seats). This perpetuates the familiar and damaging winner-takes-all approach, in which other interests are largely ignored.

But the larger reason is the dynamic change so carefully mapped by Sobolewska and Ford in their book. The Brexit vote and the 2019 election result have given Johnson an identity-based mandate of a new but less flexible kind. It cannot be compromised. Johnson and his advisers see those who voted remain in 2016, or for opposition parties in 2019, as illegitimate in a way that is implacably different from how Harold Macmillan or Tony Blair saw their own defeated opponents.

In this new, Brexit-defined politics, no compromise – or, more precisely, no appearance of compromise – can be allowed, whether with Keir Starmer, Michel Barnier, the career civil service, Nicola Sturgeon and Mark Drakeford or, now, with Andy Burnham. In Johnson’s world, Brexit has not just conferred the old majority of power but a new monopoly. Johnson may call it a local and regional approach, but in reality it is a centralist take-it-or-leave-it. That’s not just offensive: it’s also a mistake. It will be his undoing.