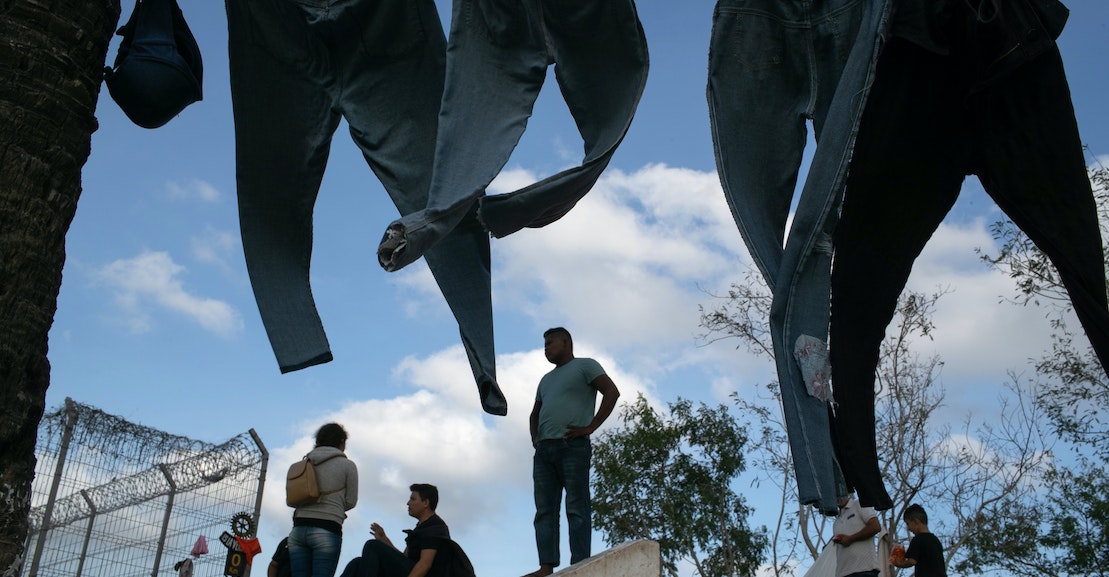 It’s been nearly a year now that Luis Adrian Martinez Reyes has lived in a tent with his wife (who is pregnant), child, and godchild in the migrant camp for asylum-seekers in Matamoros, Mexico, on the banks of the Rio Grande, which marks the U.S.-Mexico border. Camp residents are mostly like him: young parents with children. They cook on small clay stoves with wood provided by aid groups that also deliver three meals a day, along with supplies including masks, sanitizer, and baby items. People use portable toilets, wash their hands in small sinks, and bathe in the muddy river. It’s a life of waiting, the view of the opposite riverbank a constant reminder that the United States is out of reach.

I met Reyes in the camp in March, before the border closed, and we’ve stayed in touch on WhatsApp. He fled Honduras, which has one of the highest murder rates in the world, in 2019, after surviving a shooting that left him with a long red scar running vertically along his torso. He paid smugglers to take him and his family across the Rio Grande on an inflatable boat no larger than a mattress, but Border Patrol caught and detained them briefly before deporting them to Matamoros in December. There, they waited in Mexico under a Trump administration policy known as the Migrant Protection Protocols. It’s also called, perhaps more descriptively, the “Remain in Mexico” policy. Since Vice President Mike Pence ordered the Centers for Disease Control and Prevention to close U.S. borders amid the Covid-19 crisis, against the objection of agency officials, Reyes and others in the camp have waited for months as their asylum hearings have been pushed back again and again. His court appearance is now scheduled for December 7.

According to immigration lawyers who visited the camp, the number of people living there has shrunk from about 2,500 before the border closed to about 1,000, as people give up on asylum and return home, or find work and settle in Mexico. Those going home are returning to the violence, political persecution, and economic hardships they fled in the first place. They’re returning out of desperation. Others, like Reyes, choose to stay, hoping the border will reopen. “Right now, many dead migrants are appearing in the river,” Reyes said in Spanish. In one case, a Guatemalan man drowned while trying to help a pregnant woman who was crossing the river to reach the U.S.

They left dangerous situations in their home countries to seek safety in the U.S., and now they don’t know if or when they will have their asylum cases heard. Under the MPP, which will see its second anniversary in January, the U.S. has issued deportation orders for nearly 33,000 people, and another 23,000 cases are pending.

“Here we are all asking God for Biden to win.”

Immigration is not a major election issue in 2020 the way it was in 2016. While the spotlight has moved on for some voters, the outcome in November will have a profound impact on the lives of people living in the Matamoros camp—Biden and Trump have dramatically different plans for immigration: Trump would continue MPP, while Biden has pledged to take immediate action to end the policy. If Biden wins, immigration lawyers say he could quickly restore the border to the pre-Trump status quo using memos, executive orders, and settlement agreements.