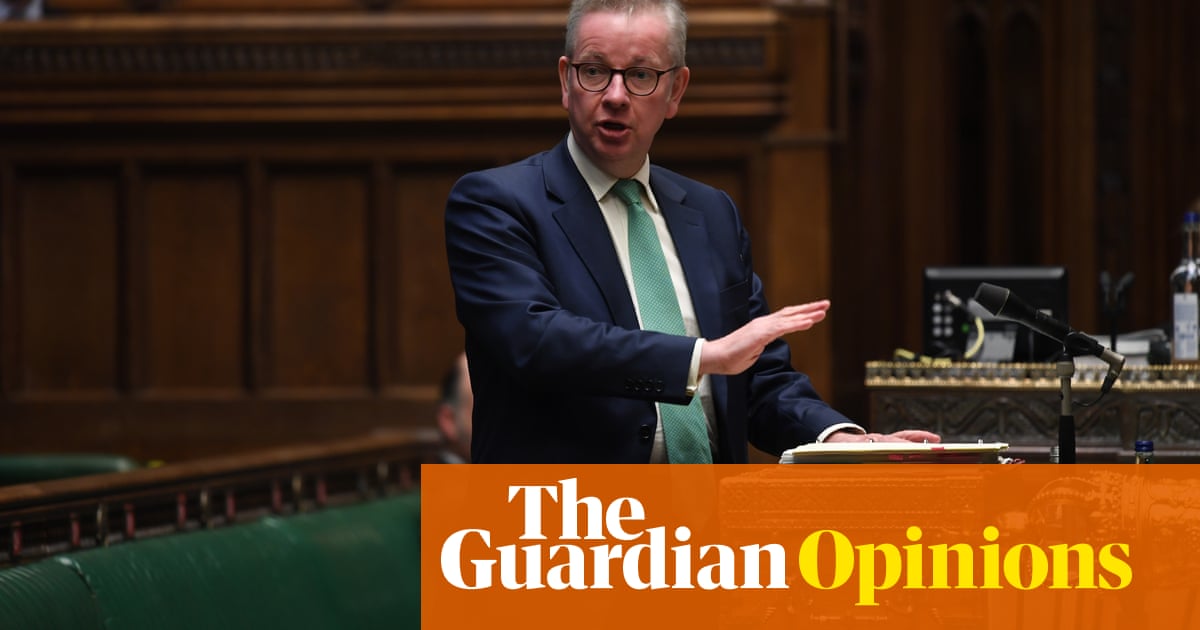 It made a change to have a break from the horrors of the coronavirus. Even if it was for only an hour. The downside was that we got the horrors of Michael Gove giving a Commons statement on Brexit instead. And like almost all of the chancellor of the duchy of Lancaster’s performances, it was conducted entirely without sincerity.

At least with Boris Johnson you get the feeling that his past is catching up with him and his untruths are beginning to take their toll on his physical and mental wellbeing. Gove appears to have no vestigial sense of shame. Politics for him is just a theatre in which truth and lies are interchangeable, and he retains an outward appearance where excessive politeness is merely a front for outright contempt. He is the original tabula rasa: every day – or even several times a day – he is the chameleon that reinterprets himself according to his surroundings. His mistakes are not merely forgiven, they are erased from memory.

Gove began with a rehash of the prime minister’s Brexit summary of last Friday. The EU had shown bad faith by not devoting all its spare time to engaging with Boris’s three missed deadlines to achieve a deal before the end of the year – apparently they selfishly wanted one day off a week to get on with other business, such as managing a global pandemic – and so unless Michel Barnier agreed to everything we wanted, we were inexorably heading for no deal.

Or an “Australian-style” deal, as he called it. Mikey has yet to realise that even the Aussies want more than the deal currently on offer with the EU. But have no fear. “I am not blithe or blase,” he said. Sometimes, a politician’s lack of self-awareness is breathtaking. According to the Govester, 10 weeks was more than enough time for all those businesses that were hopelessly unprepared for a no-deal Brexit to put in place all the systems they needed should the all too thinkable become a reality.

In her reply, Labour’s Rachel Reeves openly mocked Gove for his shamelessness. Johnson’s promise that he had “an oven-ready” deal. Mikey’s own insistence from four years ago that a deal between the EU and the UK would be “the easiest in human history” and that “the UK held all the cards”. It was just unfortunate they were are all twos and threes. But Gove looked confused. None of this computed. Because in Mikey-world none of this had happened, despite the video evidence.

Now was the time to stop posturing. If anyone was guilty of bad faith, it was the UK for planning to break international law and renege on the withdrawal agreement we had signed less than 10 months previously. A no-deal Brexit would mean 10% tariffs on UK cars and 40% tariffs on lamb. Was that what the government wanted? And talk of no-deal preparations was just delusional as most businesses didn’t have a clue what it was exactly they were meant to be preparing for.

Even Theresa May couldn’t resist putting the boot in as she highlighted the dangers no deal posed to policing and national security. Now the Govester just blatantly started lying, insisting we couldn’t sign up to the European court of justice under any circumstances and that we were probably better off not relying on European crime agencies. May looked suitably bewildered and exclaimed: “W-h-a-a-a-t?” She must be bitterly regretting ever having said a no deal was better a bad deal. Because even she can now see it really isn’t.

Next to embarrass himself was Iain Duncan Smith, who despite having recently admitted that no one had ever understood what they were voting for in the withdrawal deal, was adamant that the deal was perfectly clear and that it was time for the EU to start negotiating in good faith. Fortunately for IDS, before anyone had time to pick the bones out of his latest piece of self-inflicted idiocy, Gove received the bombshell news that everything he had said up till now was complete doggybollox and that the EU was now prepared to negotiate the legal texts. It was as if Mikey had spent the first 30 minutes acting Julius Caesar and during the interval had switched to The Comedy of Errors.

Since all politics is merely theatre for Gove, he managed the transition seamlessly. No one could be more thrilled than him that the EU had seen sense, and he was looking forward to them caving in to all our demands on fishing quotas, state aid and a level playing field. But he hoped they were serious this time. Again, the lack of self-awareness was rank. But the Tory Philip Hollobone – what has Kettering ever done to deserve a dimmer MP? – took him seriously and demanded that the Royal Navy be on hand to blow any French fishing boats out of the water. The Govester humoured him by promising lethal force.

Thereafter, the session rather petered out. Several opposition MPs wanted to know how Farage’s Garages – the lorry parks in Kent now cluttered with bottles of urine as there are no toilets – along with the recruitment of the 50,000 new customs officials that would be required, were coming along. Mikey just blanked those questions. He wasn’t here to talk to problems, he was here to sound vaguely threatening to Johnny Foreigner. The whole play had merely been a charade. A piece of posturing.

Because everyone knew how the comedy would end. The UK could not afford a no deal on top of the economic damage of the coronavirus pandemic. So the EU would give a little and the UK would give a lot and some sort of deal that Boris had always insisted he could never agree to would be negotiated. And the Govester would be first on his feet in the Commons to declare the deal that was noticeably worse than had been on offer under the Maybot a government triumph. What’s more, he might even believe it.