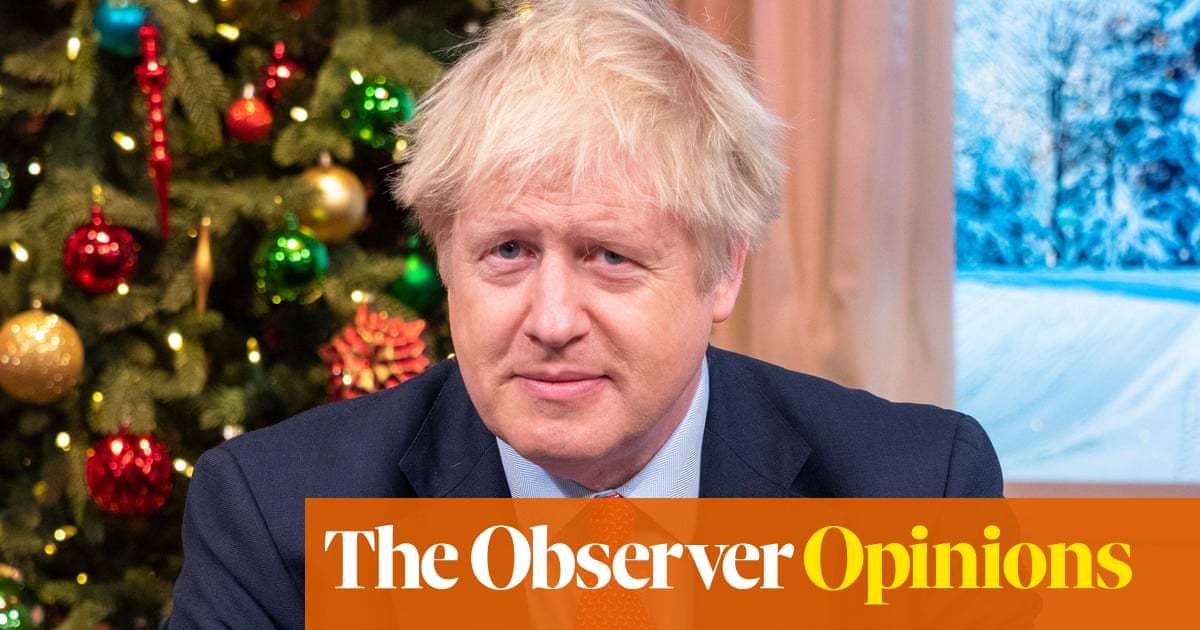 ’Twas the night before Christmas, the cruellest in years,

No Mustique for Boris, just nappies and tiers.

No quaffing, no shagging, even Cummings had gone,

Only wails broke the silence – what would Churchill have done?

A stern voice from the darkness – “now, out of that bed”,

Unlikely as it might seem, Christmas really is a big deal for families man Boris Johnson, for whom saving it from Covid very early became a public theme.

Was anyone else already thinking of Christmas when, long before the mince pie taste tests and Ocado delivery slots, the prime minister first invited the public to adopt it – rather than, say, visits to the sick and confined, or live performance, or even economic security – as a beacon of national revival?

It was his “strong and sincere hope”, he volunteered in July that, thanks to whatever plan prevailed at the time, a “significant return to normality” might happen from “November, at the earliest, possibly in time for Christmas”. You could identify this sentimentality, like his occasional catchphrase “put our arms around people”, as a characteristically clueless attempt to pass as human, were it not that pre-pandemic Johnson already considered himself a lovable Christmas fixture. Last December, after re-enacting a scene from Love Actually, he took a Christmassy moment – “Hi folks” – before quitting his UK grotto for a Caribbean break donated by a favourite entrepreneur, to remind us that Christmas is “first and foremost a celebration of the birth of Jesus Christ”.

So a deep spiritual attachment to what he called “that special time of year” could explain why now, even as his own incompetence still makes any plans for elaborate celebrations pointless or irresponsible, Johnson is still dreaming of a “normal” Christmas and urging a nation that has long needed little encouragement to seasonally over-invest to fantasise likewise. Naturally, he adds the Santa-like proviso that if we end up with nothing it’s because we haven’t been good. As in, compliant with his long-forgotten “package of measures”. Still, generously last week: “We’ll do our absolute best to try to make sure we can get life back to as close to normal as possible for Christmas.”

True, it’s not clear what sort of Christmas is meant by Johnson’s “normal”. It might mean taking just the one girlfriend – “buy yourself something nice” – on a round trip to Mustique. Though in Andrew Gimson’s 2006 biography, there are signs that Johnson, when suddenly in the news over an affair with an earlier staffer, favoured a traditional Dickensian show, featuring several known dependents. “Put on a good Christmas and it’ll all be all right,” he advised.

More recently, there are hints – witness his repeated in-law jokes – that this pious man really craves something more pared down. In Tom Bower’s biography, we find Johnson excusing himself from a Christmas do for some quiet time with Jennifer Arcuri.

As for civilians, it is clear to his government that high on our list of priorities is “saving” Christmas for students. Although sublimely unconcerned, earlier, by glaring A-level injustices, then the risks of pouring undergraduates into accommodation where they would pay handsomely to be infected and imprisoned, the government now pledges to do whatever it takes to save both students’ fees and students’ Christmas. And maybe this plan really will transform Gavin Williamson into a triumphant combination of Churchill, thinking of children in 1941, Aslan in The Lion, the Witch and the Wardrobe, the reformed Scrooge, Pa in The Long Winter, Enid in Jonathan Franzen’s The Corrections and Ratty, saving Christmas for Mole and his tiny friends: “Some eight or ten little field-mice stood in a semicircle, red worsted comforters round their throats, their fore-paws thrust deep into their pockets, their feet jigging for warmth.”

Maybe, unnoticed by the nation’s puritans, the custom of getting students home, while Silent Night swells in the background, just in time for them and their older relations to drive one another mad with seasonal irritation and competing dietary and entertainment needs, really has become a tradition as precious as Pret’s seasonal sandwich. On the other hand, Jo Grady, general secretary of the University and College Union, representing university staff, has already questioned the government’s “perverse obsession” with Christmas to the extent (after it urged Eid celebrants to manage expectations) that the proposed future lockdown coincides with Hanukkah.

After all his known delusions about the British appetite for risk, Johnson’s belief that the public values Christmas celebrations over life itself suggests that he continues to attribute to everyone else a version of his own, idiot bravado. Which is not to devalue support from his team of festive goblins. Had even one member of the all-male gangs currently overseeing national ruin ever planned and executed a Christmas gathering – or even read one of the many heartfelt features about the pressure and labour involved – they might have advised that reduced, pandemic-era festivities might be a reset courageously endured by millions of women (actually, had a single such woman replaced Johnson, Christmas might now be possible).

The sacrifice might be equally tolerable to the growing multitude of lonely, suffering or destitute people whose unhappiness at “normal” Christmas is also regularly recorded, before traditionally being forgotten in time for the John Lewis ad. Even individuals imbued by a lifetime of family customs and cultural myths, by books, food, carols, commercials and films, with infinitely ambitious Christmas expectations, might be most comforted this holiday by the miracle of keeping a job, the sight of a relative or, as Marcus Rashford has attempted unsuccessfully to tell the government, getting enough to eat.

Admittedly, Johnson, the dolt of Christmas present, has so far been rewarded with more headlines about “saving” Christmas than calculations about a related surge in infections, supposing Covid can’t be talked into the required ceasefire and football match. It’s beginning to look a lot like carnage.

•Catherine Bennett is an Observer columnist