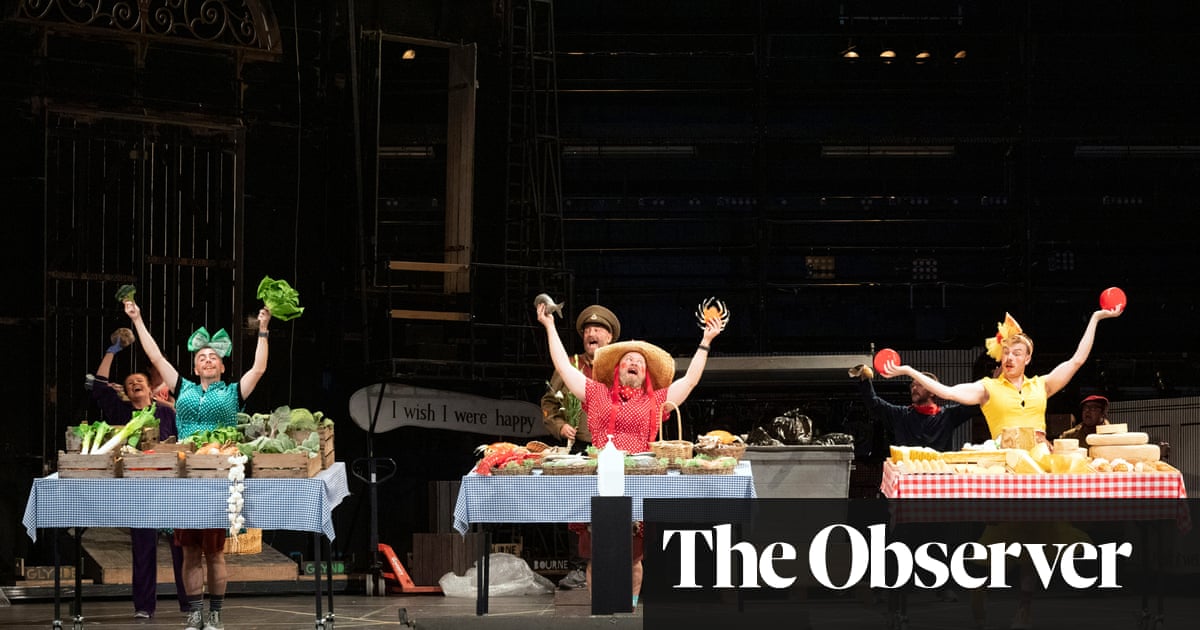 Mirth being the great healer, no joke of the mask-gloves-sanitiser variety was left unturned in Glyndebourne’s staging of Offenbach’s comedy, Mesdames de la Halle. Wittily reworked by Stephen Plaice and renamed In the Market for Love, Stephen Langridge’s deft production was seen, by a few, outside in Glyndebourne’s gardens in the summer. With essentially the same cast, this one-act “bouffe” has returned for a brief autumn season, winning a chuckling reception from a socially distanced audience happy to be back inside the theatre, hearing an ensemble of voices on stage and the 18-strong Glyndebourne Tour Orchestra in the pit.

No greater care could have been taken, artistically under the baton of conductor Ben Glassberg or in terms of protecting everyone involved for the 75-minute show. It’s the silliest of stories: three lusty women (sung by three lusty men) are being courted by the whiskery drum-major, Raflafla, but their eyes are on the hot young chef Harry (sung by a woman) who already has a girlfriend, the orphan Ciboulette (sung by a woman). Gags are tautly handled, with barely time to turn stale. The designs are a flotsam-jetsam jumble with plenty of fruit and veg, and bright clothes, to create a lively mood. The Police Inspector (bass Matthew Rose, amusing in his pompous sobriety) blows his whistle at any sign of up-too-close transgression. Touch is avoided by a repertoire of clever routines – a false, extending hand; much play with long vegetables; a trio of beadles in high-vis jackets. All culminates in a mutual foot-waggling session by the young lovers in place of a happy-ending kiss.

Offenbach wrote many of these small-scale ‘bouffes’. Executed as well as this they earn their right to be restored to the repertoire

Offenbach wrote many of these small-scale, melody-crammed bouffes. Executed as well as this, with an excellent chorus of a dozen and a spirited cast, they earn their right to be restored to the repertoire. Harry, sung by the versatile mezzo-soprano Kate Lindsey, and Ciboulette, played by fast-rising soprano Nardus Williams (seen last month as Mimi in ENO’s drive-in La Bohème), shone as the romantic leads. Brenden Gunnell, Rupert Charlesworth and Michael Wallace exuded pneumatic, muscular charm as the market women, Mesdames Bouillabaisse, Beurrefondu and Mangetout. Jeffrey Lloyd-Roberts was properly oily as the self-regarding Raflafla. Tickets are still available: if you can, go. Next up at Glyndebourne: a 90-minute semi-staged version of Mozart’s The Magic Flute from 1 November.

After these hard months, we should not be flabbergasted or even surprised at the pluck shown by smaller organisations determined to survive and flourish. The annual Oxford lieder festival has mounted a busy week of talks and recitals with no audiences and a variety of payment options to watch online, involving more than 100 musicians and speakers. This year’s capacious theme is “Connections across time: a brief history of song”. The festival’s admirably detailed programme notes and song texts are available as usual. It’s all easy to access and navigate, and well filmed. Emerging artists are given prominence alongside stars such as Sarah Connolly and Ian Bostridge, and one of the festival’s own former young artists now making strides, bass-baritone Michael Mofidian. Connolly’s heartfelt concert of Schumann and Mahler, with pianist Eugene Asti, warmly demonstrated her joy at being back on the platform. Bostridge, and pianist Julius Drake, explored the raw torments of Schubert, especially devastating in Sei mir gegrüsst (I greet you). They also performed two songs, eerie and haunting, from the remarkable cycle of Arabian poems set by Hans Werner Henze in 1997 for Bostridge (Sechs Gesänge aus dem Arabischen).

Silver linings, crass to point out, are in short supply. One stole in this week in the form of Wexford Festival Opera, online via rte.ie/culture. Each autumn, I regret not making it to the Irish harbour town, with its splendid opera house and impressive traditions. The chance to sample its Shakespeare-themed 69th season, called the Festival in the Air, has been a boon. I loved the spirited invention of the new Wexford Factory – a professional development academy for young Irish singers – whose Falstaff Chronicles is an ingenious digest of Verdi’s final opera. Under the musical direction of Carmen Santoro, it’s in six parts, each 15 minutes: the right length, expertly sung, updated, youthful and funny. Exactly the tonic we need and free to all. The festival ends on Sunday 18 October, “live” from the stage of Wexford’s National Opera House with a concert given by Irish soprano Claudia Boyle and Sicilian tenor Pietro Adaini with the Wexford Festival Orchestra conducted by Francesco Cilluffo.