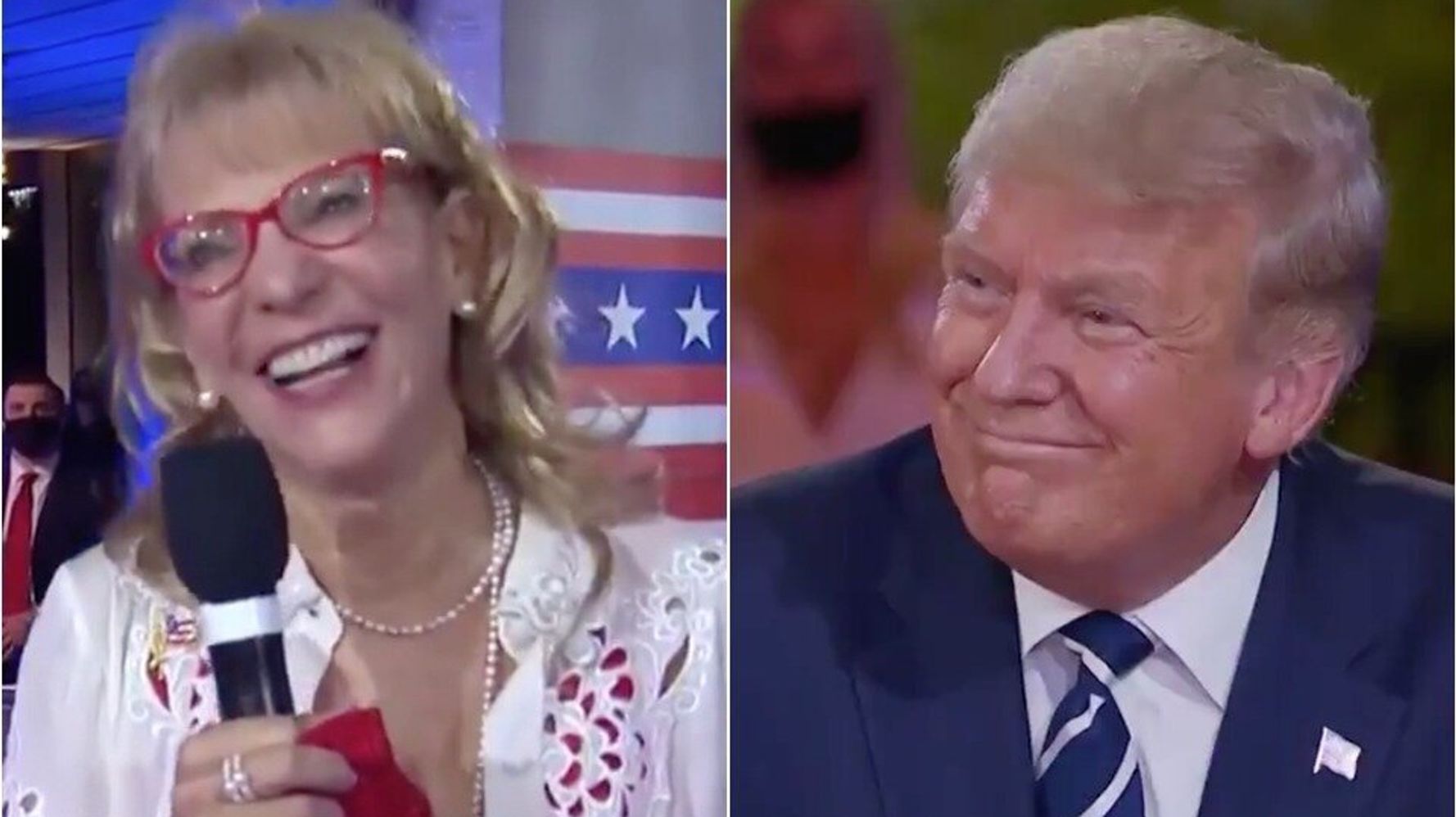 A woman who addressed President Donald Trump during Thursday’s town hall by first complimenting him on his smile wants it to be clear that she is no fan of the man behind the grin, and actually plans on voting for Democratic nominee Joe Biden.

Paulette Dale, who was identified last night as a registered Republican voter who voted for Hilary Clinton in 2016 and is leaning toward Biden, was present at the town hall to ask Trump if he would continue cutting support for the Deferred Action for Childhood Arrivals (DACA) policy, which grants undocumented immigrants who were brought into the United States as children eligibility to remain.

Before asking the question, however, she exclaimed that the president had a “great smile.”

“You’re so handsome when you smile,” Dale said as Trump thanked her and ate up the praise, eliciting applause from the audience.

Voter to President Trump at #TrumpTownHall: “You’re so handsome when you smile.” pic.twitter.com/KgJThAtAQg

Dale’s rapport with Trump immediately drew reactions on social media, with some commentators rolling their eyes and others, like actress Bette Midler, quipping that Dale needed better vision care.

Tonight a woman in the audience of Trump’s town hall began her question by telling him he has a great smile & he’s so handsome when he smiles. And when #JoeBiden is President, hopefully that woman will be able to access better vision care, bless her heart.

In a surprise turn of events, however, Dale — a retired Miami Dade College professor — told the Miami New Times she’ll still be casting her vote for Biden, despite being pleased with Trump’s answer that his administration was “working very hard on the DACA program.”

“I wish [Trump] would smile more and talk less,” Dale said, adding that the president “steps in it every time he opens his mouth.”

Dale, who also had a question about Trump’s skepticism toward climate change that she was unable to ask at the town hall, said that Trump was “very combative and he doesn’t believe in science.”

Dale was sincere about the president’s looks though: “I believe the man has a very nice smile; there was no reason not to comment on it. Smiles are important to me. I like nice teeth.”

Twitter immediately reacted to news of this plot twist, pointing out that Dale’s praise of the president’s smile was ironically similar to the way that many men in power — including Trump himself — focus on women’s appearances rather than their ideas.

I may be an outlier here, but I loved Paulette Dale’s flattering Trump. It’s brilliant, really. Her remark that he should “smile more, and talk less” is spot on. How many times have women heard that? She treated Trump like Trump treats women. Good for her.

The woman at the town hall who told Trump he should smile more then grilled him on DACA is far more subversive than anything that’s appeared on Saturday Night Live.

I will not hear a word against national treasure Paulette Dale who told the president he’d be much prettier if he smiled more and tried to be a little less shrill https://t.co/GSxO4uFq23

This has to be an amazing troll, right? It’s a deliberate parody of all the “smile more” discourse directed towards female politicians. https://t.co/eT4mOkNOWq