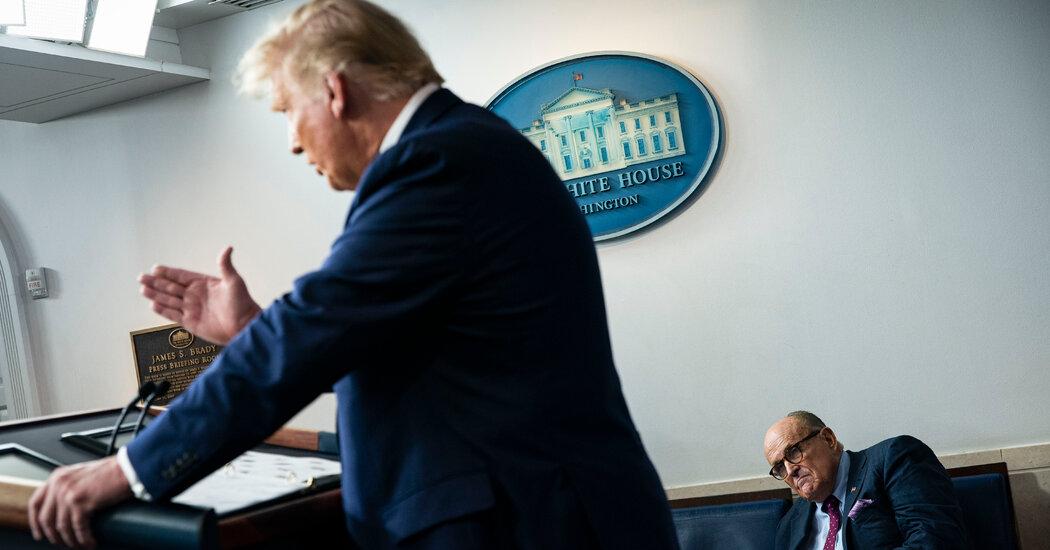 The agencies imparted the warning months before disclosing publicly in August that Moscow was trying to interfere in the election by taking aim at Mr. Biden’s campaign, the officials said. Mr. Trump and Mr. Giuliani have promoted unsubstantiated claims about Mr. Biden that have aligned with Russian disinformation efforts, and Mr. Giuliani has met with a Ukrainian lawmaker whom American officials believe is a Russian agent.

Robert C. O’Brien, the national security adviser, presented the warning about Mr. Giuliani to Mr. Trump in December. Two former officials gave conflicting accounts about its nature. One said the report was presented to Mr. Trump as unverified and vague, but another said the intelligence agencies had developed solid and credible information that Mr. Giuliani was being “worked over” by Russian operatives.

Mr. Trump shrugged it off, officials said, but the first former official cautioned that his reaction could have been colored in part by other information given to him not long before that appeared to back some of Mr. Giuliani’s claims about Ukraine. The specifics of that material were unclear.

Mr. Giuliani did not return requests for comment. The Washington Post reported the intelligence agencies’ warning to the White House earlier on Thursday.

The warning, the second former official said, was prompted by a meeting on Dec. 5 between Mr. Giuliani and Andriy Derkach, a Ukrainian member of Parliament who takes pro-Kremlin positions. The Treasury Department recently labeled him “an active Russian agent for over a decade,” disclosing that he maintained ties to Moscow’s intelligence services as it imposed sanctions on him in September.

Mr. Giuliani’s campaign to undermine Mr. Biden has focused on his anticorruption efforts in Ukraine while he was vice president and his son Hunter Biden’s work there on the board of a gas company owned by an oligarch widely seen as corrupt.

Mr. Derkach has been releasing tapes of the former vice president’s conversations with Ukrainian officials. American officials said those tapes had been edited in misleading ways.

Mr. Giuliani has made multiple trips to Ukraine to gather material that is damaging to the Biden campaign, and his December visit came as he tried to shift the political conversation from impeachment proceedings against Mr. Trump to unsubstantiated claims about Mr. Biden’s wrongdoing.

He later hosted Mr. Derkach on his podcast and has repeatedly highlighted the Ukrainian’s claims against the Biden family.

Mr. Giuliani has accused the Bidens of protecting Burisma, the energy company where Hunter Biden was a board member. Those allegations are mostly baseless. While vice president, Mr. Biden took actions to fight corruption that Burisma would not have welcomed, Democrats have said.

Intelligence officials delivered a classified report to top Trump advisers late last year that included information related to Mr. Giuliani and disinformation efforts, according to a former administration official. Another official said Mr. Trump was involved in at least a casual discussion about those efforts.

But at the time, advisers were urging Mr. Trump to keep his distance from Mr. Giuliani amid the House impeachment inquiry. Mr. Giuliani had helped prompt the inquiry because of his push to undermine Mr. Biden and became a key figure in it. He expressed anger that he was tarnished during the impeachment inquiry, people briefed on conversations with him said, and has been seeking ever since to prove he was right about Mr. Biden.

Mr. Giuliani’s work seized attention in the presidential race again this week when The New York Post published articles about Mr. Biden and his son based on material Mr. Giuliani provided. The Biden campaign rejected the reports, and Facebook and Twitter deemed them so dubious that they limited access to them.

The New York Times has not been able to verify the information that Mr. Giuliani furnished to The Post, which he said came from a laptop left at a Delaware repair shop. The owner of the shop has given conflicting accounts to reporters, and Mr. Giuliani’s acquisition of the laptop has raised questions about the material on it.

Some former officials who have not reviewed the material suspect it could be Russian disinformation and noted Mr. Giuliani’s work with Mr. Derkach.

The intelligence warning to Mr. Trump in December had nothing to do with the laptop, a former official said.

Intelligence officials have issued a series of warnings about Mr. Derkach and other Ukrainians they believe are being used to spread disinformation, either directly by Russian intelligence or by oligarchs friendly to Moscow.

It has been known for months that Russian intelligence was using allies in Ukraine to spread disinformation and purported damaging material about Mr. Biden. Intelligence officials have warned Republicans in Congress that some of the people they were seeking information from were conduits for Russian disinformation.

But raising any issue related to Russian interference with the president is a challenge for the intelligence community. Mr. Trump, who views such intelligence as an attempt to undermine his legitimacy, has questioned it, and raising the issue will often derail his regular intelligence briefings by an analyst, so it has fallen to Mr. O’Brien to brief him on such matters, current and former officials have said.

In August, the Office of the Director of National intelligence said in a statement that Mr. Derkach was spreading disinformation about Mr. Biden. The C.I.A. later issued a more detailed classified warning in its Worldwide Intelligence Review, a secret document read by members of Congress and the administration.

Mr. Giuliani was dealing with people widely believed to be at worst Russian operatives and at best conduits for Kremlin disinformation efforts, said current and former officials.

“Giuliani has made no secret he has met with people the intelligence community has identified as Russian operatives,” said Amos Hochstein, a former aide to Mr. Biden who served on the board of Ukraine’s gas company, Naftogaz. “It is widely known throughout Ukraine if you want to peddle any kind of information damaging to Vice President Biden, there is a receptive audience in Giuliani.”

Intelligence officials have asserted that Russia favors Mr. Trump’s re-election, and the Kremlin has allies among Ukraine’s own oligarchs, who believe Mr. Biden will fight corruption there more aggressively than the Trump administration has.

“There is a meeting of interests between what Giuliani wants to do and the notorious corrupt oligarchs in Ukraine,” Mr. Hochstein said. “The Ukrainian oligarchs are afraid the Joe Biden presidency returns the anti-corruption focus and the focus on good governance. They don’t want that. They know there is a market with Rudy Giuliani for information, real or fake, that is damaging to the vice president.”