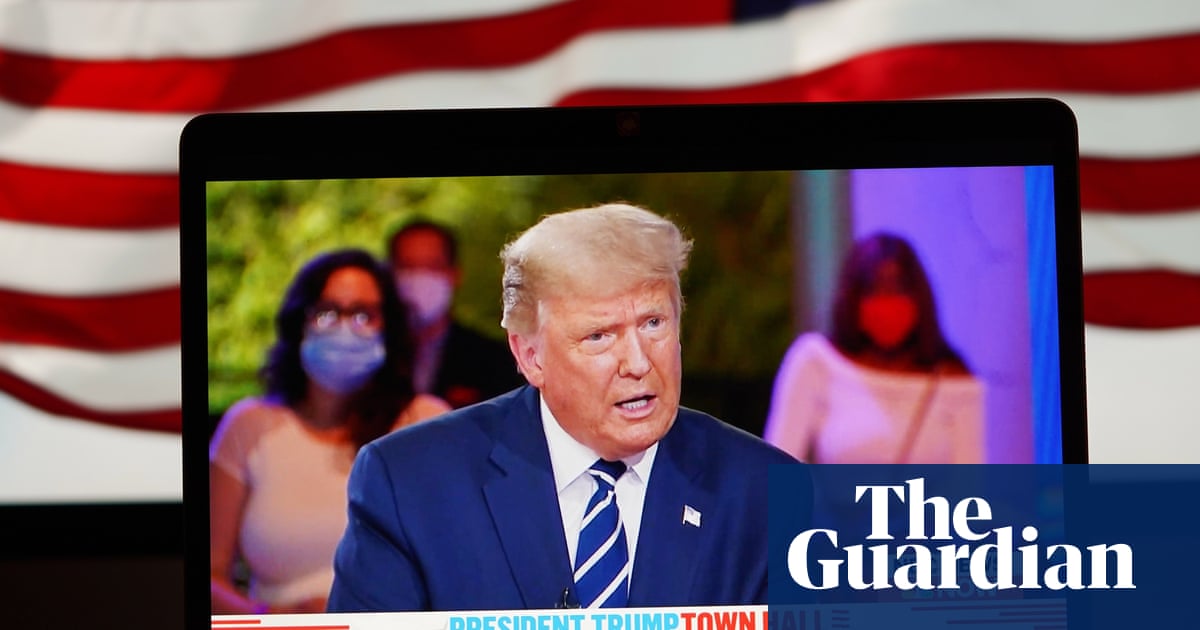 Joe Biden beat Donald Trump in their TV ratings battle from their duelling town hall events, figures showed Friday, while the president faced condemnation over his failure to disavow the QAnon conspiracy theory.

Biden, the Democratic challenger, attracted almost 1 million more viewers, according to Nielsen, even though Trump’s event was shown on more channels.

The figures from the TV events late on Thursday will probably enrage the ratings-obsessed president, who told aides he hoped to beat Biden and then use the numbers to humiliate him.

QAnon’s followers believe that Trump is trying to save the world from a cabal of satanic paedophiles that includes Democratic politicians and Hollywood celebrities. It has been linked to several violent acts since 2018 including at least one alleged murder.

The US president has praised QAnon adherents including a congressional candidate. At a televised “town hall” on Thursday, he repeatedly claimed to be ignorant of the movement, considered by the FBI as a potential domestic terror threat.

Guthrie forcefully interjected: “You do know!”

There was a widespread backlash. Ben Collins, a journalist at NBC News, tweeted: “Outside of a straight up endorsement, this is about as about as close to a dream scenario for QAnon followers as is humanly possible.”

The fresh controversy came as millions of people vote early, ahead of the 3 November presidential election, and the coronavirus surges again with 38 states reporting rising cases.

Trump and Biden held simultaneous town halls with voters on rival TV networks in lieu of their second presidential debate, cancelled after the president contracted the coronavirus and refused to debate virtually. Although both candidates are white men in their 70s, it proved to be a split screen for the ages, radically divergent in both style and substance.

Speaking in Philadelphia, Biden offered long, detailed answers and promised to follow the science in combating the pandemic. “The words of a president matter,” he told host George Stephanopoulos on ABC. “No matter whether they’re good, bad or indifferent, they matter. When a president doesn’t wear a mask, or makes fun of folks like me when I was wearing a mask for a long time, then people say it mustn’t be that important.”

But the sober policy discussion on ABC was often overshadowed by Trump’s characteristically vague answers to questions that no other American president in modern times would even be asked.

He became visibly agitated when pressed by Guthrie on his views on white supremacy and his retweeting of a conspiracy theory that Osama bin Laden might still be alive. And pushed on whether he owes money to any foreign bank or entity, Trump replied: “I will let you know who – who I owe whatever small amount of money.

Much criticised for his handling of the Covid-19 pandemic, Trump claimed: “What we’ve done has been amazing, and we have done an amazing job, and it’s rounding the corner.” But more than 63,500 new cases were reported in the US on Thursday, the highest number since July.

Trump also misrepresented a recent study to make the false claim that 85% of the people that wear masks catch the virus. “That’s what I heard and that’s what I saw.”

Biden holds a commanding lead over Trump in opinion polls and fundraising. Trump’s campaign, along with the Republican National Committee and related groups, raised $247.8m in September, well short of the $383m raised by Biden and the Democratic National Committee in the same period.

Recovered from the virus, Trump has entered a frenzied spell of campaign rallies in critical swing states but continues to show little message discipline. On Thursday he renewed his attacks against Gretchen Whitmer, branding the Democratic Michigan governor a “dictator” even as authorities announced charges against a 14th suspect in a plot to kidnap her.

Whitmer responded on Twitter: “One week after a plot to kidnap and murder me was revealed, the president renewed his attacks. Words matter. I am asking people of goodwill on both sides of the aisle – please, lower the heat of this dangerous rhetoric.”

Democrats are taking nothing for granted, however, following Trump’s stunning upset victory over Hillary Clinton in 2016.

John Zogby, a Democratic author and pollster, said: “I think Trump is in bad shape. It’s very hard to see a path to victory. But as I say those words. I recall hearing them and maybe even saying them exactly four years ago. I’m not ready to subscribe to the landslide yet.”

Wall Street is preparing for a likely Biden victory, however. Shares of the gun makers Smith & Wesson and Sturm Ruger have both rallied around 8% since late September. Experts predict a surge of gun sales if Democrats win control of the Senate from Republicans, giving them majorities in both houses of Congress and making it easier to approve gun control legislation.