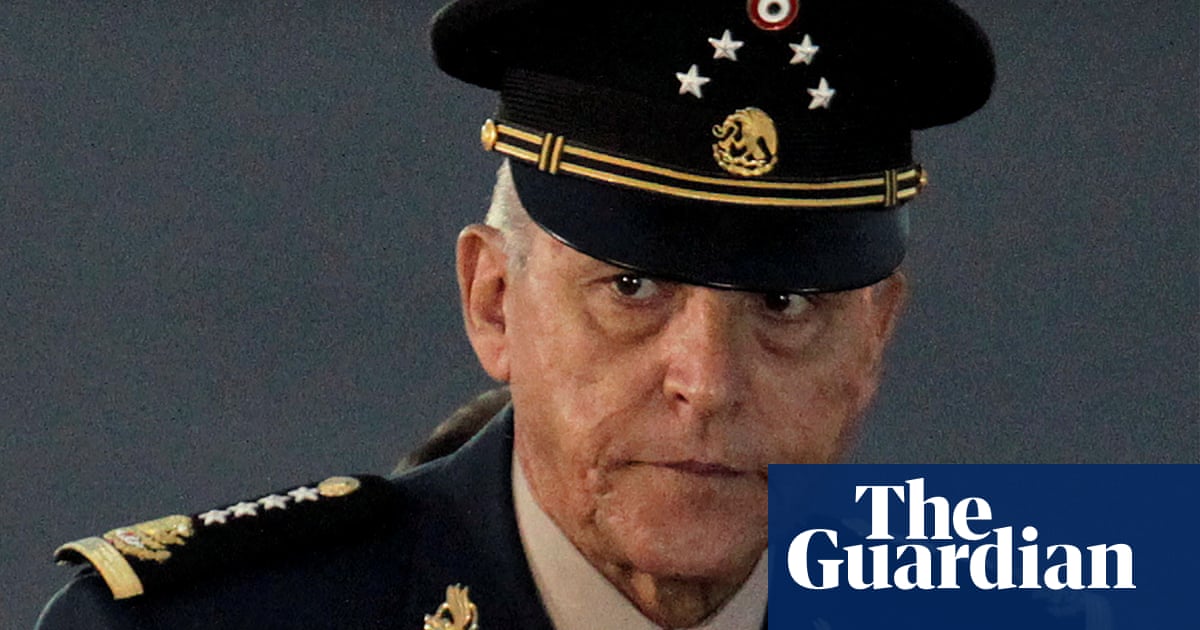 Mexico’s former defence secretary has been arrested in Los Angeles on charges of drug trafficking and money laundering, becoming the latest in a string of senior officials accused of collaborating with the very criminal groups they were supposed to be confronting.

Gen Salvador Cienfuegos was detained at Los Angeles international airport late on Thursday, and is expected to appear in court on Friday afternoon, according to the foreign secretary, Marcelo Ebrard.

Cienfuegos was Mexico’s top military official during the 2012-2018 presidency of Enrique Peña Nieto, and played a key role in the militarized “war on drugs”.

The country’s current leader, Andrés Manuel López Obrador, seized on the arrest as confirmation of his narrative that preceding administrations were rife with corruption.

“This is an unmistakable example of the decomposition of the government, of how civil service was degrading, the government service during the neoliberal period,” López Obrador said on Friday.

But the president, who has kept the armed forces at the centre of his strategy against organized crime, was quick to assert that the current crop of military leaders are “incorruptible”.

Cienfuegos, 72, is the second former Mexican cabinet official arrested in the US on drug charges in the past year. Genaro García Luna – the former public security secretary during the 2006-12 administration of Felipe Calderón – was arrested in Texas last year and faces accusations of allowing cocaine shipments to head to the United States. He faces trial in New York.

Two of his top lieutenants in the federal police, Luis Cárdenas Palomino and Ramón Pequeño, were also indicted in New York on accusations they permitted the “Sinaloa Cartel to operate with impunity in Mexico … in exchange for multimillion-dollar bribes.”

Cienfuegos was charged with money laundering and conspiracy to distribute drugs in the United States between Dec 2015 and Jan 2017, according to an indictment by prosecutors the Eastern District of in New York. The indictment says Cienfuegos was identified by the aliases including “El Padrino” and alleged he allowed the violent H-2 cartel to “operate with impunity” in exchange for bribe payments.

In Mexico, Cienfuegos was notorious for repeatedly refusing to allow investigators to interview soldiers in the city of Iguala about their activities on the night in September 2014 when 43 teachers trainees were abducted and presumably murdered.

Cienfuegos also defended soldiers accused of massacring civilians in the town of Tlatlaya.

Despite repeated accusations that troops have been involved in human rights abuses and drug trafficking, they remain largely untouchable by civilian justice, said Falko Ernst, senior Mexico analyst for the International Crisis Group.

“There is no transparency. The armed forces remain black boxes that continue to successfully defend themselves against independent oversight,” he said.

Generations of the Mexican military have been implicated in drug violence: the country’s first anti-drug czar Gen Jesús Gutiérrez Rebollo was arrested in the late 1990s and convicted of taking bribes from drug cartels.

One of the most bloodthirsty factions in the drug war, the Zetas cartel, was formed by former special forces members.

But the armed forces remain one of the country’s most trusted institutions, “despite their known issues with corruption and human rights abuses”, said Rodolfo Soriano-Núñez, a sociologist in Mexico City.

Amlo came to power promising to return troops to the barracks, but has increasingly relied on the military. His proncipal anti-crime policy has been the creation of a militarized “national guard” mostly composed of former soldiers. The force will be under military command until 2024, despite previous promises that it would be run by civilians.

Troops have also been used for a range of non-military programmes, from managing the country’s customs service to building a new airport in Mexico City.

The president has put little priority on improving police forces, which “leaves him no one else to lean on except for the armed forces”, said Jorge Medellín, a journalist covering Mexican military matters.