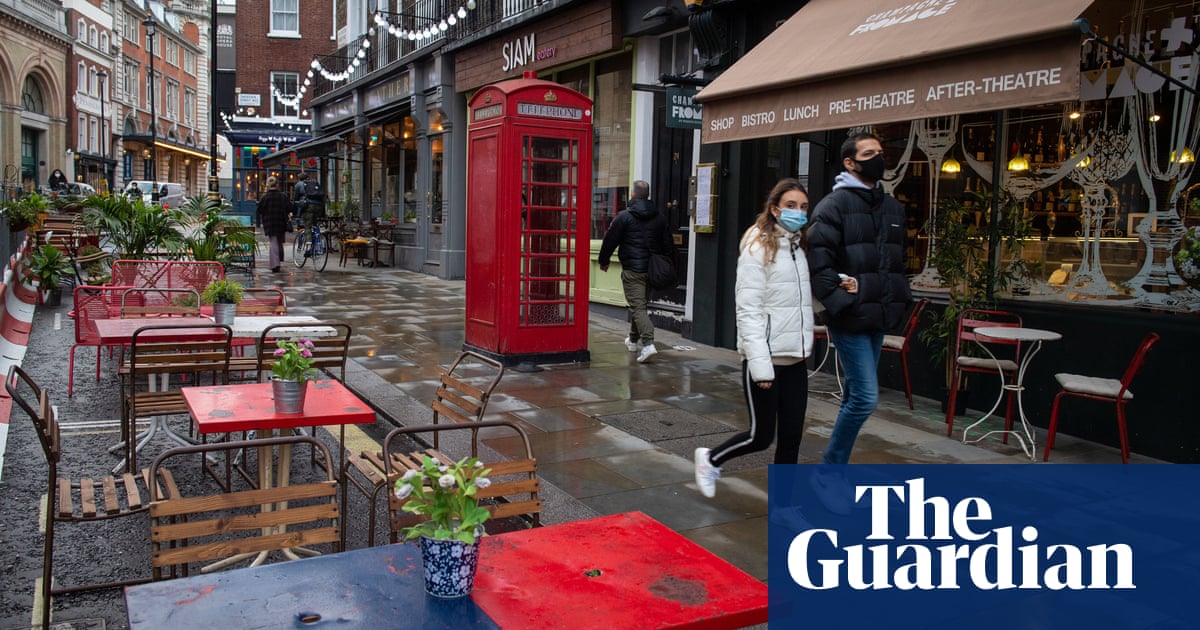 New lockdown restrictions to be imposed across much of England from Saturday could be the “death knell” for many pubs and restaurants, the government has been told, as business groups voiced concerns about of a wave of job losses within weeks.

London, Essex, York and parts of Derbyshire are among the regions that will be subject to tougher, tier 2 curbs, meaning people from multiple households will not be allowed to mix in venues such as pubs, restaurants and bars.

Almost a third of restaurants (8,468) and more than one in seven pubs (5,000-plus) in England will be affected by the measures announced on Thursday, according to the real estate adviser Altus Group.

Robert Hayton, an Altus executive, said: “Further restrictive measures that adversely impacts trade, already at far lower levels than before the pandemic, without any discerning targeted support, could be the death knell.”

The hospitality trade has already suffered a plunge in sales after the introduction of restrictions including the 10pm curfew and the “rule of six” , which have led to a reduction in footfall in town and city centres. Pubs and bars that serve little or no food have suffered the most because they have not benefited from the “eat out to help out” scheme or a temporary VAT cut on food.

The head of the trade body UKHospitalitysaid the new measures were the “worst of both worlds” because they would damage trade but did not come without with the same financial support available to firms in areas designated tier 3, where pubs and bars must close unless they serve substantial meals.

The organisation fears London venues will be particularly badly affected because they are already reeling from the loss of trade from tourists and office workers.

“A move into tier 2 will now be catastrophic for some of them and it is only going to be made worse by the end of the furlough scheme in under two weeks,” said Kate Nicholls, the head of UKHospitality.

Hospitality bosses have previously warned that 300,000 jobs could be lost without a sector-specific bailout.

Nicholls called on the government to provide a financial safety net by allowing hospitality firms to waive contributions to Chancellor Rishi Sunak’s jobs support scheme – which requires companies to pay 55% of an employee’s monthly wages – or by giving them the same support available to firms in tier 3 regions, which includes covering two-thirds of the pay for workers in companies forced to close by the restrictions.

“If it [the government] does not, we are looking at catastrophic businesses closures and widespread job losses in the capital as early as 1 November,” she said.

The chief executive of the British Beer & Pubs Association (BBPA), Emma McClarkin, called on the government to “do the right thing” by announcing a targeted financial support package, warning that permanent closures would be unavoidable without it.

With London braced for local restrictions akin to those already imposed on vast swathes of England, groups focused on the capital’s prosperity urged the government to ensure the measures could be lifted as soon as possible.

“If tough action now means we can save lives and avoid a more severe lockdown later, then businesses in the capital will hope that these short-term measures will prevent worse to come,” said Jasmine Whitbread, chief executive of London First.

“Transparency over how any measures are expected to reduce transmission and when they will be lifted as rates fall will be crucial for building confidence. The government must not repeat the mistakes of the summer and must use this time to fix the track and trace system and put in further support for those businesses unable to trade, including extending business rate and VAT reliefs.”

The Confederation of British Industry – the UK’s largest business lobby group – called the imposition of tier 2 measures in London a “severe setback” and urged the government and London Mayor Sadiq Khan to use all tools at their disposal to protect jobs.

While businesses affected by tier 2 restrictions are not eligible for extra support, those hit by the highest tier 3 curbs can get £3,000 a week cash grants and an increased contribution from the state as part of Sunak’s job support scheme.

The London Chamber of Commerce said many businesses in the capital would prefer to be subject to tougher restrictions if it meant they could access that support.