Note: Be careful with diffusion indexes. This shows a rebound off the bottom – some improvement from May to October – but doesn’t show the level of activity.

Manufacturing activity in the region picked up this month, according to firms responding to the October Manufacturing Business Outlook Survey. The survey’s current indicators for general activity, new orders, and shipments all showed notable improvement. Most future indexes increased and continue to reflect optimism among firms about growth over the next six months.

The diffusion index for current activity increased 17 points to 32.3 in October, its fifth consecutive positive reading after reaching long-term lows in April and May … On balance, the firms reported increases in manufacturing employment for the fourth consecutive month. The current employment index, however, fell 3 points to 12.7 this month​.
emphasis added

This was above the consensus forecast.

Business activity expanded modestly in New York State, according to firms responding to the October 2020 Empire State Manufacturing Survey. The headline general business conditions index fell seven points to 10.5, pointing to a slower pace of growth than in September.
…
The index for number of employees moved up five points to 7.2, indicating that employment levels grew. The average workweek index rose nine points to 16.1, a multi-year high, signaling a significant increase in hours worked.
emphasis added

This was below the consensus forecast.

Here is a graph comparing the regional Fed surveys and the ISM manufacturing index: 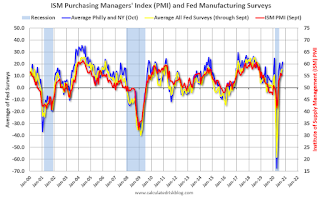 These early reports are mixed, and suggest the ISM manufacturing index might increase slightly in October from the September level.