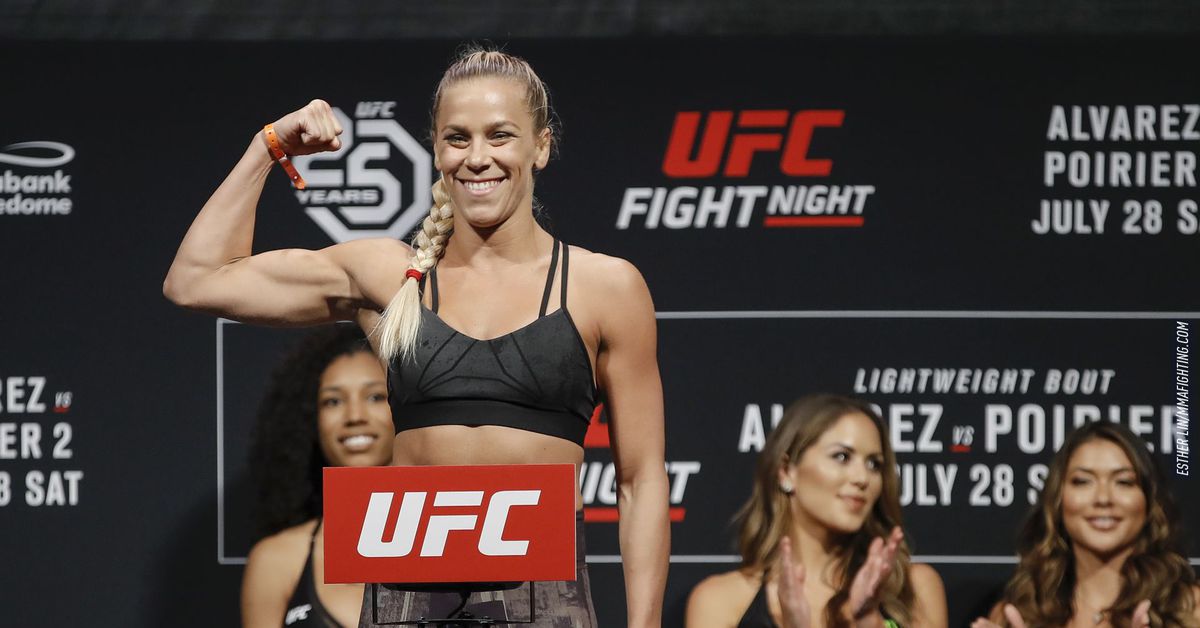 Katlyn Chookagian is excited to start a family with her husband, but that doesn’t mean her fight career is coming to an end any time soon.

Rumors recently swirled that the one-time flyweight title challenger is potentially considering retirement in the near future as she turns her attention away from fighting and toward motherhood.

It turns out Chookagian is definitely excited to begin a family of her own. But she’s not done with fighting just yet or contemplating hanging up her gloves after her next fight.

“I’ve been very honest with how I feel about what I see in my life in the future, and I think sometimes people take that out of context and say, ‘Oh she’s over it, she wants to have kids,’” Chookagian said during UFC Fight Island 6 media day. “No, I’m just saying what I see in the future and what I want after fighting. I think that’s a smart thing to look past it cause there is a huge part of my life that is going to happen when the fighting chapter closes.

“I’ve said before I’m taking it at this point, trying to get as many fights as I can. I’m getting older so if I could fight every month then that’s perfect fight now. I said I’m taking one fight at a time and I think people took that out of context and said this is my last fight and it’s definitely not.”

Chookagian is scheduled to meet former strawweight champion Jessica Andrade this weekend as the Brazilian moves to 125 pounds for the first time in the UFC.

It’s a pivotal matchup in the division as reigning champion Valentina Shevchenko prepares for her next bout against Jennifer Maia at UFC 255 in November.

While there will come a day when Chookagian retires, she’s not setting a time limit on how much longer she has in the sport.

“I’m saying I’m taking it one fight at a time where I’m focused on this fight and that’s where my focus is,” she explained. “Then after that when I have time off, then you address what’s next in your life.

“For anyone that thinks that I’m halfway out or unmotivated, they clearly don’t know me. If I wasn’t motivated, I wouldn’t be doing this. I definitely don’t need to do this. I’m doing this because I want to and it’s a huge passion of mine.”

After coming up short in her bid to become champion with a loss to Shevchenko earlier this year, Chookagian knows her road back to the title won’t be easy. That said, she is still ranked No. 1 in the flyweight division, which means the path for anybody else hoping to challenge Shevchenko will likely go through her.

“I think that my whole career, even before the UFC, my goal was to be a UFC champion,” Chookagian said. “I got to the title, I fell short, so now it’s kind of like a weird transition in my career. Like OK now what? I’ve never just fought for money. I always fought for the title shot. I’m realistic. I know if Andrade gets the win, she’s probably getting a title shot. If I get the win, I’m probably not getting a title shot. Just because there’s plenty of other girls in the division.

“With that being said, I just feel I’m getting so much better in the gym, so it’s motivating for me. If I felt like I was plateauing and I would just be fighting for money, that’s definitely still a motivating factor. I feel like I’m still getting better, so I’m still learning things. I’m still eager to be able to do them in the octagon on fight day. I think that’s kind of motivating me.”

Because Chookagian remains a tough challenge for anyone in the world at 125 pounds, she knows the UFC might have a difficult time booking her for adequate fights given her position in the division.

It’s part of the reason why Chookagian is resolute to face whoever the UFC puts in front of her right now, and with enough wins, she can’t be denied another shot at gold.

“I think for the matchmakers I’m kind of annoying in the division because it’s hard to promote another fight when I just lost with Valentina,” Chookagian said. “But if they put any new contenders against me, I’m most likely going to beat them or I’ve already beaten them. So I think for right now, I’m just taking whatever fights they give me.