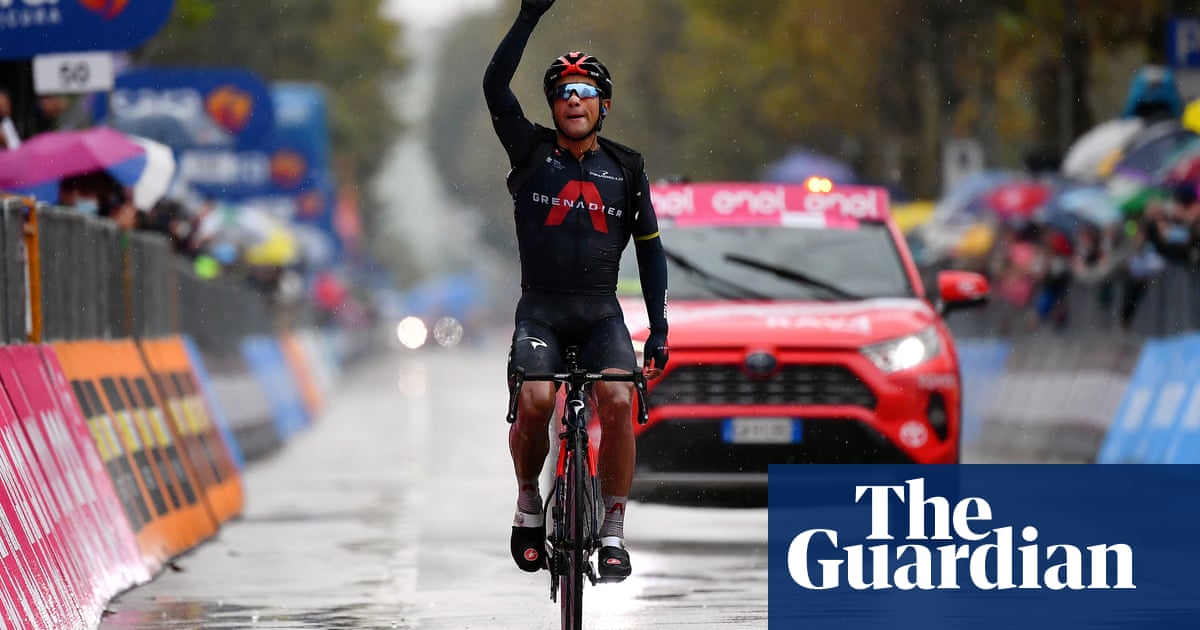 Jhonatan Narváez of Ineos Grenadiers soloed to victory on stage 12 of the Giro d’Italia but concerns over the security of the race’s coronavirus bubble overshadowed the day.

Narváez capitalised on a cruelly timed mechanical problem for Bahrain-McLaren’s Mark Padun to deliver a third stage victory for Ineos, and the biggest win of the 23-year-old Ecuadorian’s career.

The 204km stage that started and finished in Cesenatico was designed as a celebration of Marco Pantani, but cold and damp weather around Il Pirata’s old home town did little to raise spirits after riders spoke out in the morning.

Two days after the Mitchelton-Scott and Jumbo-Visma teams withdrew from the race because of positive tests for coronavirus, further concerns led Lotto-Soudal’s Thomas De Gendt to tell the Belgian broadcaster Sporza before the start of the stage that he was unsure if the race should go ahead.

“I don’t feel like riding today,” the 33-year-old De Gendt said. “The situation is headed in the wrong direction and it seems that the organisers are hiding things. The riders are discussing whether we should start the stage.”

His comments came after reports that 17 police officers on the race had tested positive, though a police statement distributed by organisers RCS Sport said the individuals concerned had been working on the Giro-E, a support race.

The statement from RCS said that race has “completely separate” organisation, hotels and logistics, though there have been reports that some teams have found themselves sharing accommodation with those involved in the Giro-E event. The statement added: “As for the escort policemen on the Giro d’Italia, who follow autonomous prophylaxis dynamics, the recent Covid tests carried out have all returned negative responses.”

Out on the roads, the day was defined by a 14-man breakaway which went up the road and quickly established a commanding lead. As it splintered over the day’s five categorised climbs Narváez and Padun went clear, but a broken front wheel for Padun with 24km left the Ukrainian trying to close a 28-second deficit. He fought back to within 9sec as Narváez nervously looked over his shoulder, but the gap began to grow again in the last 10km.

The overall contenders marked one another behind with a reduced bunch crossing the line a little over eight minutes after Narváez to keep João Almeida in the pink jersey for another day, with his 30sec lead over Wilco Kelderman intact. Domenico Pozzovivo and Vincenzo Nibali remain fourth and fifth respectively.