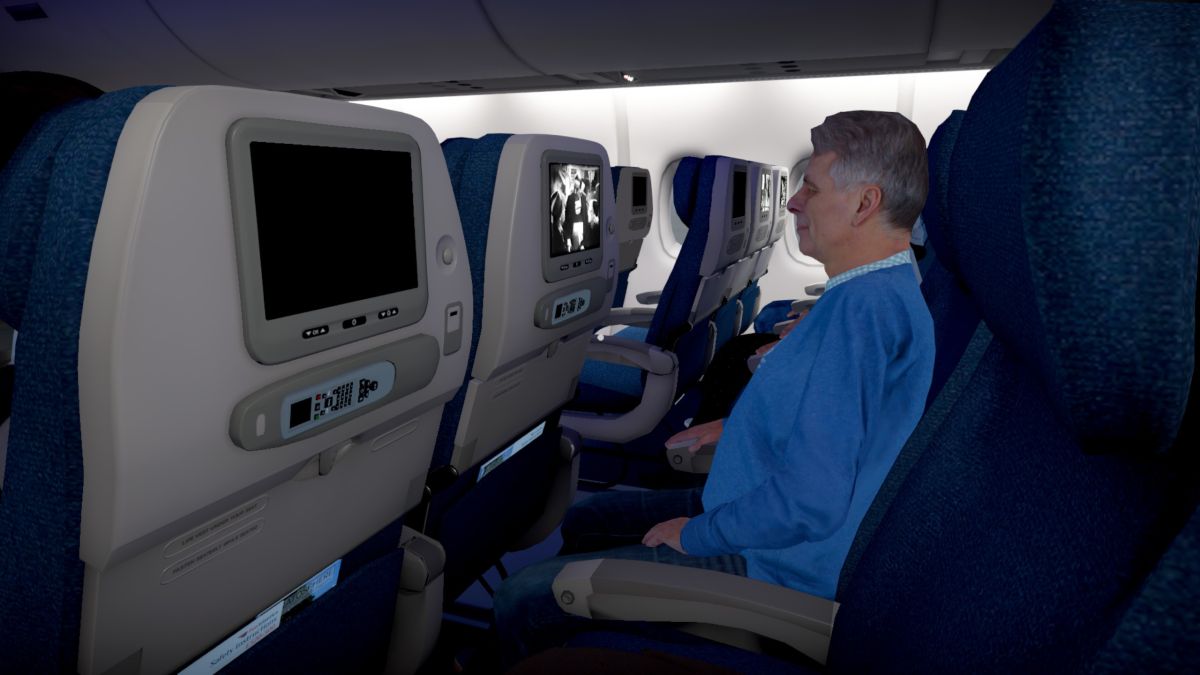 I’ve put on my headphones and I’m listening to music I don’t really like. I’ve flipped through a magazine, filled out part of a crossword puzzle, and stared blankly at a Sudoku before turning the page. I started watching a movie, messed with the lights and air conditioning, and looked through some photos on my phone, which is plugged in to charge.

Now I’m bored, which is a bad sign because the plane I’m on hasn’t even taken off yet.

In many respects, Airplane Mode is pretty realistic. This real-time first-person sim recreates the experience of being trapped in an airplane seat on a commercial flight lasting for hours—and while you’re spared the nightmare of boarding, you do have to wait on the tarmac for quite a while before take-off.

There’s a lot to do while you’re sitting there, from reading to watching movies to doing puzzles to playing around mindlessly with your phone, but none of those things will keep you engaged for all that long and you’ll quickly resort to staring out the window at clouds, glancing around the cabin, and checking the remaining flight time to see only a few minutes have passed since the last time you checked. Just like you would on a real plane.

Not all of Airplane Mode is that realistic, though. For instance, there’s an empty seat next to me. I can’t remember the last time I flew where we weren’t all packed in shoulder to shoulder.

Also, the guy sitting in my row doesn’t mind the fact that I’ve turned on his reading light and air nozzle full blast, that I’m hogging the empty seat between us with my carry-on bag, or that I’ve taken roughly 20 pictures of him (I’m bored) and even made his photo my phone’s new background. Surely he’d complain a little in real life.

It’s about an hour into the flight where things begin to get weird, or scary, or glitchy. I’m not really sure which.

First, the audio begins to go in and out. Sometimes I can hear just fine, sometimes there’s a muted roar or a high-pitched ringing. I’m not sure if this is meant to simulate the pressure change that sometimes causes your ears to get all stuffy, but there’s no option to chew gum, swallow extra hard, or wiggle my jaw back and forth to make my ears pop, which is what I usually need to do on planes to clear my head.

At one point, my vision grows dark for several minutes, to the point I almost can’t see at all. Is the game telling me I’m sleepy, or sleeping? Is it because I took several pills I found in my carry-on luggage? Did I die and I’m really in purgatory, as modern air travel can sometimes make you wonder? I have no idea, but it’s alarming.

Turn up the sound all the way in the gif below, and tell me you hear it too. It happens twice, once at the beginning and once at the end.

The most terrifying thing of all is that there’s no food or beverage service. There’s supposed to be. The flight attendant strolls over pushing an invisible drinks cart, and I order a soda, but she just keeps walking in place in the aisle. I never get my drink or the option to order a meal. This is true horror.

The seat belt sign is off, and I can click on the lavatory sign which makes me think I should be able to visit the bathroom, but I can’t get up, possibly because the flight attendant is stuck in the aisle, her legs slowly making walking movements but never actually moving her anywhere. She’s stuck, so I’m stuck.

There’s an in-flight chat program that lets you invite other passengers to text each other, but no one ever answers me no matter how many times I try. Eventually the seat-back screen breaks down just like the flight attendant did. The menu stops working so I can’t watch movies or play solitaire or even see how much time is left in my flight. My phone has been plugged in the whole time but never seems to charge. I’m trapped in my seat on this plane that took off from hell and is headed right back there, and I can’t even get a stale croissant filled with unmelted cheese or a plastic cup of ginger ale.

Either by accident or design, Airplane Mode is a horror game. There’s not even an option to stop playing. The only way off this plane is to use Task Manager to make it, y’know. Crash.