The first bang, which woke Lucas Timmons up, sounded like a slamming door. The second, followed by shattering of glass, got him out of bed.

Blearily inspecting his Toronto condo, Timmons found broken glass. A hole was punched through a framed photo across the room. On the ground was a bullet, splayed open on impact.

The shots had come through a wall from a neighbouring apartment, which Timmons says is frequently rented out online. Police later arrested five people and recovered a gun and ammunition.

“If I had got out of bed after the first noise, I could have been shot,” he said. “I think it’s pretty clear – no one should have bullets flying into their apartment.”

The stray bullets at the Ice Condos building early on Tuesday marked the latest in a string of unnerving incidents linked to thousands of short-term rental units in Canada’s largest city.

Toronto is grappling with chronic housing shortages, and critics say the blame lies partly with Airbnb and other companies which rent out large portions of residential buildings for short periods.

Despite previous efforts by the city to clamp down on these “ghost hotels”, thousands of short-term rental units remain online.

Campaigners say such properties are subject to little oversight, while long-term residents say temporary occupants often break rules – or the law: since 2016, there have been 10 shootings – including a triple homicide – two stabbings and one kidnapping at short-term rental units in the city. 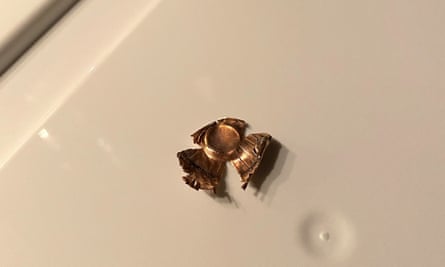 A bullet which was fired into Lucas Timmons’s apartment. Photograph: Canadian Press/Rex/Shutterstock

Tuesday’s incident was the second accidental shooting at Ice Condos: two years ago, a man in his 20s staggered bleeding through the lobby, after a gun was accidentally discharged in another short-term rental unit.

The unit in Tuesday’s incident does not appear to have been rented through Airbnb, which controls roughly 95% of the city’s short-term rental market. Duka property management, which oversees operations of Ice Condos, did not immediately respond to a request for comment.

“The [latest] shooting is really my worst fear realized,” said Becca Young, who lives in the building with her husband and young son. “And this comes after three sleepless nights of loud parties nextdoor, held during the Covid-19 pandemic.”

Young, who has written about the challenges of living in a “ghost hotel”, says the latest scare has prompted her family to finally move out.

The incident is also likely to further exacerbate tensions between rental companies and elected officials.

Last year, Toronto city council created new bylaws forcing landlords to live at the homes they list online (including those posted on Airbnb) and sign up on a central register. The new rules also limit operators to listing three bedrooms at a time.

“When investors and companies have all this housing stock, there isn’t really any oversight, accountability or transparency as to what is going on in them. And so we get what happened this week: violent incidents and parties and general neighbourhood disruptions, all tied to ghost hotel units,” said Thorben Wieditz of the housing advocacy group FairBnB. “People in this building are genuinely scared for their lives.”

Wieditz is hopeful that the new regulations, which go into effect in early 2021, will further rein in the side-effects of short-term rentals and free up housing stock.

For Timmons, the shock is still raw. “I haven’t cleaned up all the glass off the floor … I don’t think it’s hit me quite yet. I’m not sure what it’s going to be like when I try to go to sleep tonight, but I’m not looking forward to that.”